New TB vaccine could save millions of lives, study suggests

Each year there are 10 million new cases of tuberculosis, the world’s most lethal infectious disease 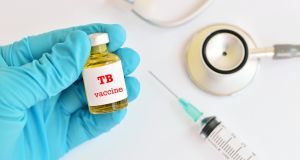 When preliminary trial results of the new vaccine were released a year ago, the World Health Organisation called it ‘a major scientific breakthrough’. Photograph: iStock

In what may be a watershed moment in the fight against tuberculosis, the world’s most lethal infectious disease, an experimental new vaccine has protected about half the people who got it, scientists have reported.

While a 50 per cent success rate is hardly ideal – the measles vaccine, by contrast, is about 98 per cent protective – about 10 million people get tuberculosis each year, and 1.6 million die of it. Even a partly effective vaccine may save millions of lives.

A year ago, when preliminary trial results of the new vaccine were released, the World Health Organisation called it “a major scientific breakthrough”.

Researchers not involved in the vaccine’s development were enthusiastic about the latest results, but said it needed to be studied in more people and in different populations. “The vaccine looks promising, and likely better than our century-old BCG vaccine,” said Dr Mario Raviglione, a global health expert at the University of Milan who headed the WHO’s global tuberculosis programme from 2003 to 2017. BCG protects infants against some types of tuberculosis, but does not protect adolescents or adults against the form that attacks the lungs, which is the most common type.

Giving two shots one month apart, said, is simpler than current prevention practice, which requires that patients take protective antibiotics every day for a month.

An important question raised by the study, researchers said, is who should receive the vaccine

Also, using antibiotics for prevention increases the risk that antibiotic-resistant TB will appear, while a vaccine does not.

Because so many people die of tuberculosis, Dr Seth Berkley, chief executive of Gavi, the Vaccine Alliance, a public-private partnership that buys vaccines for poor countries, said his agency would “certainly give the vaccine a hard look”. Gavi already supports some vaccines that are only partly effective, he noted. For example, some vaccines for human papillomavirus, or HPV, stop only 70 per cent of the strains of the cancer-causing virus, and a new malaria vaccine being field-tested in Africa is only 39 per cent effective.

An important question raised by the study, researchers said, is who should receive the vaccine.

Tuberculosis rates vary enormously not just between countries, but even from neighbourhood to neighbourhood. The disease thrives in people who live in crowded conditions, inhaling one another’s germs, and the bacterium dies quickly in sunlight.

Tuberculosis can be transmitted even through something as simple as a cough on a crowded bus. But the people at the highest risk include family members of patients with active tuberculosis, the doctors and nurses caring for them and, in countries where tuberculosis is common, people living or working in crowded conditions, such as prisoners and miners.

But in any country, people are also at risk of infection if they have HIV, are severely malnourished, are taking immune-suppressive cancer chemotherapy or organ-transplant drugs, have diabetes or are on dialysis.

The new study, however, tested the vaccine only in people who were HIV-negative and whose blood tests showed they had latent tuberculosis.

But at least a quarter of the world’s population would come up positive for latent tuberculosis on a blood or skin test. The result means only that they have been exposed to tuberculosis germs some time in the past. “We have no idea if they have been infected in the last month or 20 years ago,” Raviglione said. Those infected long ago may have already have cleared their bodies of the infection.

Most people who are ever going to develop active tuberculosis do so within two years of their first infection. Therefore, some prominent researchers argue that latency tests greatly exaggerate the number of people at risk. As a result, relying on them would cause many more people to be vaccinated than could benefit.

Dr Lalita Ramakrishnan, a tuberculosis expert at the University of Cambridge, noted that participants in the vaccine study were less likely to develop active tuberculosis in the first year than in the second.

That result – the opposite of what would normally be expected, she said – implied that the careful screening done by the GSK team for the clinical trial, which included taking medical histories and sputum samples, must have weeded out people with early-stage tuberculosis.

To pick people who would benefit most from the vaccine under normal circumstances, she argued, a more accurate diagnostic test must be developed. Alternatively, the vaccine could be restricted to people at obvious high risk, such as nurses in tuberculosis wards – but that would miss too many potential beneficiaries.

In the future, experts said, the GSK vaccine should be tested on people with HIV and on people in other countries, because susceptibility to tuberculosis appears to vary widely.

The authors agreed, saying: “These results need confirmation in larger and longer studies conducted in a broader range of populations.”

Those groups should include people who did not test positive for latent tuberculosis, and people of varying ages and races.

It is not known whether genetic differences make some people more susceptible to tuberculosis, or whether the bacteria circulating in various countries vary in infectiousness. – New York Times