‘My sister is like the mermaid from Minecraft – very rare’ 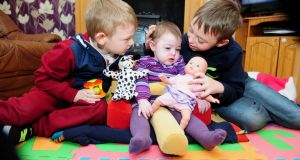 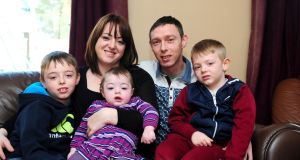 Dawn Connelly and Alan Cullen with their children, Rio, Holly and Dara, at their home in Edenderry, Co Offaly. Photograph: James Flynn/APX

It’s the milk going through a tube into the tummy of one-year-old Holly Cullen that her brothers’ friends find most interesting when they come to visit.

“I never hide anything,” says their mother, Dawn Connolly, who tries to keep playdates at home in Edenderry, Co Offaly as normal as possible for sons Rio (eight) and Dara (five).

Once when a friend was in and asked Rio what was wrong with his sister, she overheard him reply: “She’s like the mermaid from Minecraft – very rare.”

Dawn and Alan Cullen had no idea there was anything wrong with their baby daughter until one Sunday, seven weeks after her birth, Dawn thought she looked a bit funny.

“I picked her up but she was okay. But the very next day she was in my arms and she had a seizure.”

It has meant frequent hospital stays and Dawn believes this is what the boys find hardest. “Dara would miss me the most, he’s only five,” says Dawn. “When I come home from hospital, he is just so demanding of my time. He really, really misses me.”

But she is so glad her sons are close. “They fight all the time,” she laughs, “but they look out for each other.”

When she is away with Holly and the boys are being minded by other people, “the one certainty they have is that they have each other”.

Before this interview she asked them did they mind having a sister with special needs. “Rio said, ‘No, because we will always be there to mind her but I just don’t like seeing her in hospital when she is really sick.’ ”

The monthly 40 hours of nursing care she gets for Holly at home from the Jack and Jill Children’s Foundation are a “godsend”, says Dawn, because she can use them to spend time with the boys.

“Sometimes we would go down to the shops for a hot chocolate and a bun, to give them my undivided attention.” Or she might use some of the hours to watch Rio play a football match at the weekends.

Holly’s current medication is reducing the number of seizures she has a day, leaving her more alert and interactive, which is great for the boys, says Dawn.

“I don’t want them to be afraid to go over and roll with her.” And they enjoy pushing her around the house in a chair with coaster wheels.

Her husband, Alan, is a self-employed plasterer and works long hours.

Another worry is for their sons’ future kids, Dawn explains. They don’t yet know the cause of Holly’s condition, whether it is genetic or a once-off, but they hope to find out through blood tests.

Meanwhile, the prognosis for their daughter is uncertain and they don’t know if she will ever walk or talk.

“A lot will depend on control of the seizures,” Dawn adds. When they occur less frequently, the family can all see “Holly shining through”.

Róisín Ingle: How Taylor Swift helped me navigate the puzzle of parenthood
8