Marriage pact: If we're single in 10 years we'll marry each other 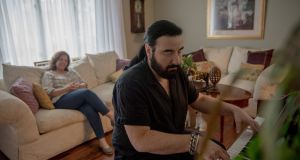 When Paige Anderson was 20 years old, she made a pact with her best friend, Grant Lowe: If the two remained single by age 30, they would get married.

On June 8th, 2014, aged 22 – eight years before the deadline and the day after graduating from college – Anderson (now Paige Lowe) and Grant Lowe wed. Their initial informal promise was a safe way to flirt, because the two were afraid to reveal their mutual feelings.

“You can back out of it if no one believes it; you can tell yourself it was just a joke,” said Paige Lowe, noting that her husband once agreed to a similar arrangement with a friend from high school. (Grant Lowe has no previous marriages.)

The verbal contract between the Lowes was a conversation opener to their progression beyond friendship. But, often, small-talk marriage pacts are not binding. They are guided by the fear of being alone, according to Lynn Saladino, a clinical psychologist in New York who focuses on relationships. “It’s one of people’s biggest fears in dating,” Saladino said. “They want to know they’re not going to be by themselves long-term – that someone’s going to be there.”

John FitzPatrick met his best friend Moira Appicelli in high school in New Jersey. “I saw her walking down the hallway, and I knew that we were going to be friends forever,” the now 50-year-old said. Although neither party was ever romantically interested, when they were in their 20s, the two devised a solution to being perpetually single, Appicelli said. “If we’re not married by 40, we should just get married.”

The pact resurfaced when FitzPatrick, then 36, suffered from sciatica. He considered back surgery, but didn’t have health insurance. Appicelli offered to marry him, so he could utilize her benefits. “At that point, I was already with my now-husband,” whom, FitzPatrick added, he legally married three years ago.

Beyond hidden feelings or inheriting job perks, marriage pacts are also forged for emotional support. “People are looking for a sense of security and having backup in case something doesn’t work out,” said Saladino. “People like to know that they’re going to end up with someone, and also someone that they like.”

About a year after promising to be life partners, when both were single and 18, they unexpectedly became pregnant with a boy. “We weren’t together,” Dawn-Maia Simmons said. “We weren’t a couple. We remained friends who had a baby together.”

Arranged marriages, in some aspects, are similar to marriage pacts between friends that aren’t induced by passion. Some lead to falling in love, anyway

The relationship didn’t evolve until Jason Simmons suggested they move in together. In 2000, at 21, they decided to marry, validating their marriage pact on Valentine’s Day. “Through all the things that we’ve been through, our friendship has saved us every single time,” said Dawn-Maia Simmons, who has been married 18 years and also has a daughter with Jason Simmons. “It’s not been the kids. It’s not been financial. We still enjoy the things we did as teenagers: going to concerts, sitting around laughing at dumb TV shows and watching movies. Our time together after all these years has been the most valuable thing.”

Deep friendships and commitments are necessary for successful relationships, according to Angelica Magana-Rossin, a marriage and family therapist. “Overcoming the challenges is a lot easier when there is that base. There ends up being an implicit contract to work on something: even if it feels hard, even if it doesn’t feel magnetic or intoxicating anymore; to work toward creating these dynamics.”

Arranged marriages, in some aspects, are similar to marriage pacts between friends that aren’t induced by passion. Some lead to falling in love, anyway. “There is an agreement, first and foremost. People agree to show up in the relationship and make the best of it,” said Magana-Rossin. “When there are fewer options and more direct focus, that really can help make the relationship a lot more intentional.”

There can be some confusion, though, about pacts themselves. Saladino advises both parties of the agreement to be transparent about their realistic objectives when verbalising the future. “It depends how seriously each person is taking the pact. If they are restricting themselves from putting themselves out there, that could potentially hold them back from some very good partners.”

Alissa Jacob, (32), made a marriage pact with her childhood best friend Joey Kuhn. “It was always pretty clear that he was going to be coming out of the closet,” said Jacob, who refers to Kuhn as “hubby,” even though she is engaged to someone else. “We talked about having a kid together or living together like Will & Grace. It was never going to be a sexual marriage.”

Jacob does, however, plan to wear a white wedding dress down the aisle at Kuhn’s wedding, should he get married. “I still call Alissa ‘wifey’,” said Kuhn, (33) and a filmmaker, who has a long-term boyfriend. “She’s like, ‘you will be his husband, but I will always be his wife’.”

It isn’t only the pact-makers who have the potential to be disappointed by those hypothetical promises.

Years ago, FitzPatrick visited his father, nearing the end of his life, in the hospital. “He was in bed, and he goes, ‘John, you married Moira, right’?”

“I could see the puzzled look on his face. He forgot that I was gay for a second,” said FitzPatrick, who had been with his life partner for 14 years at that point.

And then, it clicked. His father, speaking about Appicelli, said, “I always loved her.”

FitzPatrick, who remains close to Appicelli, replied, “I know dad. I still do.”