Training in the summer heat? Beware of heatstroke

But even in temperate climates such as ours (it is raining outside at the moment isn't it?), excessive heat can hinder athletic performance and, sometimes, be fatal. 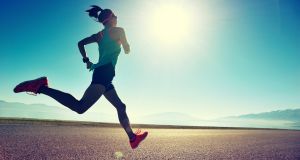 If runners experience severe fatigue they must slow down to increase their chances of avoiding heatstroke. Photograph: iStock

It’s summer, the sun’s out (one hopes) and many readers will be training for or competing in many outdoor activities from cycling to triathlon to running.

But even in temperate climates such as ours, excessive heat – whether generated internally by an exercising individual or externally by environmental conditions – can hinder athletic performance and, sometimes, be fatal.

For example, in 1999, after finishing a 10km event in Dublin, a 24-year-old woman died from heatstroke, as did a 42-year-old man following his collapse 40 metres from the finish of the 2014 London Marathon.

Pathologists in both cases implied that dehydration might have had a role to play in the fatal outcomes. For instance, in the England case, Dr Michael Osborn gave the cause of death as hyperthermia, saying: “Like heatstroke, it could be caused by dehydration, the temperature of the area, and it could all come down to genetic factors – some people are more predisposed to it.”

Dehydration as a possible cause of heatstroke? It seems reasonable to speculate that the combination of heat, exercise and sweating in an activity like running might include dehydration as an influential factor. After all, many remember the Great Water Controversy during Ireland’s participation in the 1994 World Cup in the United States. Manager Jack Charlton’s attempts to deliver water towards his apparently near-moribund players evoked the Baths of Caracalla with goalposts.

“The problem is that there is now no evidence that dehydration plays any role in the causation of heatstroke.” That was the unequivocal statement from Prof Tim Noakes, co-founder of the University of Cape Town’s Sports Science Institute of South Africa and who reported in 1985 the first cases of exercise-associated hyponatraemia, caused by the voluntary over-drinking of fluids, including sports drinks. His statement appears in Waterlogged: The Serious Problem of Overhydration in Endurance Sports (2012) where he notes that of almost 2,000 documented cases of heatstroke in the medical literature, only six occurred in the marathon or longer distances, but many occurred in short-distance races of three to nine miles, “which are over well before the athletes can become dehydrated. Thus, something other than dehydration causes heatstroke.”

Before considering what this “something” might be, what is heatstroke?

This year the journal Prehospital Emergency Care published a consensus statement on the prehospital care of exertional heatstroke (EHS). EHS is defined as that which occurs among those actively exercising, typically in warm environments, although it “can also occur with exertion or impaired heat dissipation in cool environments . . . EHS is characterised by severe hyperthermia (>40.5°C) and end organ dysfunction, which typically manifests as central nervous system dysfunction”.

EHS will tend to occur when the heat generated by muscular activity outstrips the body’s ability to transfer heat to its surroundings, resulting in a temperature rise, triggering cellular damage, an inflammatory response and the release of toxic chemicals. As for treatment, the consensus statement says: “Cold water immersion is considered to be the gold standard treatment for EHS.”

How often does EHS occur?

Last year the British Journal of Sports Medicine reported a six-year study of 11 UK triathlons: “Of 68,557 starting competitors, 429 casualties presented to the Triathlon Medical team. Twelve (2.8 per cent) were diagnosed with EHS, giving an incidence of 1.74/10,000 starters. Eight EHS casualties (67 per cent) collapsed during the run phase, with three collapsing after the finish-line. One EHS casualty presented during the swim phase in cardiac arrest.”

And a team led by Dr Ralph Smith of Oxford University Hospitals NHS Trust writing in the journal BMJ Case Reports (2016) observed that while humidity and temperature are important factors, EHS can occur in cooler environments, often in shorter races, where conditions might be assumed to be safe: “The Great North Run (UK) in 2009 . . . peak ambient temperature of 18°C reported 55 cases of EHS among the 55,000 participants”, an incidence of about one in 1,000.

Who is most likely to be affected by EHS?

Possible predisposing factors include having a feverish illness, increasing age, sleep loss, lack of heat acclimatisation, previous heatstroke and certain drugs and medications. Interestingly, the title of the BMJ Care Reports paper chimes with Dr Osborn’s statement above, speculating on a possible genetic influence. In Too much of a coincidence’: identical twins with exertional heatstroke in the same race, the researchers describe how two well-hydrated male twins, acting as pacers in a UK city marathon in relatively cool conditions, collapsed after 30km and 33km, suggesting there may be a possible genetic predisposition to EHS.

As to the “something other than dehydration” as a cause of heatstroke, Prof Noakes suggests the simultaneous occurrence of several factors: an individual susceptibility like an underlying muscle disorder; an initiating factor like an infection or a chemical agent (including amphetamines or cocaine); and moderately intense exercise. Clearly, a hot, humid environment will accelerate the body temperature rise to trigger the characteristic features of heatstroke “if the brain fails to slow the athlete down soon enough as it should. According to this explanation, dehydration need play no part in the production of heatstroke”.

The brain’s influence as the “central governor” (proposed by Noakes) is highlighted by Dr Smith’s team, noting that when we experience heat stress our running intensity reduces. However, they also cite suggestions that competition can induce individuals to override this protective mechanism, reporting that in the case of the twins they describe, “[B]oth athletes . . . remarked on the psychological pressure to maintain their pace time and recalled ignoring internal cues of fatigue.”

Dr Smith and his colleagues offer some useful advice that those readers determined to finish a race at all costs should bear in mind: “Runners should be aware of EHS and reminded that if they are experiencing severe fatigue they must slow down. This will help their chances of avoiding EHS, especially in warmer conditions.”