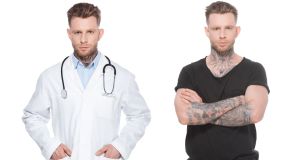 Would you trust this man to treat you? Photograph: iStock

There was a huge response to the recent column on whether tattoos, body piercings and dress style affected professionalism. Thank you to everyone who got in touch with some fascinating feedback.

More women than men responded. While some view body art positively, there was more in the way of resistance to health professionals sporting tattoos and body jewellery. And the potential hygiene implication is a big issue for many of you.

“There must surely be hygiene issues related to oral and nasal piercing for the person concerned, and so therefore for a person being treated by a medic with those piercings”, was a typical response.

One self-described “oldie” (but young at heart) said: “I would like my doctor to wear smart casual clothes . . . would like them to cover tattoos while attending patients, and no piercings please.”

A male reader reported the following thoughts after reading the piece: “People’s competence cannot possibly be judged from a photograph; very often, people who do not look ‘our type’ evoke a positive feeling as one approaches, and vice-versa.”

A retired nurse with a chronic illness had this to say: “Some of the most arrogant, obnoxious doctors I’ve met wore fine suits and shiny shoes. Some of the loveliest, most caring, dedicated, efficient doctors I’ve come across wore casual clothes. I haven’t come across tattoos or piercings, but they wouldn’t bother me in the least. Clothes do not maketh a fine doctor,” she concluded.

“If a medical professional were to present to me with large-scale tattooing, I would be horrified, and my confidence in that person would be compromised,” was the forthright view of a man in his 60s.

“I would be horrified to see tattoos or a nose ring on an attending doctor, because it would suggest a risk-taking personality that might impact on my own care and health” was another interesting response from a reader.

“If I were admitted to an emergency department I wouldn’t mind what the doctor was wearing – tattoos, nose rings, etc, as long as he/she had kind eyes and a voice to match,” was a benign view and one echoed even more strongly by the reader who said: “I do not consider tattoos to be an indicator of poor professionalism. In fact, I would be more inclined to think of someone coming to my bedside with tattoos to be more open-minded and accepting, and more likely to listen to what I had to say rather than a stuffy-shirt authoritarian-type doctor who was going to decide what was best for me without any consideration of my opinion or my thoughts on my own or my children’s healthcare.”

Female consultants left a less-than-positive impression on one woman and her husband. She did not appreciate a biopsy performed with “extra-long painted nails”, while her husband was taken aback by an eye specialist wearing a particularly low top. He reportedly didn’t know where to look as he was asked to “look up, look down” during a close-quarters examination.

Finally, there was the reader who offers two perspectives – as a doctor and as a patient. “As a patient, I prefer doctors wearing at least shirt, tie and trousers, or in females, if wearing a skirt it should be long or calf length, not mini,” she said.

“As a doctor, I remember wearing a white coat over my clothes as a junior doctor even in sunny weather . . . it covered a multitude of sins. I saw a female junior doctor with handbag, ankle chain, low-cut top, mini skirt and ankle tattoo the other day . . . She wouldn’t have looked out of place at a nightclub and the overall impression was that she was going on a date.”

Do doctors’ tattoos and body piercings pose a hygiene threat to patients? I don’t know, but I’ll look into it and report back.