Laura Dockrill, who had a baby six months ago, credits singer with helping her recover 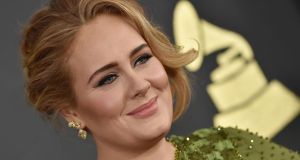 Adele: “I was on the phone, FaceTiming her, and she was the first one to detect what I might have,” Laura Dockrill says. Photograph: Axelle/Bauer-Griffin/FilmMagic/Getty

Adele’s best friend has credited the singer with being the first person to spot that she had post-partum psychosis, a mental illness that affects one in 1,000 mothers and can lead to hallucinations after childbirth.

“She recognised it in me. I was on the phone, FaceTiming her, and she was the first one to detect what I might have,” Laura Dockrill, a poet, author and illustrator who met the singer when they were both students at the Brit School of Performing Arts, told the BBC.

Dockrill, who gave birth to a baby boy earlier this year, says she has experienced insomnia, delusions, suspiciousness and paranoia. “The last six months can only be described as hell, it’s been the worst time of my life.” She has written a blog post to share her experience with other mothers facing the same difficulties. Adele called Dockrill’s story intimate and heartbreaking when she shared it on social media this week.

On her blog Dockrill writes about a “horrific” labour that her doctor believes may have marked the start of her illness, adding that after she brought she son home she felt as if “I had pushed out my personality as well as a baby”.

She also writes that she thought about suicide. “I was begging my sister to let me go, I was begging my mum to let me go. I have never had those thoughts before in my life and no history of mental illness, this completely took me by surprise and threw me against the rocks.”

Dockrill, who says that her skin turned pale and that she couldn’t eat or drink and began to have anxiety attacks, asked her partner to send her photographs of herself with friends and family, so she could remember who she was.

“Even though postnatal depression and the psychosis are both treatable, even when my doctor said I would 100 per cent recover, I remember thinking, ‘Maybe others do but not me, this is me forever’.”

After two weeks in hospital, Dockrill says is now “happy, confident and strong” after receiving medical care and support from her family. She credits talking about her condition with being a huge part of her recovery. “I was constantly searching for any stories that offered me hope or salvation in this dark and testing time so that’s why I’ve shared this,” she says about her blog post.

On Monday Adele tweeted to praise her friend and share a link to the blog, saying that Dockrill “has written the most intimate, witty, heartbreaking and articulate piece about her experience of becoming a new mum and being diagnosed with post-partum psychosis.”

Turbocharge your barbecue: Tips from the pros for cooking over flames
7

Four decent bottles if you’re just getting to know wine, including a great-value sparkler
8

From Marianne to Claudia Winkleman: The rise of the lockdown fringe
10