How women, from Ireland and abroad, are redesigning breastfeeding

Breastfeeding can be a stressful and painful process. Can a generation of female tech professionals create devices to change that? 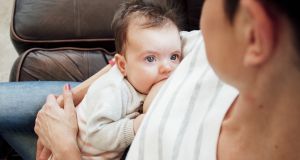 Looking at the small, personal picture – breastfeeding can be bloody difficult. More than difficult, in fact; it can be complicated, painful and stressful.

Breastfeeding is a complex subject. Looking at the big, societal picture, there are the endless news stories on the subject, veering from women being shamed for feeding their babies in public, to making strides towards normalising it. There are the so-called “breastfeeding wars” and related moral judgements; just this month, the Royal College of Midwives in the UK updated its advice to clarify that a woman’s choice about how to feed her baby “must be respected”.

And that’s because – looking at the small, personal picture – breastfeeding can be bloody difficult. More than difficult, in fact; it can be complicated, painful and stressful.

It’s a situation that Dr Helen Barry, co-founder and chief research officer of Dublin-based startup Coroflo, understands well. Her company is in the final stages of producing a high-tech milk-monitoring system that accurately measures how much a baby has consumed. And it was inspired by her own experience.

“When I was pregnant with my first child, I was determined to breastfeed,” she says. “But when my son was born, he weighed less than five pounds at full term, and weight gain suddenly became very important. His latch was perfect, he had no tongue tie, he was breastfed on demand, but he wasn’t gaining even close to enough weight.”

Barry and her husband, Jamie, monitored the number of nappies used, she continues, and had weekly weigh-ins. A lactation consultant tried to get an accurate idea of milk intake with pre-and post-feed weighings, but these weren’t at all accurate. In the meantime, they kept searching, unsuccessfully, for a product that would tell them how much milk their baby was consuming. “Jamie is an engineer and, coincidentally, was working on flow monitoring in another sector, when he had an idea,” she says.

And so Coroflo was created. CEO Roseanne Longmore explains that the first version was “a bunch of wires and electronics on a bench”, but the product is now the same size and shape as a standard nipple pad, and uses micro sensing technology to measure the force of the breast milk against a paddle – in effect, a nipple shield, with a sensor. This gives an accurate, real-time volume measurement via an app, so parents can be sure of how much milk their babies are receiving.

As Coroflo prepares to launch in the UK in 2019, following its market debut in Ireland this year, the feedback from breastfeeding mothers has been “resoundingly positive”, says Longmore. The company is also receiving plaudits from the tech community, taking top prizes at Web Summit and TechConnect Live.

“In an age of AI and blockchain, the judges seemed genuinely delighted by the simplicity of the Coro,” she says, “and how novel technology can solve a problem felt by mothers around the world.”

Former healthcare consultant Hina Zaman has a similar attitude towards using tech to solve parenting problems. She’s the founder and chief executive of Wellvine, an on-demand subscription healthcare app that links parents to healthcare specialists via video call. The service places a huge emphasis on breastfeeding, she says, because “that’s where the biggest need is”.

“The gold standard of breastfeeding is obviously the health professional sitting next to the mum, guiding her through whatever challenges she’s facing,” says Zaman. “But that’s not accessible for most mums.”

Instead, Wellvine charges users £20 (€22) a month and allows them to schedule unlimited calls with children’s health specialists, including lactation consultants. It is, Zaman says, a “modern solution for modern lifestyles”.

And it is working: the company launched in July 2015 and was generating revenue by the following January. It has seen steady growth since, primarily through word of mouth; about three-quarters of new customers are now referred through other users, says Zaman.

Her aim, she continues, is to eventually be able to offer the service for free, possibly through partnerships with health services. And at present, she continues, those services are not working well for women who are having difficulty breastfeeding. Zaman’s research suggests that many women struggle to access the services they need, with some even being chastised for wasting doctors’ time. This lack of support contributes to the 80 per cent of women who stop breastfeeding before they want to, she says.

“Typically when mums come to Wellvine, they’re in a vulnerable state and everything is unfamiliar,” she says. “They’re usually trying to get support, but are feeling let down. Becoming a new parent is one of the most challenging transitions in most people’s lives, and getting the right advice at the right time can be monumentally difficult.”

The conversation around breastfeeding is also taking place on the other side of the Atlantic. Back in 2014, the Massachusetts Institute of Technology (MIT) held its first “Make The Breast Pump Not Suck!” hackathon, tasking participants with improving the often unwieldy technology around pumping. The event spawned several companies that are still going, including Mighty Mom, Uboost and LacTeck. But when MIT decided to stage the second hackathon this year, they opted for a different focus.

“2014 was great and lots of wonderful innovations came out of that,” says Jenn Roberts, equality lead for the 2018 event. “But one of the products that came from that was on the market for $1,000 (€883). It doesn’t take a genius to see that a lot of the parents who need access to that innovation can’t afford it.

“So this time we focused on the most marginalised in our society: women of colour, the immigrant community, the LGBT community and low-wage workers.”

The results are once again impressive, with winning projects including a pop-up shelf for pumping in unsanitary public places; a lactation kit for use in disaster zones; and a virtual reality app.

Roberts says the success of the events is, in large part, because they are led by women, as the industry itself should be. “A lot of people don’t understand breastfeeding very well,” she says. “They think your body is meant to do this and it’s going to do it, so we’ll just give you this thing and suck it and it’ll be fine. A lot of it has to do with the fact that we aren’t included. The men making these devices don’t have to pump, so they don’t know. The women, the moms, need to be at the table.”– Guardian

‘Oh my God, how do you stand there and know that the whole nation is looking at you?’
8

Irishwoman in Vancouver: ‘I still go to the office but the city is surreal and lonely’
9