In times gone by, strong tonic wines, coca and golf were seen as cures for cases of ‘nerves’ 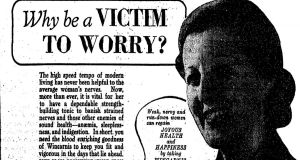 In this newspaper’s first decades, both major and minor mental health problems were regularly lumped together under the euphemism of “nerves”.

And though many proposed “cures” could not have helped serious illness, some suggestions on improving mental health – and its influencers – echo contemporary thinking.

A new medical treatment for “nervous disorders” in 1876 – “a total change of diet without the aid of medicine” – was rejected by our correspondent: “Where over work, mental strain, grief, religious despondency, or ennui are concerned in the matter … there can be nothing like a total change of scene and surroundings,” he said. “Half the nervous disorders of middle-class women are due to the monotony of their lives.”

How to Cure Despondency in 1889 recommended exercise for “easing the vessels of the brain” – “15 minutes of dumb-bell exercise just after the bath . . . half an hour or more of the same in the afternoon, and two hours at least of good hard walking every day, in spite of the weather.”

In 1954 doctors found “that twenty per cent of patients are suffering from “twentieth-century blues” … the pace of life, housing difficulties and, perhaps fear of the atom bomb have combined to make the ‘stress’ group of complaints the most potent.” Our writer claimed that stress was almost unknown in Victorian times. However in 1892, a Dr Pye Smith had decried: “the oft-repeated assertion that … the close of this nineteenth century is fuller than any other of what is called worry and anxiety, mental excitement, over strung nerves, and what not. Railways and telegraphs and the modern race for success are said to be shortening life, and … there is an enormous increase of what are called nervous disorders.”

According to Dr Smith: “Family troubles, misunderstandings and quarrels, disappointments and annoyances, bodily aches and pains, bills that cannot be paid, and accounts that will not balance, were just as common a hundred years ago as now.”

Warnings about the impact of new technology on mental health are nothing new. As early as 1887: “A well-known Boston doctor has committed himself to the statement that there has been a marked increase in nervous, cerebral, and pulmonary disease since the telephone was added to the resources of civilisation. The doctor declares … that nervous disorders, which in former days were chiefly found amongst women, are far more common amongst men since the introduction of the telephone.”

Links between gut health and mental health are currently being researched but in 1894 an article had warned: “worry and anxiety which depress the brain produce simultaneously a semi-paralysis of the nerves of the stomach, gastric juices will not flow, and presto! There is indigestion.”

And in 1906, reader JK Pascha was told: “It is dyspepsia which causes all your symptoms – the palpitation, pain in back and shoulder, specks before eyes, and mental depression and apprehension.”

Chemists and quacks, keen to promise cures for “nervous debility”, also linked the stomach’s – or liver’s – behaviour with the mind. According to advertisements for Holloways pills in the 1860s: “Some defect in digestion is generally the cause of mental depression; on rectifying the disordered stomach, the long list of gloomy thoughts retire, and are succeeded by more helpful and happier feelings.”

Zoedone phosphorus tonic in the 1880s was described as: “invaluable for indigestion and weakness of the stomach brought on by fatigue, anxiety, overwork, or mental depression.” Another popular product in that decade was EC West’s Nerve and Brain Treatment, while Dr Williams’ pink pills claimed to “meet the needs of pale, weak, nervous women” and “men and women with low spirits”.

The use of tonic wines such as Wincarnis – with alcohol contents of up to 20 per cent – to treat “the nervy, depressed, and out-of-sorts” was common, and even more alarmingly some tonic wines contained coca extracts, like Hall’s, suggested in 1910, “In all cases of nervous disorders”.

Our health correspondent wrote about “the increase in nervous disorders” in 1901. A seaside rest, with bathing and a daily “cold wash all over” was prescribed, with “no forced exercise, plenty of milk and plenty of eggs. The bowels ought to be kept gently open … he must sleep in a quiet room at night, and just do anything he possibly can to forget that there is anything the matter with him.”

Regular baths, and bowel movements, were usually part of prescriptions, in addition to tonics such as Fellows Syrup or medications. In 1919 Workman was prescribed “ten grains of ammonium bromide twice daily … This will act as a sedative to your excitable condition. Try and influence your mind to the right direction by finding some suitable mental relaxation.”

Meditation was suggested in 1932. “This is a restless age,” wrote our doctor, “and a ride at fifty miles an hour on the back of a motorcycle is more in keeping with the spirit of the age than meditation. Yet, quiet and peaceful thoughts are very conducive to mental health.”

“The best way to get rid of nerves,” according to our health columnist in 1940, is to “cultivate some pastime or hobby or occupation that takes up your attention and prevents you from thinking about yourself. Golf is often recommended to tired business men. For a few hours their whole soul is given up to getting that wretched little ball into a hole … If he succeeds the world seems to be a blaze of glory and sunshine. At the end he has at least had three hours’ freedom from worry about the income tax.”

Perhaps the most unusual prescription came that same year in another physician’s column: “It has been firmly established that in certain nervous disease a cure can be considerably helped by the right associations of colour.” Green was described as “soothing and quietening”, pink as “cheering” and purple “depressing”.

“For cases of nervous breakdown”, a three month programme was laid out, with the patient moving from one colour-scheme to another. The first three weeks were to be spent in “A room with pale green walls, pale grey carpet, clear yellow curtains, furnishings in a slightly deeper green than the walls”. The cure was completed by a fortnight’s sojourn in a room: “furnished with the cardinal colours: yellow walls, green carpet, blue curtains; and cushions and oddments in a riot of green, yellow, blue and red. It is stressed that these must be pure colours, and not subtle shades. The patient is then said to have completely regained his mental balance, and be fit to return to normal life.”

John Wilson: Four cracking Christmas wines from Dunnes, each for €14 or less
7