Daddy, dementia and me: He called them ‘tight gobsh***s with no sense of humour’ 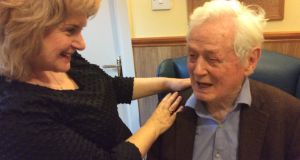 Since Daddy insists he is not “a f**king cripple” he refuses point blank to get into a wheelchair, even when his knees buckle under his bloated body. As well as dementia, Daddy has chronic heart failure.

He won’t wear nappies either, even though he can’t move quickly enough when the urge comes to empty his bladder.

I scarper when this happens, face flushed, heart racing, tears streaming from my eyes. I could never be a nurse nor a carer. I don’t want to witness these indignities. I don’t want to know about the intimate minutiae of my father’s decrepitude. I just want to think of him as the bold boy he always has been: infuriating and affectionate, obsessive and implacable, self-centred and sensitive.

Once when we were a gaggle of small children we were bundled one dark night into Daddy’s black Anglia and brought on a jaunt through the back roads of Co Offaly to the home of former TD Oliver J Flanagan – he of “there was no sex in Ireland before television” fame.

We were left in the car for what seemed like hours while George was on his mission to the local Dáil deputy. Being a child with a wild imagination, I assumed he was discussing some matter of national or even international importance. It was only recently the real reason for that visit was revealed in an increasingly rare moment of cold-clear lucidity.

“Daddy, do you remember that time you brought us all to Oliver J Flanagan’s house when we still lived in Tullamore?”

“Of course, I do, Áine. I wanted him to promote my bridge book. Do you know how many people politicians meet in a week?”

I had to smile to myself.

George wrote two bestselling bridge books back in the 1960s: “The Bones of Bridge” and “Some of the Flesh”. They would become the bibles for bridge players all over Ireland for years and, would you believe, copies can still be found on Amazon, or some such site, on sale for exorbitant amounts of money.

Which brings me to another little ditty about Daddy’s innovative selling skills. On a visit from his home in Dublin to Westport about 15 years ago, I dragged him along to a party being hosted by my friend, The Poet. Daddy’s abstemiousness due to his alcoholism came in handy on occasions. I could relax and drink a few glasses of wine and not worry about a taxi home from this rural cottage.

Well, that was until The Poet decided to read a couple of his recent verses to his most refined fan base who loved nothing better than the evocation of his pastoral images peppered with subtle ironies about life in the wild west of Ireland.

How did I not predict that this provided the perfect opportunity for George to whip out a copy of his humorous novel, “No Time for Work” for a reading of his own.

Whether the guests liked it or not.

“You introduce me, Áine, and I’ll go from there,” he whispered into my ear.

I nearly fainted with shock.

“No, Daddy, this is not the sort of party for your sense of humour.”

“If you don’t introduce me, Áine, I’ll do it myself.” He was speaking in his snarly voice. The voice I don’t like very much. I’ve never said Daddy was a saint.

Of course, I capitulated and the reading went down like a lead balloon.

Daddy called them “tight gobsh***s with no sense of humour” on our way home after he failed to sell any of the copies he brought everywhere in the boot of his car. I was furious with him, but when Daddy was on a roll he didn’t care too much what other people thought or felt. Even to this day.

As his body fails him and his organs break down, it is George’s indomitable spirit, his irrepressible boyishness, his capacity for detachment, that keeps him going.

It is why a lifetime of smoking Major has not killed him yet. It is why all those triple vodkas during his drinking years didn’t do for him either.

As he says himself in one of his much-quoted aphorisms: “Not caring is a sense of values, the person who cares is not the master.”