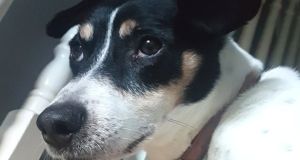 Tadgh: with us for nine years. Photograph: Paddy Logue

I shook my head at each question and the vet asked the work experience student to leave the small surgery.

It was obvious by question three that I wasn’t going to be able to able to keep my composure when I brought Tadgh to the vet to be euthanised, or put to sleep as they call it.

But as I held him – he was quivering, I was sobbing – on the vet’s table for the last time, the overpowering notion that I would never again see him, hold him, rub him, play with him and, yes, talk to him, again hit home.

Weeks have passed, but I can still hear those nails tick, tick, ticking on the wooden floors and I get a dagger through the heart

It’s still a little difficult to think about these final moments of interspecies friendship. It’s a bond as strong as anything else, I don’t care what anybody says. No amount of “he was just a dog” will make me feel any better. I am bereft.

He was about 12 years old and had been with us for nine years, which for the kids is more than or a large part of their entire lives.

He was there every morning when we got up and looked mournfully at us every night before we went upstairs to bed, as if to ask us to stay with him for the night.

Weeks have passed, but I can still hear those nails tick, tick, ticking on the wooden floors and I get a dagger through the heart when I pass the dog food section in the supermarket. Through good times and bad he was always a constant presence in our lives; a pain the backside at times, yes, but always happy to see us, always happy just to be with us.

Now I was actively ending all of that.

We had been building up to it for some time. When we took him for a walk over Clogherhead a few months ago, I knew deep down this might have been his last time there. A last chance to snuffle under the gorse after the smell of rabbits, a last chance to sniff out what another dog had left behind, another time to let the sea breeze lift up his oversized ears like little parachutes.

I sat outside in the car and cried my eyes out. I went home and removed the dirty cushion he slept on and emptied his half-full water and food dish

Although not ancient, little-by-little his problems were catching up with him (and us); his dodgy teeth were falling out and hurting, his incontinence was an almost daily annoyance to us, his eyes weren’t the best and his unnerving, life-long tendency to attack any other dog that came near him meant that a final visit to the vet had been on the cards for a while.

He would often cry for hours at night which reminded us that a decision needed to be taken. He always sensed when something out of the ordinary was going on, if we were going away, if there was a row under way in the house and his nightly weeping seemed like he was asking for help. It was the right thing to do, but that didn’t make it any easier.

“You can ring in later to fix up the bill”, the vet said gently, “if you just want to just go that’s okay”.

As I left with his red lead, the worn-out collar he wore all of his life with us, and his muzzle that we used when out in public, the vet put her lead around him and took him away to a back room. That was it.

The enduring memory was made. I sat outside in the car and cried my eyes out. I went home and removed the dirty cushion he slept on and emptied his half-full water and food dish that he had feasted on that morning.

Through everything he never lost his appetite – he would eat a full bowl of fat off a boiled ham and still sit and stare at you as you ate your dinner until you gave him a morsel of something nice from the table.

At every turn the memories flood back; first thing in the morning when he’s not waiting for a rub behind the ears and the back door to be opened; when he’s not barking to get in as the car hits the driveway; and when his big long unwieldy tail is not wagging furiously with pleasure at seeing us when we come through the front door.

I still walk into a room and expect him to be there. We will miss him because we loved him. And because we know he loved us. Tadgh was always more than “just a dog”.

1 Minister resigns over Dominic Cummings’ Covid-19 lockdown trip
2 We are ‘sale agreed’, but can we go back with a lower offer?
3 Working from home: New costs, new stresses and little relief
4 Coronavirus: What will reopen in Ireland’s phases to ease restrictions?
5 The great unlocking: Top holiday destinations welcome back tourists
Real news has value SUBSCRIBE