When drama and therapy meet in a Co Leitrim village 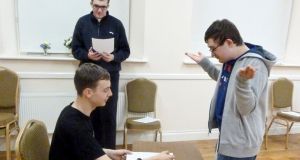 It’s a wet and miserable winter evening but upstairs in a beautifully restored 18th century schoolhouse – in the village of Carrigallen, Co Leitrim – a group of youngsters are in high spirits.

They stride around the room, upping their speed on the instructions of drama facilitator Maura Williamson. “Think about something that annoyed or upset you during the week,” she urges them, and their demeanour changes. “Have you ever seen a teacher walk into the room and you can read her body and you’re thinking, ‘what’s up with her?’”

The Bright Sparks drama workshop is in full swing. Part-funded by Creative Ireland, it’s aimed at teenagers who thrive with extra attention, 14- to 18-year-olds, coping with challenges. Williamson, who got an MA in drama therapy from NUI Maynooth in 2004, rails against any attempt to label the children, saying labels can stay with people for life and often are a tiny part of the story.

The teenage boys assume the stern tone of exasperated adults for their next exercise. “Do as I say, under my roof . . . paint inside the lines . . . you’re like a jack-in-the-box,” they recite. Its part of a script Williamson created with her young drama students. The local woman, long associated with Carrigallen’s Corn Mill Theatre Group and the Leitrim Youth Theatre Company (LYTC), has a process of collaborating on scripts with young actors, constantly inviting them to get things off their chest, to share what gets to them or what makes them happy.

“School is a big one,” she explained. “They might talk about bullying, or about relationships, about sexuality, often about not being heard.”

Williamson was in the same class in the local Drumeela national school as actor and writer Séamus O’Rourke and grew up in a community with a great tradition of amateur theatre which touched the everyday lives of ordinary people.

“Talk about method actors,” she says recalling a local farmer Peter McNamee. “He walked the roads rehearsing his lines . He was a great actor – he could have been in the Abbey. ”

One of her students, Mathew McGauran (16), is being mentored at the workshop in Bredagh Old School by Aoife Tiernan, a former LYTC student who says drama transformed her. “I was really shy. Now I can’t believe I’m able to speak in public.”

Mathew, who has Down’s Syndrome, beams with delight when prompted to think of something that made him happy during the week, perhaps the new digger at home . “Did Daddy take you out on it ?” Williamson asks and Mathew nods enthusiastically.

His mother Anne, a former psychiatric nurse from Ballinagh, Co Cavan, is delighted with the progress he is making with Bright Sparks.

“It is a great social outlet, his speech is improving and it has been a real boost to his confidence,” says Anne. In her former job, she says, she saw how a less enlightened approach to difference had an appalling impact on people’s lives. “one of her students.”

She says Mathew’s life has been enriched because of the interaction he has always had with people like his three siblings or an elderly grand-aunt who from the time he was born would “take him on her knee and sing to him all day”.

Eight teenage boys, aged from 14 to 18, have so far signed up for Bright Sparks, but the word is spreading and more have expressed interest. Philip Delamere, arts officer with Leitrim County Council, says that youth theatre “can be an incredibly powerful tool for any young person in building their self-confidence”. He says Bright Sparks has created a valuable new entry point to youth theatre in Leitrim for those who for many reasons may feel marginalised.

Maura Williamson isn’t sure why so far all the candidates are boys. “It is very interesting,” she said “I hate labels but I know some young people feel lost. I hate if a teacher says to me Johnny is ADD or ADHD. They throw labels out like smarties now. I love the unique kids, the ones who keep moving around, twitching, who are always being hushed by teachers with the fingers on the lips.”

Two of her most talented Bright Sparks – James Brennan and Shaun Wilson – have roles in an upcoming LYTC production of John B Keane’s, The Field. Williamson is co-directing with 16-year-old David Rawle from Carrigallen, who found fame in the Sky television series, Moone Boy. “David has lit a spark in all of us,” she said.

James Brennan loves Benedict Cumberbatch and will play the Bishop in The Field while Shaun will play the character Dandy. James’ father Kevin says he is “buzzing with excitement” each week after the 90-minute workshop. “The great thing about it is that he is accepted,” said Kevin, who explained that, being on the autism spectrum, James finds it hard to socialise. “Four or five years ago he was quite down about himself, but he is more quietly confident now. We have seen how the other kids in the LYTC react to James – with respect, and that does not always happen when you are on the spectrum.”

Ruth Rae says her son Ray Belverstone used to be a troubled child, but drama changed him. The bullied nine-year-old has turned into the confident 15-year-old who now watches out for and protects other vulnerable children. “I think Maura is very intuitive,” said Rae. “The children might not realise it, but I think it is more therapy than drama.”

She says her son is “bouncing around the place” after a workshop. “If I meet Maura, I say I don’t know know what was going on the other night but he got something off his chest.”

Children feel safe in an environment like Bright Sparks, according to Rae. “Maura seems to be able to get out of them what is really going on. She makes them feel that their opinion is valid, that sometimes they are within their rights to feel angry. And if they are wrong she helps them to see the other person’s view.”

When LYTC celebrated its 10th anniversary a few years back, Williamson sought feedback from former members and was taken aback when a young man told her he was gay but said the drama workshop had been the only place he felt safe as a teenager. “He said he could be himself in our workshop – he knew he was not being judged.”

She says she learns from these kids, not least from her own 18-year-old daughter Lauren, who has Down’s Syndrome. “I was on the phone one day trying to book her on to a course and I said, ‘Lauren is special needs’, and she heard and said, ‘I am not special needs, I am Lauren’. And, of course, she was absolutely right.”