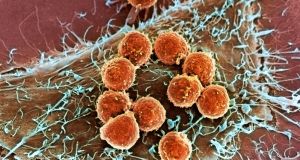 An “almost miraculous” therapy for some childhood cancers is emerging; four out of five leukaemia patients have responded positively to it in recent clinical trials. Meaning they were free of leukaemia. The therapy is called CAR-T.

Unlike a lot of the drugs, this does not involve small chemicals. Instead, patients are injected with living cells – their own cells. The first patient treat was six-year old Emily Whitehead; she had aggressive leukaemia that did not respond to chemotherapy. She was close to death when she was given the experimental treatment in Philadelphia. Emily is now 12 and still cancer-free because of CAR-T.

The therapy harnesses a patient’s own immune system. As a first step, blood is taken from a patient; the white blood cells are then grown up in a special facility. Crucially, they are genetically refitted with a gene carried in by a defanged HIV virus. This makes a protein (a chimeric antigen receptor, or CAR) that allows the immune cells (T cells) to target the cancer. These are injected back into the patient.

“T-cells are like little immune robots roaming the body looking for trouble. If they find a cell they don’t like, they attack it and call in other immune cells,” says Prof Martin Pule, CAR-T cell scientist at University College London. The problem with cancer is that the immune system is often not interested in it, since it comes from the body’s own cells.

Pule says to envisage T-cells as the hardware: “Imagine they have this computer programme within them that focuses on finding virally infected cells. The CAR-T cell strategy installs new software that makes them look for cancer instead,” he explains.

Pule grew up in Dundrum in Dublin, studied medicine in University College Dublin and trained as a clinical haematologist in the Mater hospital and St James’s Hospital in Dublin. He now heads up largest CAR-T programme in Europe, which is running nine clinical trials; in 2014 he founded a start-up CAR company, Autolus.

He says the potential for engineering an entire cell, compared with a small molecule or protein, makes CAR-T therapy “incredibly exciting”. Results so far are impressive. The commonest type of childhood leukaemia can be incredibly difficult to treat once standard treatments have failed, but a trial with a CAR-T cells in the US achieved remission in 83 per cent of 63 young patient with relapsed B cell acute lymphoblastic leukaemia (or B-ALL).

“These are children and young adults would have an awful prognosis and would be expected to die within months,” says Prof Michael O’Dwyer, leukaemia scientist at NUI Galway. “Yet their response rate was above 80 per cent with this new treatment. It is almost miraculous.”

Authorities in the US granted approval to Novartis in August for this, the first CAR-T cell therapy (Kymriah).

It is not all plain sailing. CAR-T can cause strong side effects, as the patient’s immune system goes into hyperdrive. And the complexity of CAR-T is a downside. “The whole process takes several weeks,” says O’Dwyer. “It is complicated and you must ship cells from one site to another and back, while ensuring there is no risk of contamination.” This adds to cost too (see panel below).

Another issue is variation. “It is impossible to standardise,” says O’Dwyer. “One patient may have better T cells than another.” It is essential, however, that a patient’s own cells be used, since another’s would see the patient’s cells as foreign and attack them, causing potentially lethal graft-versus-host disease.

O’Dwyer is optimistic that CAR-T can become a significant part of cancer care. Ireland should be aware of this, he says. A leader in this space – Celgene – is the only one of the top ten pharma companies with no manufacturing presence in Ireland. If CAR-T is going to be big, Ireland needs to be involved. “There is yet no evidence that we are trying to lure any of the [CAR-T] companies here to set up a manufacturing presence,” says O’Dwyer.

What we have now in CAR-T is akin to early slab-like mobile phones, rather than the iPhone 10. “These therapies are going to keep rapidly evolving to become safer and more effective,” O’Dwyer predicts. For now CAR-T therapy is expensive, but Pule believes automated technology for handling patient cells will drive down costs. It is important to consider what you are getting for your money with CAR-T cells, he adds. “This is a single infusion, but the cells hang around for years. It’s almost a permanent cancer treatment.”

CAR-T therapy could cost about half a million euro per patient. An entire package of care could end up costing €1.5 million. Is this acceptable? The National Institute for Health and Care Excellence, or NICE, in the UK found a price tag of $649,000 would be justified in young patients with leukaemia, due to the number of life years saved.

“NICE isn’t known for being particularly generous or inclined to approve very expensive therapies,” says Prof Michael O’Dwyer at NUI Galway. Novartis has set a price tag of $475,000 for its one-time treatment. Some estimate the cost to pharma for providing CAR-T could be $200,000 a go. The high price will become more contentious if the treatment moves to older patients or if the proportion cured is far lower than what looks achievable with leukaemia. Still, costs should come down as technology improves.

Big pharma views cell therapy as potentially revolutionary, evident in the $12 billion price Gilead Pharmaceuticals paid in October for a company called Kite. This is an eye-watering price for a company founded in 2009; however, Kite has market approval for a promising CAR-T therapy for patients with non-Hodgkin lymphoma (Axi-Cell) and is a leader in CAR-T know-how.

“I am sure [Gilead Pharmaceuticals] didn’t pay $12 billion for a relatively narrow indication in lymphoma,” says O’Dwyer. “I reckon they probably have some very good intellectual property.” Gilead points to CAR-T’s potential in other cancers, including solid tumours such as breast cancer.

“Liquid tumours like leukaemia will be where they have a really positive impact. Solid tumours are tougher. I’ve seen some bad results there,” says Maxim Jacobs, a market analyst at Edison.

O’Dwyer is similarly sceptical and warns that solid tumours tend to mutate more, jettisoning surface antigens that the T cells use to target them. And solid tumours are messier and harder to reach. Time will tell whether CAR-T can revolutionise the treatment of solid tumours.