‘Make the best of it, go with the flow and be open to the palliative care team’s suggestions’ 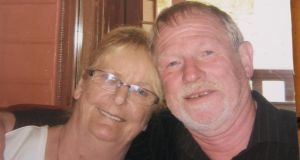 Linda O’Neill was told she’d be lucky if her father Christy would be alive for another month before he went into Our Lady’s Hospice in Dublin in a wheelchair last October, having been diagnosed with prostate and terminal bone cancer three years earlier.

“He was really bad going into the hospice, very ill, and we didn’t think he was coming out,” she recalls. “But they got his symptoms well under control in two weeks. Within a couple of days, he was walking around in good form and, after two weeks, they sent him home.”

After being discharged, he was invited to attend the hospice, in Harold’s Cross, a day a week, for the social aspect as well as a medical check up. A shy man, he was doubtful, but she persuaded him to try it and “he absolutely loved it” and went every Tuesday after that.

Christy had a few good months at home in Ballyfermot, where he lived with Linda’s only sibling, Terri, who has special needs. But he got sicker again in mid-March and the plan had been for him to go back into the hospice, “as that’s what his wishes were”, says Linda.

Ten years earlier, Christy had seen the great care his wife, Mary, had received in that hospice before dying of stomach and bowel cancer. She had been transferred there after spending about six weeks in St James’s hospital.

With her mother, when Linda first heard the term “palliative care” she “totally and utterly panicked”. She remembers ringing the palliative care team and asking that they not tell her mother who they were. Whereas in fact she was later to realise her mother was very accepting and the hospice was her choice.

It was only once the family were linked into the hospice, that Linda realised what the staff did and the help they were to them. Her mother spent four weeks there before her death at age 70.

Mary hadn’t been allowed to eat in hospital, where she was tube fed.

“The minute we got to the hospice they said she can eat. It’s those little things. I can remember we brought her down to the canteen and said ‘what do you want Mam, you’re allowed to eat’. And she was ‘I’ll have a fried egg and chips’!”

“Like a home from home – you have your own room and we could go in and out at any time of the day or night.”

Mary could get her hair done, her nails done; there were music sessions and massages available.

“We savoured every minute. Not only myself but her own family, her sisters and brothers. We spent lots of time in the Rose Garden, drinking tea, laughing – it was amazing because she was so sick previous to that. They gave her a boost – it is so uplifting.”

Christy had a great allegiance to the hospice from then on, doing fund-raising and, when his time came, “he wasn’t scared”, says Linda.

However, because that time came at the start of the Covid-19 lockdown, they decided to keep him at home in Ballyfermot, with members of the hospice’s palliative care team calling to the house.

“They told us every step of the way what was happening,” says Linda, who could also ring them at any time of the day or night. “They take everything out of your hands and make the journey very easy for you.”

Christy died in his sleep on April 15th, at the age of 77. End of life is always a sad time, but palliative care makes it easier, says Linda. Having been through it twice with her parents, what’s her advice to other families in that situation?

“Make the best of it, go with the flow and be open to the palliative care team’s suggestions. Let them guide you. Don’t be fearful – palliative care doesn’t mean this is the end, it means the help is there.

“It means you the family have the time to do what you want,” she adds, “to spend the time with the people you love.”

Read: ‘It’s like a comfort blanket knowing they are there all the time’