JK Rowling says her ex-husband hit her. Why are people trying to silence her?

I stayed silent when I witnessed domestic violence. But we all need to speak out now 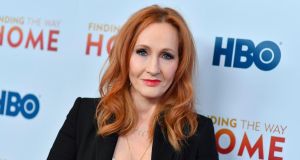 A few years ago a male friend and his girlfriend came to stay in my home. She was not an easy guest, but I tolerated her company, more for my friend’s sake than anything.

One evening, after a few drinks all round, what had started as a harmless debate about something daft soon escalated into a stand-up row. It spiralled out of control dizzyingly quickly. Soon my friend’s girlfriend was shoving, screeching, lobbing personal insults at me. A neighbour banged on the wall. I looked over at my friend: “Are you going to do something here?”

Unfortunately, he did. Pulling her by the hair, he wordlessly dragged her back into a bedroom while she kicked and punched him. He recoiled on the bed as she landed blows on him. At an absolute loss on what to make of it, I retreated to my room. We never spoke of it again.

For years I thought of marital abuse largely in terms of a woman, terrified and cowering, with a man looming over her, malevolent and bone evil. Domestic abuse happens on a much wider spectrum, for men and women, than just that

But, for me, the shame lingered: at my inability to do nothing, at the possibility that I might have caused it, at the fact that I didn’t know how to process it fully. I had to reappraise my feelings for a man I’d previously felt close to.

For years I thought of marital abuse largely with one enduring optic: that of a woman, terrified and cowering, with a man looming over her, malevolent and bone evil. A woman stoically nursing her wounds, a soothing chorus of empty apologies wafting around her. This certainly happens, but we need to realise that domestic abuse happens on a much wider spectrum, for men and women, than just that.

The awful memory resurfaced this week when JK Rowling wrote about being a victim of domestic violence in her first marriage.

Asked to comment on the allegations, Rowling’s ex-husband, Jorge Arantes, brought the already grim story to a new low with this shocking statement: “I slapped Joanne – but there was not sustained abuse. I’m not sorry for slapping her.”

The Sun has been widely criticisied for publishing these words in a front-page headline, with many stating that the newspaper had offered an abuser a platform for repellent views. The Sun has defended the article, saying that it had intened not “to enable or glorify domestic abuse” but to “expose a perpetrator’s total lack of remorse”.

Arantes comes across as an unrepentant lowlife with his only-a-slap crud, but it speaks to the way perpetrators justify their terrible actions to themselves and others.

After a week in which Rowling has doubled down on her comments about transgender women, Twitter was stuffed to the seams with people posting about how much they want to “bitch slap” the author. I’m no fan of Rowling’s views, but I can’t help wondering what it must have been like for her to read not just Arantes’s comments but a sustained barrage of these tweets. It made me think of what I saw a few years ago on that awful night. No matter their perceived shortcomings, no one deserves this.

I initially worried about writing about domestic violence. After all, I’m neither a survivor nor a perpetrator. Why am I taking up space having this discussion, when the lived experience of others needs to be heard? But that’s the point. Domestic violence isn’t just the preserve of the victim and perpetrator. It should involve all of us. That we think of it as a private, personal thing lets us, the bystanders, off the hook.

Just as we have striven to clear up the perceived grey area around sex and consent, we now need to do the same with physical violence, and from an early age

In the wake of the Covid-19 lockdown, reports of domestic violence rose by 30 per cent in some areas. With a noxious brew of financial pressure, booze and family tensions in close quarters, it’s probably no wonder. But what of the instances of domestic violence that don’t readily “look” like domestic violence? A slap, like the one Arantes allegedly dispensed, that doesn’t count in his mind as abuse?

Domestic violence remains one of the most unknowable and misunderstood crimes in Irish society, shrouded in secrecy and, often on the part of the survivor, a misplaced sense of shame.

The greatest difficulty around domestic abuse is precisely that it remains hidden, in a complicity of silence. There’s hidden bruising, and emotional terrorism. Family members, out of misguided loyalty, confusion or even shame, protect the perpetrator. There’s a psychological complexity involved that remains a mystery to wider society.

Just as we have striven to clear up the perceived grey area around sex and consent, we now need to do the same with physical violence, and from an early age. Just as “no” means “no” in a sexual encounter, a slap isn’t “just” a slap, whatever the context and whoever the person giving it.

Since 1996 more than 230 women have been killed in Ireland, mostly at the hands of a partner or ex-partner. I shudder to think what psychological torment or uncertainty some of the women endured before their deaths. Maybe it’s time, as individuals, that we try to start understanding the real experiences of these victims and their children a little more. We think of it as a grey area and, if we are lucky enough not to be directly affected, as a problem for others. Really, it shouldn’t be.

How to have a happy Halloween, Christmas and St Valentine’s this winter
5