For older people, emerging from the cocoon is fraught with risk

Risk of muscle wasting, falls and anxiety for many older people cooped up in lockdown 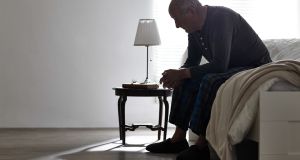 ‘The biggest risk is that of some over-75s becoming so dependent on the safety of their own homes that emerging to reintegrate with society becomes more difficult.’ Photograph: iStock

As the rules around Covid-19 cocooning have eased, the route back to a semblance of normality hasn’t been a straight one.

Among some older people, in particular, I have noticed a slowness to engage with their surroundings. Many of those aged over 75 appear to be more frail; whether from the direct physical consequences of isolation or a loss of psychological confidence, relatives are noticing a marked loss of independence for some.

The physical consequences of cocooning may be obvious. There is a clear risk of muscle wasting from lack of real exercise, along with concerns about bone health due to lack of Vitamin D from being confined indoors. While it is too early to tell, these physical consequences are likely to increase the risks of falls and fractures.

Then there is the likelihood that some older people may not have come forward with suspicious symptoms of heart disease, minor strokes or possible cancers, due to a fear of encountering Covid-19 in hospitals.

According to Alone chief executive Seán Moynihan, the helpline has experienced an uptick in calls about physical injuries related to falls.

“While we welcomed the news that cocooning measures would be relaxed slightly and that older people would be able to leave their homes to exercise, we are encouraging older people to take extra care when out walking to reduce the risk of a trip or a fall. Last week we saw an increase in the number of calls from people telling us they have fallen recently, or are afraid to go outside their homes for fear of falling.”

The organisation has also noticed an increase in calls relating to social isolation and loneliness. We know from research by The Irish Longitudinal Study on Ageing (TILDA) that loneliness has a negative impact on mental and physical health. Amid an increase in calls about suicidal ideation (from 2-3 calls a week to 3-4 calls per day) Alone has renewed its call for a national strategy on loneliness in order to tackle the issue.

“While many senior citizens over 70 have been extremely resilient and compliant in relation to the request to cocoon during this crisis, is there going to be some long-term consequences emotionally for a significant proportion of this group?”

His latest book, Emotional Healing: How to Put Yourself Back Together Again (Orion Books) is likely to be a helpful guide for those suffering from the emotional sequelae of cocooning.

Barry fears the emotional toll will be high.

“The biggest risk is that of some over-75s becoming institutionalised, becoming so dependent on the safety of their own homes that emerging to reintegrate with society becomes more difficult. Then there are the obvious risks of increasing levels of anxiety, with an understandable fear of becoming infected with this virus and ending up in hospital or on a ventilator.”

He even wonders if we might induce such a level of fear that some develop a specific coronaphobia.

“Have we achieved our objective of trying to protect those we love so much, but failed to really grasp the hidden damage that such actions may unfortunately create for some?” he asks.

It’s an important question for all of us – politicians, health professionals and the public – to reflect on as we ready ourselves for the next pandemic wave.

‘The quarantine 15’: Don’t be ashamed of those extra pounds
8