It is three months since I took the last anti-depressant 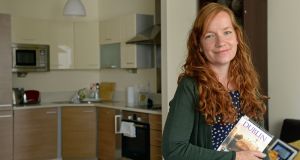 “Jimmy from up the road was taking 40 tablets a day and he just stopped taking them and he’s fit as a fiddle!”

“Yep. Mad into the wheatgrass now.”

We’ve all heard that conversation. Like Jimmy, I’ve been taking tablets for years. In 2014, I wrote an article for The Irish Times about being diagnosed with depression and anxiety and reluctantly taking my first anti-depressant.

I was living in Tanzania at the time and the doctor there told me I could just take it for six months and start coming off when the weather was good and when there was no major change in my life.

At the six-month mark, I was feeling better, but I was moving to Ireland.

After a year, it was winter.

Then we moved house. Then I moved jobs. The time was never right, yet it played on my mind.

Having moved, I got a new doctor, and gave her my medical history. “Why are you taking these anti-depressants?” she asked. “Medication is not the answer.”

She had bright pink lipstick on her teeth and the waiting room smelled of spilled milk. Who is she to say that to me? It didn’t seem helpful. I was only there about a chest infection.

Not long after that, I had a wobble. A different doctor gave me different tablets and I walked into walls. I knew I needed some other type of help, but I resisted counselling because of the cost. The first counsellor was of pink-lipstick-on-the-teeth ilk. I was galled to pay her the €90 for an insipid 50 minutes in an attic room in her house.

I tried a different counsellor. He didn’t ask me for €90. He asked me how much I could afford and he was worth 100 times that. He was so bloody practical. Right, what’s the problem? Let’s have a go at fixing it.

I went to him for a couple of months and felt much better. My job changed, my house changed, the weather changed, and another two years have passed without this ideal window to stop taking the medication.

Sometimes, in conversation with friends or family, I tell them that I would like to stop taking the tablets. It is divisive. Why would you want to? I suppose when it comes down to it, I feel like I have been taking painkillers for a headache I had three years ago and I don’t know whether it is still there. I back it up with quotes from doctors and counsellors who say that medication is not the answer.

They shake their heads. It is still there, they insist. A psychiatric nurse I know tells me that doctors telling patients that medication is not the answer is a massive problem in the world of mental health.

In May of 2017 I talked to my new non lipstick-wearing doctor. After a robust discussion she said: “Wouldn’t it be great to not take any tablets?”

It was summer, I was settled at home and at work. Here was my window, and she helped me to wean off them. I didn’t want to tell anyone because I didn’t want their opinions. I felt a bit agitated and I was getting weird zappy feelings in my head, like small static shocks. I was doing okay, I thought, when something happened that put me out of my comfort zone and my “no big changes” window slammed shut.

Would I take the tablets again? Yes, if I needed to

What was a slow, steady drive down a narrow mountain road was now skidding in a mudslide and the brakes were gone. I was crying. My hands were tingling. Oh God, my hands are tingling – it’s back. And that made me cry more. The deep, shaking sobbing that I hadn’t done in three years. I spiralled and landed back in my doctor’s office. “Does this mean the depression is back? Should I just start taking the tablets again?”

She thought not. What had happened was a genuinely difficult situation, and I didn’t have the buffer that medication had given me. This, coupled with withdrawals (which could last up to eight weeks after stopping medication), could be the cause of the horrible feelings.

We decided that I’d keep going for another little while and revisit the situation. I booked a session with my very practical counsellor and, after much consideration, I told my boss what was going on and he was incredibly supportive.

Nonetheless, it was rotten. It was vomiting bug for the brain with no sign of easing up. Buzzing, crying, tingling, twitching. A cup of coffee was teeth-chattering. A glass of wine was a black hole. I was dragged downwards and I didn’t have the energy to fight it. I wanted to take my brain out and wash it with bleach. Was this worth not taking the tablets for?

I tried to do everything by the book. Counselling, eating well, exercising, meditating. Keep the ship steady.

“Am I ever going to feel better?” I asked my counsellor, trembling with anxiety in the tub chair. He said I would and I believed him. Counselling, eating well, exercising, meditating. Keep the ship steady.

He was right – it did get better. It’s six months since I started weaning myself off and three months since I swallowed the last tablet. Each night before I get into bed there is that split second where I look for the tablets, and it’s not as liberating as I thought it would be.

But I’m happy that – for now – I can be without them. I’m laughing really hard. I had a big cry (over two chickens – that’s another story) and actually, it feels good to be able to cry, and stop crying. I’m snappier than I’d like to be but I can work on that.

Would I take the tablets again? Yes, if I needed to.

Pinch of Nom: Are these women in the best shape to launch a best-selling diet book? Yes, actually