I’m hobbling like an auld fella, and I only have myself to blame

Don’t go for a long-distance run in Converse, even if your runners have been stolen 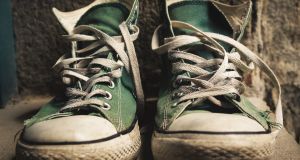 I make the wrong choice. I run in my Converse 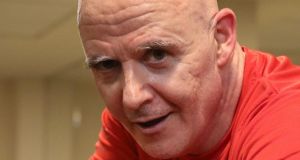 Conor Pope is put through his paces in the Health Club at the Shelbourne by David Smith. Photograph: Crispin Rodwell

Oh deer, I say hilariously to myself as I run a Phoenix Park route I am very familiar with. It is days after Christmas and I have just disturbed a herd of the most seasonal of animals during their mid-morning munch with my heavy hooved gallop.

I have chosen this route because it is the one used by my children’s school for its summer fun run so I know the circuit is roughly 3km.

I figure if I can do two laps of the field I will have taken a big leap towards my 10km goal. It is also easier to determine real-time progress when running a well-trodden and easily measurable circuit. If two laps are 6km and each of the two squares has four sides, that means each side is 750m.

I am delighted by mental arithmetic and find it easy to dismiss the fact that it is fourth class maths. Lap one is simple and the first two sides of lap two’s square are grand, but I flag troublingly over the last two sides of my square and I am delighted when it ends that instead of running to the park as I had considered doing, I drove.

I go home delighted with myself and start eating Christmas leftovers and handfuls of chocolate.

Despite the binge-eating, I am well on the road, I tell myself.

I go to a gym which is new to me for work purposes and somehow manage to leave my trainers, my top, my shorts and my towel behind me on a bench in the locker room once I am done with my spinning.

“What? Did you just take off all your clothes and walk out of there naked?” my wife asks in amazement when I tell her that I have forgotten everything.

No, obviously. I changed into my normal clothes. Put my gym clothes in a neat pile and then walked out of the gym with an empty gym bag on my back. And no, I did not twig that it weighed almost nothing.

I ring the gym almost immediately but it is too late. It is closed for some class of festive break which means I can’t even find out if they have found my clothes and are keeping them safe for me.

Sadly, I am not the kind of person to own two pairs of trainers which means I have two choices. I can knock my running plans on the head for days until I can make it to the gym, or to a shop to buy new runners, or I can go for a run in my Converse.

I make the wrong choice. I run in my Converse. I pound hard pavements in my neighbourhood in runners that most certainly were not designed for such a purpose. I cover 3km handily enough, but the absence of any kind of shock absorption in the soles of the shoes means I feel every step in my bones.

Hours later I feel it in my knees.

All of a sudden, I am hobbling like an auld fella.

There is worse news in the days ahead. I eventually get through to the gym, one I have only visited once and one I will never, ever visit again. There is no sign of my clothes. The person at the end of the line tells me that someone probably stole them.

I can’t believe that someone would actually want my sweaty clothes and a pair of trainers that are more than three years old. I also can’t believe that if I am to continue with my running I will have to brave the Dublin sales to try and find a replacement pair.

And I can’t believe I have no one to blame but myself.