Intermittent fasting can have benefits if you are obese or overweight 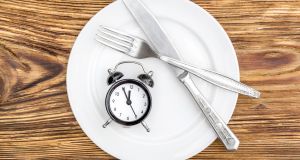 Intermittent fasting diets: Skipping breakfast and morning snacks and eating between 12pm and 8pm seems to be a popular choice. Photograph: iStock

Have you enjoyed the festivities so far? Hopefully, a soupçon of hedonism hasn’t gone amiss, with more to come on New Year’s Eve.

But New Year’s Day remains synonymous with the making of resolutions, especially health ones, so I thought this week’s column might look at some novel ideas on achieving a healthy lifestyle.

Health resolutions mostly involve exercise or diet. Yes, drinkers and smokers may naturally focus on these habits, but almost everyone considers eating less or differently at some point in their lives.

One of the latest dietary “angles” involves intermittent fasting: diets that either restrict food intake to certain hours of the day or limit intake several days each week. Alternate day fasting and the 5:2 diet (eating normally five days a week, with a much restricted calorie intake on the other two days) are well established and have an evidence base. But the one that caught my eye recently is time-restricted feeding.

According to an article published last autumn on medium.com, the ancient Romans were obsessed with digestion and were somewhat repulsed by breakfast. While it seems well removed from the usual caricature of gluttonous feeding in those times, historians confirm that the Romans were not in favour of more than one meal a day.

They may have been the first to promote a time-restricted diet involving the compression of eating – including all meals and snacks – into a six to eight hour daily window. It makes sense from an evolutionary perspective: we’re not designed for constant chewing and grazing.

Krista Varady, an associate professor of nutrition at the University of Illinois at Chicago said that in the short term people who time restrict their intake but don’t change the type of food they eat, still lose weight. She co-authored a 2018 study that found obese men who ate only between 10am and 6pm lost an average of 3 per cent of their body weight after three months. And their blood pressure readings also improved.

Apart from its novelty, what makes time-restricted eating particularly enticing is that it doesn’t focus on the content of our meals.

The obvious attraction of intermittent fasting is that it takes us away from the (in my experience) soul-destroying counting of calories and the intense focus on cutting carbs or fat. Weightwatchers undoubtedly works for some people; frankly I found it depressing.

Apart from its novelty, what makes time-restricted eating particularly enticing is that it doesn’t focus on the content of our meals. I reckon people will find it easier to develop a habit around picking an eating window that suits. Skipping breakfast and morning snacks and then eating between 12pm and 8pm seems to be a popular choice. And from the new year resolution point of view, it sounds like a diet that will continue beyond the first few weeks of January, thus avoiding the “fear of failure” emotion many of us experience at this time of year.

Is there any evidence that intermittent fasting diets benefit people who are healthy? There’s not enough to support their use on healthy adults – yet. Although certain groups who practice intermittent fasting for religious reasons experience health benefits, such groups tend to lead notably healthy lifestyles anyway, meaning long-term research will be needed to overcome any bias.

But if you are overweight or obese what isn’t in doubt is the promise shown by intermittent fasting diets. Subject to your doctor’s individual advice, it’s where I would focus my efforts if a new diet is part of your resolution-making in the next few days.

Finally, I would like to thank readers for following my column over the last 20 years. It’s been an absolute pleasure writing and interacting with you since January 2000. Please continue to email and write!

With sincere wishes for a healthy and happy new year.