Health Hints for the Home: ‘Immunisation is the answer to the menace of diphtheria’

In the first of a new series, we look at the eight guidelines sent to Irish households in the 1950s. This week: diphtheria 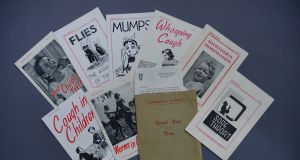 The eight pamphlets circulated to houses countrywide by the Department of Health in the mid-1950s.

These “Health Hints for the Home” offer an insight into the chief public health concerns – and contemporary medical advice – of that decade.

Though some of the advice is now obsolete – even dangerous – some remains relevant today.

The first leaflet was a plea to parents to immunise their children against diphtheria. This serious – sometimes fatal – bacterial infection, which affects the mucous membranes of the nose and throat, was being eradicated by a vaccination programme.

Here is what was included in the first pamphlet.

Diphtheria is one of the most serious and damaging of the acute infectious diseases which occur in this country. In the 10 years from 1936 to 1945, over 30,000 persons in this small country caught diphtheria, and more than 2,600 of them died. Just think of those numbers – not as numbers, but as children. Think of what it means – 60 new cases of diphtheria every week, with an average of five deaths every week. Diphtheria was certainly a disease worth fighting in those days – and 1945 is not so long ago. What is the position today? A very different story. Instead of 3,000 cases in the year, there were, in 1952, only 28 cases of diphtheria. And instead of five deaths each week, there were only seven deaths in the entire year from this disease. That is a remarkable improvement, and there is not doubt that the main reason for this improvement is diphtheria immunisation.

Immunisation against diphtheria gives almost complete protection against the disease. If all our children throughout the country were given this protection, diphtheria would soon be a very rare disease. There can be no doubt that immunisation is the answer to the menace of diphtheria . . . And that is why parents everywhere are urged to have their children immunised.

Unfortunately, there are still many parents in this country who do not seem to realise the great danger of diphtheria, and who do not appreciate the great protection given by immunisation. To protect all the children in the country would mean having about 60,000 young children immunised each year. In fact, only about half this number are receiving the protection. The others are being left to take a chance, to run a risk which is quite unnecessary. Perhaps the parents of these children think that immunisation is no longer necessary, or that it is too much trouble, or perhaps they don’t like the idea of their children having injections. Perhaps they mean to have it done – sometime – but they’re just careless, and keep on putting it off. Those parents, and their children, might just as well be back in the bad old days when there was no protection to be had – the bad old days of diphtheria epidemics and crowded fever hospitals, and schools closing down because of an outbreak of the dreaded disease. Those days could easily come back again. Every child left without the protection of immunisation increases the risk of an epidemic.

Immunisation against diphtheria is easy, it is safe, it can be had for your family free of all charge, and it works. If your children are still without this protection, don’t delay any longer. See that they get it now.