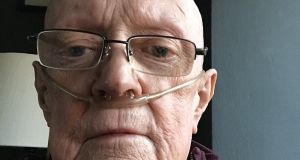 Paddy Murray: “When see so many people who clearly don’t believe there is any pandemic or, if they do, don’t give a damn, it scares me.”

It is 22 years since I was told I was suffering from Lymphoma.

I had, for years, put up with red blotches on my skin, assuming – as my then doctor did – that it was psoriasis.

But then I gave up playing Taverners’ Cricket (badly) because I could no longer stand my own embarrassment when others stared at my blotches in the dressing room. The friend who introduced me to that game urged me not to give up. And he advised me to see a different dermatologist.

I’m pretty sure she diagnosed me on my first visit. A biopsy confirmed what I’m sure she thought when she saw me, but didn’t say.

She was blunt about it on my second visit.

“You have Cutaneous T-Cell Lymphoma,” she said. “Cancer of the blood. How do you feel?”

I surprised myself, because I didn’t actually feel sorry for myself and I didn’t feel frightened. Indeed, in a moment inspired by what, I don’t know, I told her that I was lucky.

“There will be a man on a bus passing this clinic today and he’ll be dead within a week. He doesn’t know there’s anything wrong with him. I’m lucky, because I do.”

A bit on the profound side for me! But it was how I felt.

And so began years of treatment. Ultra violet light. Various drugs. Trips to Belfast for a treatment called photopheresis – which involves your blood being taken from your arm, zapped with ultra violet light and put back all in one session – more drugs, trial drugs, full body electron beam treatment, also in Belfast, and then more drugs.

Then a nasty tumour on my foot landed me in hospital for weeks and it was after that setback, I think, that the prospect of a bone marrow transplant was mentioned for the first time.

And so that came to pass 12 years ago.

Chemotherapy first – and that’s never pleasant. And then weeks of recovery in isolation due to the fact that the transplant leaves you temporarily without an immune system and permanently with a compromised immune system.

All was good until my breathing started giving me trouble.And COPD was diagnosed. This was, of course, more due to years of smoking – I had given them up a good few years before the transplant – than anything else.

So now that’s at Stage Four and as I think I said before here, that wouldn’t be so bad if there was a Stage Five. But there isn’t.

And here’s the thing.

I have been stoical about my health right from that day 22 years ago. I have been pragmatic. I have dealt with it. A lot of optimism, a whole lot of whingeing, music – live when possible – and a bit of prayer. That’s what got me through.

But now, that’s not enough.

Now I am frightened.

I have never been frightened like this despite all the years of illness.

But when I drive into a shopping centre car park to let my long-suffering wife buy our groceries, and see so many people who clearly don’t believe there is any pandemic or, if they do, don’t give a damn, it scares me.

When I walk outdoors a little with an oxygen machine over my shoulder – which I am sure is embarrassing for both my wife and teenage daughter – there are those who will barge past me, maskless, despite my overt signs of respiratory illness.

I see them maskless going in and out of shops. I see them as buses pass.

I hear eejits like Van Morrison and Noel Gallagher talk about their civil liberties being infringed by a government asking them or telling them to wear a mask. They are beyond stupid.

And if I had to choose, I’d rather fly on an airline run by Michael O’Leary than one run by Dr Ronan Glynn. But when it comes to advice in relation to Covid-19 it is decidedly, the other way around..

There is no government on the planet that deliberately annoys the electorate.

If it could, the Government would not only remove all the restrictions in place right now but it would hand out jelly and ice cream to every child in the country, allow expenditure on wine to be tax deductible and give every woman in the land a clothing allowance every year.

They don’t do unpopular things for fun. They see themselves as having two jobs: one is running the country as best they can and the other is getting re-elected.

So if a government starts doing unpopular things, you can be pretty sure it’s because it has to not because it wants to.

I have managed 22 years of chronic illness without waking up scared and going to sleep worried. That’s all changed.