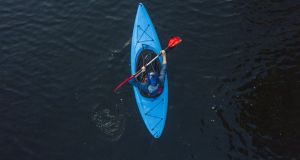 River kayaking in Dublin: Brita Waters’s death brings to seven the number of kayaking fatalities in Ireland in the past five years, according to Irish Water Safety. File photograph: Getty

To kayakers, Brita Waters was a highly experienced paddler with a winning smile. But, within and beyond the sport, the 36-year-old had touched many lives before she lost her own on a Kerry river last weekend.

The Marine Casualty Investigation Board (MCIB) and An Garda Síochána have initiated separate inquiries into the incident. There is no suggestion, however, that this was anything other than a very unfortunate accident. The incident occurred when Waters was navigating the Roughty, a 30km river running via Kilgarvan, Co Kerry, into Kenmare Bay, as part of a group from the Lir canoe club.

Lir organises weekly river trips on the Liffey, in Wicklow and the Boyne, Co Meath, and is affiliated to Canoeing Ireland, the national governing body for the sport.

The group of five had set off last Sunday morning, and it is understood Waters was separated from her four fellow paddlers when she became trapped under a tree in a fast-flowing section of the river that runs through a gorge. The alarm was raised after the four retraced their route, found her and made every effort to save her in very challenging conditions.

The cascading Roughty is an important salmon and sea-trout river, while also a magnet for white-water paddlers. Back in 2003, it was the focus of a protest by both canoeists and anglers who successfully opposed a hydro-electric scheme planned on a stretch of the waterway marked by waterfalls and rapids.

“It is a very well known ‘go-to’ river in Kerry for kayakers,” says Jon Mackey, development officer with the sport’s national governing body, Canoeing Ireland. He and his colleagues have extended sympathy to Waters’s partner, Martin, and family, while the Lir canoe club has said it is “devastated by the sudden and tragic loss of Brita Waters, one of our brightest and best members”.

Waters, who lived in Douglas, Cork, but had family connections with Baldoyle in Dublin and Dungarvan, Co Waterford, took up kayaking some years ago. She was a “familiar face around Canoeing Ireland’s training centre”, Mackey says, and was on her club’s committee.

Such was her experience that she would have provided safety cover for competitors in the Liffey Descent, one of the highlights of the Irish kayaking year.

Waters was a graduate of Trinity College Dublin, where she took social studies, and University of Roehampton in London. She spent 11 years with Tusla, the child and family agency, working with children and adolescents in foster and residential care.

She had volunteered abroad and at home with Alone, the charity for vulnerable older people, and with Make-A-Wish, which organises events for children and teenagers with life-threatening medical conditions

“Brita was the kindest, most giving and special person,” a tribute page raising funds for the charity in her memory this week states. “She touched the lives of so many people, and truly made a difference.”

Her death brings to seven the number of kayaking fatalities in Ireland over the past five years, according to Irish Water Safety figures. Three of these incidents occurred last year alone.

Irish Water Safety chief executive John Leech says the organisation is concerned about the number of kayaking incidents, given the strong safety culture within the sport generally.

There are about 3,800 members in clubs affiliated to Canoeing Ireland and the prevailing culture over many years has always been one of “less than three never be” on rivers, waterways and off the coast.

“Obviously, anyone can buy a canoe and paddle and go out on the canal and the only legislation is around wearing lifejackets and having a licence for a VHF radio if at sea,” Mackey says. “So you could have up to 10,000 people in boats over the summer, but we encourage everyone to join a club.”

Club members are encouraged to take courses at several levels, with trained instructors who “guide people through the various skill levels to ensure their involvement is structured around safety”, Mackey adds. Membership also offers insurance cover and access to “best practice guidelines” and community resources.

Public awareness campaigns have contributed to a reduced incidence of drowning generally, Leech says, with Ireland’s rate far more favourable than that of Nordic countries where numbers have quadrupled.

Ten swimmers died here so far this year, with several incidents during the prolonged hot weather. Sea and inshore angling, diving, sailing and walking near waterfronts still account for a higher number of recreational fatalities than kayaking.

Surfing, in some of the most challenging Atlantic conditions, holds the record for one of the safest water adventure sports in Ireland, with no fatalities since Leech took up his post.

This is focaccia, but not just any focaccia
Real news has value SUBSCRIBE