‘There is an awful lot of “Mum guilt” towards the toddler’ 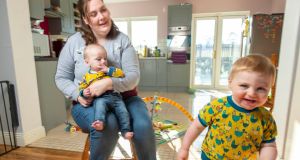 The transition from one child to two was much more difficult than Sandra and Ross Towning had anticipated.

They had been lulled into a false sense of security by their first-born Ryan, who has just turned two. He was “that mythical baby who slept all night”, says Sandra, “and ate whatever was put in front of him. It was just so simple.”

Then Aaran came along almost five months ago. “And Aaran hasn’t slept since Aaran was born,” she explains with a laugh.

Of course, she also has “a hyperactive toddler who wants attention all the time and can’t understand that mummy has to sit down and feed the baby”.

Ross, who she describes as a very “hands-on” father, had taken no annual leave from work after he heard they were expecting a second child, so he was able to take a month off altogether when Aaran was born. At this stage, he has a better relationship with Ryan than with Aaran, explains Sandra, because for the first two or three months the baby just wanted his mother. This meant the time Ross was off work, he spent mostly with Ryan.

“It was great for Ryan – and being in the middle of the summer and the good weather, they could go off and do things.”

It was a bit daunting for Sandra to be left alone with the two of them when Ross returned to work. “When you’re breastfeeding, it takes so much time, you are sat under your baby. And there is an awful lot of ‘Mum guilt’ towards the toddler. You can’t sit and play with them; he’s there trying to jump on you and he doesn’t understand.”

She wasn’t prepared for that guilt but life is getting a bit easier and she is able to do more with Ryan now. “But when you are going through it, you feel really, really bad for him.”

However, Ryan loves his baby brother so it seems there are no bad feelings on his part. “He is very, very attached to him.”

He was only 20 months when Aaran arrived and his parents didn’t think there was much they could do to prepare him, that if they read him books on the subject, he was too young to understand.

“Basically, we just had to introduce them – and luckily they hit it off. We had no jealously or anything like that. I think Ryan is just a very placid, happy child – he wasn’t clingy at all, whereas Aaran would be. They are complete, polar opposites.”

However, Sandra says there are times when Ryan can’t understand why she can’t get him a cup of juice right this minute – then a tantrum ensues.

“We’re working on it. He’ll start crying, he’ll set the baby off and then you have two children crying at the same time as you’re trying to rush out the door.”

Living in north Co Cork, about halfway between Mallow and Mitchelstown, they don’t have family nearby: Sandra’s parents are in Tipperary and Ross is from Scotland. But she has done exactly what parenting expert Val Mullally recommends: “Establish your support base because the task of parenting is too big to do alone.”

Sandra joined the Cork North branch of the parent-support network Cuidiú (cuidiu.ie) and it meets every Thursday. She is also a member of a parent-and-toddler group in their village of Shanballymore that gets together every Friday.

Both of them “are an absolute life-saver”, she says, with a lot of the same mothers going to the two groups.

“It’s great. You can sit down, feed baby and Ryan can toddle around and play with his friends and there are people there to keep an eye on him. And if you’ve had a bad night, there is somebody there to give you a cup of coffee.”

On social media, everybody has pictures of nice, smiley, happy families, she points out, but “the reality is far from that and when you go to these groups you realise everybody is in the same boat as you”.

Sandra tries to be that calm parent we all aspire to “but I have my moments”, she admits. “Sometimes I just feel I am flying by the seat of my pants.”

Aaran is coming out of his shell now, will go to strangers and she is hoping he will settle into some sort of routine before too long. Ryan got into his own routine early on and has stuck to it since – going to bed at 7pm and waking at 8am.

“He loves his sleep,” Sandra says, adding laughingly that “it’s karma” now they have a totally different baby this time round.