‘I didn’t cry, but my parents were upset. I think I was probably in denial’

Laura Dunne is just 22 but has been through surgery for bowel cancer. Early detection is key 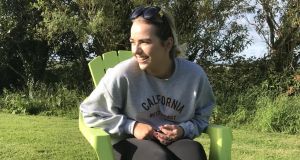 Laura Dunne: “I put off going to the doctor for months because I was embarrassed to talk about my bowels or to tell my friends and family that I was in pain.”

Most of the almost 2,800 people in Ireland who are diagnosed with bowel cancer every year are over 50. But it affects younger people, too, as Laura Dunne knows only too well.

At just 22, she has been through diagnosis and surgery to remove cancerous cells from her bowel and says that everyone, no matter how old they are, should be aware of the signs and not be reluctant to go to the doctor.

“When I first started having symptoms, in October 2018, I was 21 and living in Limerick, as I was in college,” she says. “It started with me passing some blood and having pain going to the bathroom, but I just assumed that it was a haemorrhoid or something like that, so I ignored it.

After an X-ray, I was told that I was just constipated and sent home. But I have a family member who had bowel cancer in the past, and my mam asked the doctor if I should be concerned about that

“Also, I was only working part-time, and, being in college, I felt I had lots of better things I could spend the €50 doctor’s fee on. But the symptoms continued and got really bad, so by March 2019, when I was in the middle of my exams, I went to the doctor for another issue and casually mentioned the symptoms I had been having.”

The Clare woman says her doctor “wasn’t concerned” and, upon examination, couldn’t see anything wrong, so prescribed medication and said to come back if things didn’t improve.

“The medication didn’t help, so I went back to the doctor, who said it was probably a haemorrhoid, which would need to be zapped during a colonoscopy, a procedure I had never heard of,” she says. “The doctor made the referral, and also sent me down to Limerick hospital to be checked, as she thought I could have an obstruction.

“After an X-ray, I was told that I was just constipated and sent home. But I have a family member who had bowel cancer in the past, and my mam asked the doctor if I should be concerned about that, but they said no, I was too young and they were convinced that it was a haemorrhoid or a tear which was too far up for them to see.”

Laura had a colonoscopy in April 2019, and as she was the youngest person on the ward no one expected that anything sinister would be found. “I remember the nurses telling me how unusual it was to have someone my age there,” she says. “It wasn’t a full colonoscopy, so I was awake for the procedure, and while it was uncomfortable, the nurses and doctor were really nice. I was facing the screen, and I remember seeing them remove a little growth which looked like a mushroom.

“Then, after the procedure, the doctor told me that they had removed a small polyp and it was being sent to the lab, which was standard procedure. I didn’t know what a polyp was at the time, and I remember my mam asked was it anything to worry about, and he said ‘Look around: you’re the youngest person here. It’s nothing to worry about.’

“So I forgot about it – I had my niece’s christening the next day and college exams the following week, so it really was at the back of my mind. And when I received an appointment to return to the clinic three weeks later, my doctor said this was normal. But then I got a call asking if I could come in before that, as my results were in. I didn’t cop it at all, and my biggest worry was that I was supposed to be in work at 10am.”

It was a bit of a blur, and I definitely didn’t take in what the doctor said. I didn’t really understand, and told people that, although they had found cancerous cells, it wasn’t serious

Laura’s sister drove to the hospital, and her parents said they would meet her there, as, despite her daughter’s assurance that everything was fine, her mother thought otherwise.

“My mam knew there and then something was wrong, as she has had too much experience with cancer herself,” she says. “Her brother passed away nine years ago, at 42, my nana passed away three years ago, at 71, and my grandad died 15 years ago, aged 62 – all died from cancer, so she knows the language.

“It honestly wasn’t worrying me one bit, but Mam was so adamant that I had to go that day, and when I got to the hospital I checked into the endoscopy unit and had barely sat down when my name was called. We were brought into an office, and the doctor asked if there was a history of bowel cancer in the family. He then went on to say that there were cancerous cells found in the polyp, and I was being transferred to the care of another doctor. He said I would probably need surgery, but the first step was to get scans done to make sure it hadn’t spread anywhere else.

“It was a bit of a blur, and I definitely didn’t take in what he said. I didn’t really understand, and told people that, although they had found cancerous cells, it wasn’t serious. I didn’t cry, but my parents were upset, and, looking back on it now, I think I was probably in denial.”

Over the following few weeks Laura had more tests and examinations, which revealed that, thankfully, the cancer was contained. She went on to have surgery, which included the temporary installation of a stoma, before she was finally discharged, in mid-June last year.

The stoma was removed three months later and now the young woman is back to full health, but if she hadn’t been diagnosed at an early stage the outcome may have been very different. “It has been an incredibly hard year, and I still am not 100 per cent, but I have my life ahead of me because I had the colonoscopy that saved my life,” she says. “I put off going to the doctor for months because I was embarrassed to talk about my bowels or to tell my friends and family that I was in pain.

“I was incredibly lucky to get treated so quickly last year, and I often think that if I had symptoms now, when there is such a wait for colonoscopies, that I probably wouldn’t have been treated for months. That is incredibly scary, as who knows what would have happened. Early detection is key and is the difference between a tough year and the rest of your life.”

The symptoms, and what to do if you have them

Latest figures from the National Cancer Registry Ireland show there were an estimated 2,775 new cases of bowel cancer in Ireland per year over the period 2015-17.

Of that figure, about 1,600 cases were diagnosed among men and about 1,100 among women. Kevin O’Hagan, cancer prevention manager with the Irish Cancer Society, says it is very important that people are aware of the signs and seek advice if they have any concerns.

“Signs of possible bowel cancer include a lasting change in your bowel habit – such as going to the toilet more often, looser movements or constipation – discomfort or bleeding from your back passage, and also pain, discomfort, trapped wind or fullness in your tummy,” he says.

“Further symptoms include a lump in your tummy area or rectum, unexplained weight loss, feeling tired and breathless due to anaemia or feeling you have not emptied your bowel fully after going to the toilet. All these symptoms can be caused by conditions other than cancer, but it’s important to go to the GP and get any unusual changes checked out, especially if they go on for more than four weeks.”

“And lifestyle factors such as obesity or being very overweight, having a diet high in fat and red meat and low in fibre, fruit, and vegetables, drinking alcohol to excess and smoking may increase the risk for some people.

“Having a risk factor doesn’t mean you will definitely get cancer, and sometimes people with no risk factors get the disease. But your chances of surviving a bowel-cancer diagnosis are much better if it is caught at an early stage compared to when diagnosed at a later stage, so anyone with symptoms – and especially anyone experiencing persistent symptoms for more than four weeks – should talk to their GP about getting them checked.”