‘I could go nine months without having a period’ 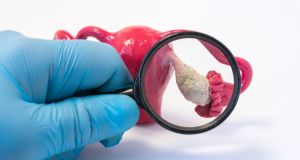 “The typical features of polycystic ovaries – a necklace of tiny follicles around the ovaries – are seen on ultrasound.” Photograph: iStock

Acne, excess facial hair, irregular periods and weight gain, some of the ‘normal’ side-effects of being a teenage girl, could in fact be indicators of an underlying condition.

Between 10-15 per cent of women are now believed to have polycystic ovarian syndrome (PCOS), a hormonal condition with many long-term implications, including infertility and a higher risk of developing type 2 diabetes.

“It’s very common,” says Dr Rishi Roopnarinesingh, consultant in obstetrics and gynaecology at the Rotunda Hospital, Dublin. He explains a diagnosis of PCOS is usually given to a woman if she has at least two of three of the following issues:

– “Some clinical or biochemical evidence of hyperandrogenism – excess levels of male hormones – for example excessive hair on the face or chest, or a blood test showing that androgens are elevated, triggering acne.”

– “Evidence of irregular, infrequent or incomplete ovulation, and that typically is manifested with a disturbance in the menstrual cycle.”

– “The typical features of polycystic ovaries – a necklace of tiny follicles around the ovaries – are seen on ultrasound.”

Symptoms will vary from woman to woman. As a reproductive gynaecologist, Dr Roopnarinesingh mainly diagnoses PCOS in women with fertility concerns. “I would see ladies who have an ambition to start a family. They come to me and it all unfolds. They might typically only have menstrual periods every now and again, and they haven’t linked this with the fact that they might not be ovulating regularly.”

Though associated with obesity, many women with PCOS have no weight issues, like 16-year-old Ciara McCloskey, recently diagnosed after being referred for an ultrasound by her GP when she presented with stomach and back pain. “When I was told, I looked it up. When I read about the facial hair, and the acne, and the irregular periods, everything started to make sense,” says Ciara. “I thought the excess facial hair was because I was dark-haired, but the acne was very bad. I’ve been on and off different antibiotics for years.

“I also wasn’t getting regular menstrual cycles. I was told this was normal for a teenager, but it hadn’t settled down after four years. I hadn’t had a period yet this year, and I’ve gone a year before without one, but I get symptoms every month, without actually having it. The moods can also be really bad.”

When she does have a period it will be extremely heavy and accompanied by painful cramps that can last more than a week. “And I get really tired. I’m in bed the whole time. I can’t even go to school when I’m on it. I’d probably just fall asleep in class.”

Ciara was recently prescribed the oral contraceptive pill, one of the mainstay treatments for PCOS. “The GP felt that this would help with the skin and the moods and the other symptoms.” The first type she tried helped her pain, but not the acne, and she has now changed to a pill with different hormone levels.

Like Ciara, Genea Murphy had very irregular and difficult periods as a teenager, and her doctor at the time indicated that PCOS might be the cause.

“I didn’t have the weight, but I had a bit of acne. My main issue was that my cycle was so varied. I could go nine months without having a period. She just told me that whenever I tried to conceive I would have difficulty.”

It was six years ago, while trying to get pregnant, that Genea, now a nurse, was officially diagnosed with polycystic ovaries, following an ultrasound scan.

“My GP basically said give it a year of trying naturally before anything assisted,” recalls Murphy, who decided to research the condition and see what she could do to help herself in the meantime. Exercise and diet, she discovered, were key for PCOS.

“I’m not sure if it was the reason but when I cut out gluten I found that my periods did become more predictable and shorter. I felt less sluggish and tired, and with exercise – I was doing a lot of running – my periods became more regular. I wasn’t ever very overweight but I would have had a little bit of weight and that mightn’t have helped.”

Murphy did not require any further treatment for her PCOS. “I was lucky. We conceived really quickly so I must have been ovulating from time to time.

Over the years Murphy was prescribed different hormonal pills to try and regulate her cycle. “I didn’t have the heavy periods I would have had otherwise, but when I came off them I just went back to normal. The only longer-term solution was the diet and the exercise. As a nurse, I also know the risk I have of developing diabetes with PCOS, and I’m very conscious of avoiding that with a healthy lifestyle.”

Dr Roopnarinesingh agrees. “If the issue is menstrual irregularity, the oral contraceptive pill will regulate the cycle, but this must be facilitated by lifestyle changes as well, or else we are covering up the original problem.”

He recommends lifestyle changes – including exercise and the avoidance of refined sugars and carbohydrates – as the first stage of any PCOS treatment, as these can help control the endocrine disturbances associated with the condition.

Other treatments will also work better in conjunction with lifestyle changes, he adds.These will depend on each woman’s symptoms or concerns, and can include: acne medications; anti-androgen treatments, such as Dianet, to treat excessive hair growth; Metformin for women with glycaemic disturbance; and Clomid, the most popular drug in fertility treatment to stimulate ovulation.

‘My heartthrob days are over’: Joe Wicks on health, happiness and training

‘My heartthrob days are over’: Joe Wicks on health, happiness and training