How best to introduce your child to playing music

‘Group classes, just to get them exposed to music and having fun with it, is going to be more beneficial’ 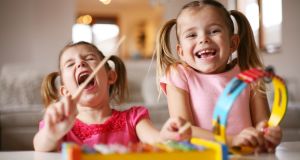 “Once the children feel and touch other instruments, you can be very surprised at what they are drawn to,” says Andrew Jordan, director of the Newpark Music Centre in South Co Dublin

Many music centres offer “pre-instrument” courses – are they really necessary?

The most important thing is to develop a culture of music at home, before you even think about lessons, says Andrew Jordan, director of the Newpark Music Centre in south Co Dublin.

“Sometimes, people see learning an instrument as something very separate and it’s a kind of ‘tick the box exercise’. Whereas it needs to be in the context of fostering a child’s appreciation of music, playing it at home and going to see live performances.”

Providing live performances of the highest quality for babies and toddlers is the idea behind Classical Kids, the brainchild of professional musicians Aura Stone and Sylvia Roberts, which stages concerts in Dublin and Cork. There is no dumbing down of the music for the babies, but, in a child-friendly setting, they can take it at their own level, says Stone.

“My favourite moment and the whole reason we do this is when you see, at the beginning of the concert, the babies on the play mats, rolling around or whatever, and when the music starts they just drop whatever they have in their hands and look up and stare. Some of them sit and stare for 40 minutes, dipping in and out. I think we do them a disservice if we think they are only able for the happy clappy stuff.”

With something like a cello that is connected to the floor they are sitting on, babies “can feel the vibrations through their nappy”, she says with a laugh. It is a multi-sensory experience – they are surrounded by sound, can see what is happening and they can feel it in their bodies.

“The same pathways that are used later for language and maths. We probably don’t know the half of it yet.”

While pre-instrument classes are not “necessary”, says Jordan, he recommends parents avail of them if they are available locally, as he believes interaction with other children is beneficial. In summary, they “provide a slightly more structured outlet, in which you can develop some skills in music”.

The other big advantage is that they should give children a better sense of what kind of instrument they would like to play.

What is an appropriate age to start learning an instrument?

Around six years of age is fairly typical for various “starter” instruments. Size of the child and attention span are factors in deciding what they should play and how they might learn it.

At five, six or seven, even a 20-minute individual lesson may be too much, says Dr Patricia Rooney, director of the Academy of Popular Music in Cork.

“That is why at that age, group classes, just to get them exposed to music and having fun with it, is going to be more beneficial.”

Let your child have a say in the choice of instrument.  See if a music centre near you offers “try out” sessions or, as mentioned above, these may be part of a pre-instrument course.

“Once the children feel and touch other instruments, you can be very surprised at what they are drawn to and it is that attraction which sustains their interest as they grow up,” says Jordan, a trumpet player who started his musical education with a marching band.

In the case of wind or brass instruments, a local band would probably be happy to let your child come and try different instruments, he suggests.

What genre is best for a child starting out?

Sometimes you fall into a genre just by how you learn your instrument – be it at a music centre that’s geared towards classical music or within circles of trad players. However, increasing diversity in opportunities makes it an exciting time for children’s music education – and may reduce the drop-out rate among older children.

As a teacher of classical flute, Rooney had pupils who were never going to be professional musicians and for whom she feared learning music was rapidly becoming more of a chore than an enjoyable hobby.

“I was finding they would do their three pieces for their exam, then the flute would go under the bed for the summer and they would take it out again in September. Trying to get them to do their scales was like pulling teeth.”

She decided to experiment with styles – introducing pop songs and listening by ear – and “they were bouncing in the door to me”. It spurred her to do further research in music education and push for the setting up of the country’s first Academy of Popular Music, of which she is director, within the Cork School of Music

At the outset, learning an instrument is similar for all types of music.

“Get a good technique, but expose yourself to different genres,” advises Jordan, who explains how music education is changing in Ireland towards a more child-centred approach.

Exams are not the only way to judge success.

“When you are assessing a child musically, you need to look at the activities they are doing outside of exams”, he adds. “Exams alone will not sustain the interest and motivation of a child into adulthood.”

Whereas a love of music and good foundation in playing an instrument probably will.