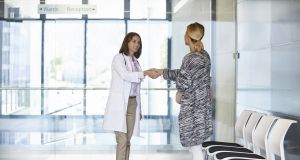 This was written by Dr Kate Granger MBE in the British Medical Journal a few years ago describing her experience as a patient in a UK hospital.

Having “lost count of the number of times I have to ask staff members their names” and believing that a good introduction “is the first rung on the ladder to providing truly compassionate, patient-centred care”, Dr Granger began the #hellomynameis campaign.

She had terminal cancer, and by the time of her death on July 23rd, 2016, aged just 34, #hellomynameis had gained widespread national and international attention . . . and approval.

So how good are doctors in Ireland at introducing themselves?

To find out, a five-month studywas undertaken last year at Our Lady of Lourdes Hospital, Drogheda. The study’s twin aims were to determine how often consultant and non-consultant hospital doctors (NCHDs) introduced themselves, andto determine the extent to which introductions influenced doctor-patient interaction.

Altogether, 353 patients – 253 outpatients and 100 inpatients – participated in a survey conducted after their respective consultations.

So, how did introductions affect patients?

Co-author of the study Dr Eva Doherty is director of human factors in patient safety at the Royal College of Surgeons in Ireland, and the national representative for Ireland of the International Association for Communication in Healthcare.

Commenting on their findings, she told The Irish Times: “This is one of the first studies of its kind in Ireland. It is very reassuring to find that consultants are role-modelling effective communication skills to their junior doctors and that the majority of them are introducing themselves to their patients. The patients are correct to report that it makes a difference.”

Dr Doherty also drew attention to international evidence which indicates that doctors’ behaviour and demeanour are vital in enabling patients to feel valued and respected: “Evidence from social psychology research,” she added, “informs us that we make our first impressions of each other within milliseconds and the introduction is an important mechanism of optimisation of the patient doctor relationship from the outset. We are delighted to be able to add to the body of knowledge and public interest in this topic which Dr Kate Granger initiated through her twitter campaign #hellomynameis.”

Interestingly, the study paper was retweeted about 200 times after going to press, and according to the data science company Altmetrics, by the end of January 2018 it was in the top 2 per cent of journal papers tweeted.

More than a decade ago, English GP Dr Mike Jenkins reported to the British Journal of General Practice on “the meaning of the handshake towards the end of the consultation”.

During his year-long study, all patients offering a handshake when the consultation finished were asked to complete a questionnaire exploring their reason(s) for doing so. Of 5,368 consultations, there were 66 patient-initiated handshakes (55 males, 11 females; aged 23 to 86 years) representing 1.2 per cent of all consultations. Dr Jenkins noted that most handshakes (83 per cent) were offered by men, and the main reasons for handshaking (87 per cent) were related to patients’ perceptions of the doctor, the consultation and their care. “This small study,” wrote Dr Jenkins, “suggests that most handshakes offered by patients towards the end of consultations reflect patient satisfaction – ‘the happy handshake’.”

“Happy handshakes” do indeed “reflect patient satisfaction”, but these days, given the diverse ways in which spontaneous gestures of affection are expressed, would it be acceptable for exuberant patients who have been given the all-clear to exchange high-fives and back-slapping hugs with their physicians? Perhaps not.

Yet, on the other hand, writing in the Journal of Medical Ethics in 1979, Dr Anthony R Moore contemplated patients’ expressions of gratitude, noting that “such gestures always bespeak an expression of trust, and gratification because they are a response to some human restoration . . . The doctor’s reward need not be material. A direct gaze from appreciative eyes, the hand placed over the handshake, or the face open with trust: they all speak intensely.”

Dr Granger’s #hellomynameis campaign was a sharp corrective to the notion that we live in an age of communication.

The fact that most of it is screen-based does not absolve us – both health professionals and patients – of a responsibility to communicate at a human level too.

It is part of what helps make us civilised.