Why are so few teenage girls cycling to school? 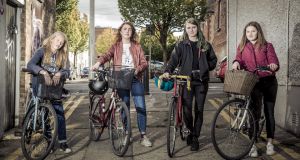 Why are so few teenage girls cycling to school? This was the question that the An Taisce Green Schools programme managers asked school-going girls recently when they discovered that only one in 250 girls cycle to school in this country.

Everything from being self-conscious on a bike to how school skirts make it difficult to cycle to more serious issues of being harassed by boys and men for being on a bike were the answers that came back. And, so the #andshecycles video and social media campaign to get girls back on their bikes was born.

Katie Shea (16), who goes to school in Gael Colaiste na Mara, Arklow says that she cycles around her home town of Wicklow but understands why many girls don’t cycle. “School skirts are annoying and girls don’t want to be seen on a bike. They are self-conscious about how they look but I’ll talk to my friends about the #andshecycles campaign,” says Shea who attended the campaign launch in Dublin’s Science Gallery.

Shauna Ryan (18) says she cycles between her home and her sports club but can’t cycle to her school in Bray because she has a heavy school bag and often a hockey bag as well.

“I’d like to start “Cycling on Wednesdays” (COW) as I’m the sports prefect at my school but we’d have to find ways to leave our sports gear in school,” says Ryan who attends Loreto College in Bray, Co Wicklow. These so-called COW days would complement the already developed Walking on Wednesdays (WOW) initiatives in many schools working towards the Green Schools Transport flag.

‘I’d be a bit self conscious’

Hayley Keogh (15) from Newbridge, Co Kildare says that she cycled in first and second year but stopped cycling in third year. “I’d be a bit self conscious and the lads are quite judgemental. If more girls weren’t afraid of cycling, I’d be braver too,” says Keogh who is now in 4th year.

Her mum, Tara Keogh adds that cycling for girls needs to become trendy again. “I’ve been cycling since I was 10 and I’ve pushed my girls into cycling. Less than 10 girls cycle to their school yet all the boys cycle to school and it’s not an issue.”

Aislinn McDaid, Leaving Cert student in Loreto College, St Stephen’s Green was one of the panellists at the launch of #andshecycles. Out of the 550 girls in her school, only two cycle to school. “I cycle to school from Phibsboro. My parents were hesitant at first because there are not enough cycle lanes. But, I wear a helmet and cycling to school wakes me up. I feel so much better afterwards,” she says.

‘Safety can be sexy’

Wearing helmets is something that many teenage girls don’t like and those who do wear helmets often take them off at the school gates. Caitriona Buggle from An Taisce says that new colourful helmets should encourage girls to see them as a fashion accessory. “Safety can be sexy,” she jokes, adding however that making helmets compulsory has discouraged people from cycling in Australia and New Zealand. “The focus on high vis jackets and helmets can scare people off.”

Lara Gillespie, Irish champion cyclist was another panellist at the launch. She says that girls need to realise that boys get just as nervous and self conscious about cycling but they push through it. “Girls care too much about what other people think. Cycling is often the easiest, quickest way to get places and you can feel the air in your lungs. I also think it is family responsibility to get children on bikes from a young age so it’s something they are comfortable doing.”

Prof Catherine Darker, health psychologist in the School of Medicine at Trinity College Dublin says that parents should encourage their daughters to cycle. “The differences between boys and girls in terms of physical activity and sports start between age seven and nine. Four out of five nine-year-old boys identify sports as a hobby while only one in three girls do. It’s a huge shame if girls are instilled with fear of cycling at a formative age.”

Prof Darker believes that girls need more role models at home and in schools. “If they see women and older girls cycling, they are more likely to give it a go. It makes you feel good to be on a bike. It gives you great freedom and spontaneity. An active child is also more likely to become an active adult,” says Darker, who is the co-chair of Healthy Trinity which runs campaigns to encourage female students to cycle to college.

Ciara Norton from An Taisce says that while the organisation can’t solve the safety and infrastructural concerns around girls cycling to school, the Green Schools programme does cyclability audits which they send to the local councils.

“We can point out improvements that can be made but this campaign is about encouraging girls back on their bikes.”