Running in minimal shoes and landing on balls of feet may cut injury risk, research says 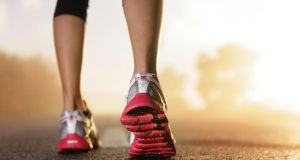 Many runners have chosen to go minimal when running, but the great majority of runners remain attached to their expensive footwear.

If you want to lower risk of injury while running, leave the expensive footwear behind and run with minimal or no shoes.

Research from the University of Exeter suggests “minimal” shoes may reduce running injuries.

This is the latest in a number of studies looking at whether it is better to adopt a “rearfoot strike” running style – hitting the ground with the heel – versus a “forefoot strike” style where you land on the ball of your foot.

The researchers studied 29 runners looking at the physics of their footfall and how much loading was involved. It is the loading that influences the running injury risk, they said.

Injury is not a minor consideration, said lead author Dr Hannah Rice of Exeter who published research findings in the journal Medicine & Science in Sports & Exercise.

“So many people use running as a means of reducing the risk of chronic diseases, but about three-quarters of runners typically get injured in a year,” she said.

“This research shows that running in minimal shoes and landing on the balls of your feet reduces loading rates and may therefore reduce the risk of injury.”

Many runners have chosen to go minimal when running, suggesting they get more from the exercise and have fewer injuries. The great majority of runners, however, remain attached to their expensive footwear.

Rearfoot strike runners experience an abrupt vertical impact force that is not present with forefoot strike. Yet there are also sideways and forward/backward forces acting on the foot so the total force may be much the same, the researchers said.

But forestrike still comes out slightly better for those who avoid cushioning.

“Our research tells us that becoming accustomed to running with a forefoot strike in shoes that lack cushioning promotes a landing with the lowest loading rates, and this may be beneficial in reducing the risk of injury,” Dr Rice said.

The research was co-authored by colleagues at the Spaulding National Running Centre at Harvard Medical School in the United States.