‘I track money launderers for a living. It’s not as exciting as my running’

She never ran before 2013. Now ultrarunner Jan Corcoran wants to be an Olympian 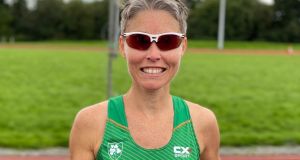 Jan Corcoran was never really a runner. She had to run with all the other sports she did – such as soccer and tag rugby – but she didn’t have any structured training around her running, so she didn’t get into it.

That all changed when her grandfather became ill in 2013. They were very close, and Corcoran began nursing him.

Running became her saviour – her outlet to clear her head.

“I just put the runners on and just went for a run. I would run to so many lampposts and then come back. Each day it just seemed to get further and further. I was starting to think it was quite fun in a weird kind of way,” says Corcoran.

“It helped, whether it would be 10 minutes or an hour, it was my escape when the nurse would come in or my aunt would be there. I would just go and have that to myself and then come back and then start all over again.”

A friend suggested she join a running club but she was worried she wouldn’t be up the level of everyone else. To her surprise, she fit right in. “My grandfather had passed away in November of 2013, so I really kind of started then after Christmas getting into it and started doing 5km runs. Park runs weren’t available then. I built up to 10km and I swore I’d never go over the 10km,” she says.

This didn’t last long. While out on a 10mile run one day a fellow club mate suggested she should enter the Clontarf Half Marathon in November 2014.

After all, it was only three miles further.

The following year, she completed her first Dublin Marathon in a time of 3hrs 53mins. The running bug had bitten her, and a long-distance runner was born.

At the end of August, Corcoran represented Ireland in a long-distance running event organised by International Association of Ultrarunners. “The race was the IAU 6hr Virtual Global Solidarity Run. Each country entered teams of males and females – and athletes had to run in a six-hour continuous block on either the 29th or 30th August,” she explains. “Our team manager submits all the official results back to the federation.”

Corcoran had been waiting for the chance to represent Ireland in a 100km race this year in Boddington in central England, but unfortunately due to Covid-19 the dates for the race kept moving until it was eventually indefinitely postponed.

As she had the race in her sights, Corcoran was continuously training. Even during the last Kildare lockdowns, she was out doing laps and laps of the local St Catherine’s Park, in Leixlip, to keep up with her training schedule meaning she was ready for the Virtual run when she got the call up. “I was absolutely delighted to get the opportunity to be selected for Team Ireland for this, while it wasn’t the official debut I had planned, it was still a day I got to pull on the Ireland singlet and test all my training. I managed to run 73.75km in the six hours on a 400m track – let’s just say I was certainly dizzy afterwards,” she says.

“There were 426 athletes around the world taking part in the event so it was a great show of solidarity with so many races been cancelled around the world. Even though we ran apart it felt like we were in it together, if that makes sense.”

Corcoran is setting her sights on an even bigger world stage now; her goal is to reach the 2024 Olympics. With the improvements she has made to her running, which includes shaving a whole hour off her marathon time from her first attempt, she feels that she has the best man in her corner – her Le Chéile Athletics Club coach, ultra-runner John O’Regan.

He encouraged her to sign up to her first 50km race, in which she came second. It was a race she became very nervous in, something she has worked hard on to deal with while racing. “Running is 80 per cent mental and 20 per cent fitness,” says Corcoran who has a few techniques to keep her head while racing. “I think back to my granddad watching me or God forbid somebody who can’t run who would love to do what I do – and then as well, my coach, he puts in so much work and effort into coaching me, training and doing plans and making sure I’m alright. I don’t want to let him down as well, because he’s put in so much work into me, and he’s not paid for it, he does it because he loves it.”

She also puts mantras on her running gels such as stickers of her grandfather, her wife and her dog to look at when she’s mid-race to keep her going.

Despite the Olympic dream, the miles of training and the chance to race for Ireland Corcoran holds down a full-time job as a money laundering consultant. “I just basically watch that the bad guys aren’t trying to launder money through banks, accounts and proceeds of crime,” she explains. “It’s not as exciting as my running. I’d rather be doing the running full-time, but, unfortunately the bank manager doesn’t agree with me.”

The story of Jack-o’-lantern: ‘If you knew the sufferings of that forsaken craythur’
5

Start them stirring, knife skills at four: how to teach kids to cook
8