‘When it comes to dealing with terminal cancer, all rational thoughts go out the window’ 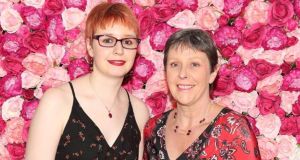 Rachel O’Neill and her mother Marie.

Unless it’s being used to describe where you want to be picked up at the airport, the word “terminal” isn’t one you want to hear. It carries weight like no other word. You say it and it just hangs in the air, creating an awkward atmosphere for everyone around you.

Unfortunately, I’m someone who deals with this awkward atmosphere on a regular basis because my mum Marie has incurable triple-negative breast cancer. It’s an aggressive form of breast cancer which normally afflicts younger women. She was 45 when she was originally diagnosed and went through chemotherapy and radiotherapy as well as a mastectomy before eventually being declared clear.

She had a 25 per cent chance of recurrence and just a few months after she celebrated five years of being clear it returned.

We’re now at an impasse. When the medicine stops working, the cancer will become terminal. We don’t know when but all I know for certain is at some point in the future I’m going to lose my mum much earlier than I should.

At this age I should be out socialising with my friends

Terminal illness isn’t something you expect to deal with at 24 years of age when you’re trying to start your adult life. I’ve just begun my career in advertising and am still adjusting to the demands of everyday life. At this age I should be out socialising with my friends, travelling the world and not worrying about the future. While my mum having terminal cancer doesn’t stop me doing any of these things, it forces me to make a choice. You ask yourself whether, if she begins to decline while I’m gone, I could forgive myself for leaving to begin with? Could I live with myself for being in southeast Asia instead of being there with her in her last few months?

So you stay in Dublin and start your career instead. You tell your friends about your mum and they react appropriately, saying things like ‘That’s awful” and “If there’s anything you need, let me know”, stuff that we should all say. You find that you can tweet all you want about it to random strangers but you are struggling to pluck up the courage to tell your employer.

I was only two months into my new role and even though I adored the job I was finding it hard. My mother had begun to describe her illness as “terminal” for the first time and it had sent me into a tailspin. I’d known for years that mum’s cancer was incurable but the word “terminal” brought up a whole new set of emotions and feelings that I had avoided dealing with.

You see, illness warps your perception of both yourself and everyone around you. You’re terrified that if your work colleagues know then you’ll become “the girl with the sick mum” and that their view of you will change. You worry that they’ll see you as weak or attention-seeking or worst of all, that they’ll think you’re using it as an excuse to get out of work.

All of this is obviously irrational but when it comes to dealing with terminal cancer, all rational thoughts go out the window. Instead, your brain goes into overdrive, screaming at you not to tell them and to just keep going. It tells you not to let this break you and to pretend like there’s nothing wrong when in reality you’re struggling with the idea of losing one of the most important people in your life.

I could keep pretending nothing was wrong

Given we spend eight hours a day or more in our workplace, anything serious that happens outside of it is going to affect your work. I could keep pretending nothing was wrong but it would affect my work performance either now or in the future. When it came down to it I knew I would have to tell them what was going on even if I was scared of how they might react.

One morning, I pulled my manager aside and asked could I speak to him about something. He took me into a room where I explained what was going on with mum. I spoke quickly, scared I would burst into tears if I didn’t get it all out at once. When I said my piece he just looked at me and then said exactly what I needed to hear: “You don’t owe me an explanation; anytime you need some time off, just let me know.” With that one sentence he removed any doubts I had about telling work. All I felt was utter relief.

That relief allowed me to slowly tell the rest of my work colleagues about it. It removed any guilt or shame I had carried and relaxed me a little too. It meant I could be more open and honest with people about my life away from work and it stopped me from stressing too. All it took was a little empathy and someone to tell me that it was okay to be open about your struggles in the workplace.

Having a terminally ill parent has taught me a few things. It’s taught me that people, even if you’ve just met them, will try to help you as much as they can when you’re struggling. It’s taught me to give myself a break, to cry and to say yes, it’s tough having a terminally ill parent but it’d be even worse to be upset about it all the time. Being upset and stressing about it won’t take the cancer away, it’ll just make me sick too.

Finally it taught me to appreciate time more. This year I let my mum convince me to take some time off work and spend a few days in Rosslare with her and my Nana. We’re going to drink some gin and tonics, eat some seafood chowder and not worry about anything cancer-related.

Because if mum has taught me anything, it’s that life is for living.

Fair Deal nursing home scheme and the family home: how does it work?
3

Online buyers snap up rural properties in one day auction
8