My six-year-old’s bedwetting is damaging his self-esteem

Who or what is to blame? Send your parenting queries to health@irishtimes.com 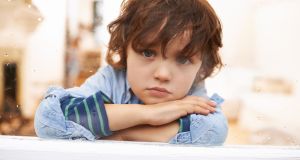 Reassure your son that the bedwetting is not his fault and that lots of children have this problem, though it is usually kept private.

I have a bit of a problem with my six-year-old son. He is the youngest of three, a well able and very talented little chap, although he thinks he is terrible at everything.

I think the underlying problem is his bedwetting. He has never gotten control of it. The bed is wet pretty much every night, and he often wets himself during the day.

I have tried everything – reward charts, no drinks after 5pm, lots of toilet trips during the day – but nothing seems to work. He says he wants to stop; I have told him that he is the only one who can make it happen. He is now back in pull-ups (I couldn’t keep up with the washing). I tried alarms two years ago, but maybe he was too young. I’m wondering should I try them again, or what should I do?

I worry that this will have a very negative impact on his self-esteem and confidence. I didn’t have this problem with my older two. Would you have any advice for me?

Bedwetting is a common and increasingly frequent problem in young children, which can continue even into the teenage years. It is also an embarrassing and secret problem, and many like your son feel “ashamed” and that they are somehow at fault.

However, it is important to realise that bedwetting is a physical problem that the child has no control over. Therefore it is important not to give your son the message regarding stopping that “he is the only one who can make it happen”, as this will only make him feel he is to blame and damage his self-esteem even further.

Unfortunately, there are many misinformed “experts” who propose “psychological” causes for bedwetting, or that the child does it on purpose (or even that the parents are at fault in how they react ). These explanations are not just false – they tend to increase the blaming of children and the parents for the problem and are of little practical use.

There are physical causes for bedwetting in children over the age of five, namely constipation, an overactive bladder, producing too much urine at night, or not being able to pick signals from the bladder. There are also specific illnesses, such as urinary tract infections.

The children’s bowel and bladder charity called Eric (for Education & Resources for Improving Childhood Continence ) is an excellent UK organisation that provide clear information on all the causes and treatments at eric.org.uk.

According to Steve Hodges, a North Carolina-based urologist, the No 1 cause of bedwetting is undiagnosed chronic constipation, whereby the bowel becomes impacted and dilated. This in turn puts pressure on the bladder at night, causing it to leak.

On his website (bedwettingandaccidents.com), Hodges explains how constipation is frequently underdiagnosed by GPs and health professionals and then not treated thoroughly enough once it is. Constipation as a problem is growing in the western world due to poorer diets (eg less fruit and vegetables) and poor toilet-training habits.

Hodges provides a detailed protocol for treating constipation over a period of months with the goal of helping your son gain control of his bladder at night. There are also a number of excellent resources that can explain the problem to your son in a non-blaming way, including a read-to book, It’s Not Your Fault!.

The first step is to get an accurate assessment of what underlies his bedwetting. I would suggest you take your son to see his GP, who may be able to provide assessment and treatment and also make a referral to a specialist. I would also strongly suggest you read the resources above so you are fully informed of the options for your son, as it will be you as the parent implementing the treatment.

Remember: treatments for resolving constipation, such as enemas, or alarms to help him learn to detect bladder signals, all take time to work. So you and your son will need a lot of patience to persist.

Many parents wonder if they should use pull-ups at night or continually change the sheets. I usually suggest adopting the strategy that least troubles the child – pull-ups can allow the child to not worry and to feel less shamed.

Talking to your son

Reassure him that the bedwetting is not his fault and that lots of children have this problem, though it is usually kept private. Be positive and upbeat and explain that the two of you will overcome the problem together. Relax his expectations and explain that the goal is about making gradual progress over several months.

Focus on what he can do to help, such as complying with treatment and developing good toileting habits (such as never “holding on” to a wee or poo and setting routines for going to the toilet – eg first thing in the morning). Encourage him to drink plenty of water early on in the day and to eat healthy foods, such as fruit and vegetables.

Finally, make sure to keep focused on building your son’s self-esteem. Don’t make a big deal out of the bedwetting– it is simply a minor problem that together you will overcome in time. Instead, focus on all things he is good at and all the thing he enjoys – and don’t let the bedwetting interfere with him getting on with his life.

Dr John Sharry is a social worker, psychotherapist and co-developer of the Parents Plus Programmes. His new book, Bringing Up Happy Confident Children, is now available. See solutiontalk.ie