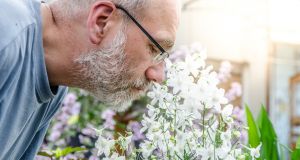 In the last week, British ear, nose and throat doctors called on adults who lose their senses of smell to isolate themselves for seven days. Photograph: iStock

A mother who was infected with the coronavirus couldn’t smell her baby’s full nappy. Cooks who can usually name every spice in a restaurant dish can’t smell curry or garlic, and food tastes bland. Others say they can’t pick up the sweet scent of shampoo or the foul odour of kitty litter.

Anosmia, the loss of sense of smell, and ageusia, an accompanying diminished sense of taste, have emerged as peculiar telltale signs of Covid-19, the disease caused by coronavirus, and possible markers of infection.

During March, British ear, nose and throat doctors – citing reports from colleagues around the world – began calling on adults who lose their senses of smell to isolate themselves for seven days, even if they have no other symptoms, to slow the disease’s spread. The published data is limited, but doctors are concerned enough to raise warnings.

“We really want to raise awareness that this is a sign of infection and that anyone who develops loss of sense of smell should self-isolate,” Prof Claire Hopkins, president of the British Rhinological Society, wrote in an email. “It could contribute to slowing transmission and save lives.”

She and Nirmal Kumar, president of ENT UK, a group representing ear, nose and throat doctors in Britain, issued a joint statement urging healthcare workers to use personal protective equipment when treating any patients who have lost their senses of smell, and advised against performing nonessential sinus endoscopy procedures on anyone, because the virus replicates in the nose and the throat and an exam can prompt coughs or sneezes that expose the doctor to a high level of virus.

Two ear, nose and throat specialists in Britain who have been infected with the coronavirus are in critical condition, Hopkins said. Earlier reports from Wuhan, China, where the coronavirus first emerged, had warned that ear, nose and throat specialists as well as eye doctors were infected and dying in large numbers, Hopkins said.

The British physicians cited reports from other countries indicating that significant numbers of coronavirus patients experienced anosmia, saying that in South Korea, where testing has been widespread, 30 per cent of 2,000 patients who tested positive experienced anosmia as their major presenting symptom (these were mild cases).

The American Academy of Otolaryngology have posted information on its website saying that mounting anecdotal evidence indicates that lost or reduced sense of smell and loss of taste are significant symptoms associated with Covid-19, and that they have been seen in patients who ultimately tested positive with no other symptoms.

The symptoms, in the absence of allergies or sinusitis, should alert doctors to screen patients for the virus and “warrant serious consideration for self-isolation and testing of these individuals,” the academy said. The American organisation has reminded its members that the Centers for Disease Control and Prevention has urged all clinicians to prioritise urgent and emergency visits for the next several weeks and to reschedule elective and routine procedures.

“There is evolving evidence that otolaryngologists are among the highest risk group when performing upper airway surgeries and examinations,” said a notice posted on the academy’s website. “A high rate of transmission of Covid-19 to otolaryngologists has been reported from China, Italy and Iran, many resulting in death.”

Dr Rachel Kaye, an assistant professor of otolaryngology at Rutgers, said colleagues in New Rochelle, New York, which has been the centre of an outbreak, first alerted her to the smell loss associated with the coronavirus, sharing that patients who had first complained of anosmia later tested positive for the coronavirus. “This raised a lot of alarms for me personally,” Kaye said, because those patients “won’t know to self quarantine”.

“Most ENTs have on their own accord tried to scale down,” she said, adding that her department at Rutgers had already started using personal protective equipment and stopped performing nonessential exams.

In the areas of Italy most heavily affected by the virus, doctors say they have concluded that loss of taste and smell is an indication that a person who otherwise seems healthy is in fact carrying the virus and may be spreading it to others. “Almost everybody who is hospitalised has this same story,” said Dr Marco Metra, chief of the cardiology department at the main hospital in Brescia. “You ask about the patient’s wife or husband. And the patient says, ‘My wife has just lost her smell and taste, but otherwise she is well.’ So she is likely infected, and she is spreading it with a very mild form.”

A study from South Korea, where widespread testing has been done, found that 30 per cent of some 2,000 patients who tested positive for the coronavirus reported experiencing anosmia.

Hendrik Streeck, a German virologist from the University of Bonn who went from house to house in the country’s Heinsberg district to interview coronavirus patients, has said in interviews that at least two-thirds of the more than 100 he talked to with mild disease reported experiencing loss of smell and taste lasting several days.

Another physician who studied a cluster of coronavirus patients in Germany said in an email that roughly half of the patients had experienced a smell or taste disorder, and that the sensory loss usually presented after the first symptoms of respiratory illness, but could be used to distinguish people who should be tested.

Dr Clemens Wendtner, a professor of medicine at the Academic Teaching Hospital of Ludwig-Maximilians University of Munich, said that the patients regained their ability to smell after a few days or weeks, and that the loss occurred regardless of how sick they got or whether they were congested. Using nasal drops or sprays did not help, Wendtner said. – New York Times