Conor Pope: Running is boring – there, I’ve said it

I am used to finding running physically challenging. Now I have to face the mental challenges 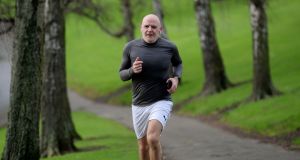 Conor Pope: “As I ran the park on a morning with hints of spring in it, with inappropriate music blasting in my ears, I found myself wilting internally.” Photograph: Alan Betson

Lickspittle. Shill. Goon. Vermin. These are just some of the things I’ve been called in recent days by a cohort of mostly male, largely anonymous social media users who are pursuing a particular agenda fuelled by a noxious cocktail of fear and rage.

The details of that agenda could scarcely be less relevant here and I have been easily able to allow the impotent insults wash over me. I only mention the toxicity now because it stands in such stark contrast to the positivity that has been so easy to identify amongst the runners of our world.

And that positivity is life-affirming.

I first noticed it on a bright, cold morning at the end of October, when tasked to write a colour piece about the Dublin City Marathon for the pages of this newspaper.

Intrepid reporter that I am, I decided to start my assignment on the actual route rather than lazily rocking up to the end of the race and asking a few knackered finishers how they felt. The fact the route passed 100m from my front door had nothing to do with that decision.

I was being intrepid, okay.

Anyway, there I was standing on the North Circular Road, close to the Phoenix Park, idly marvelling at the futility of the exercise when the elite athletes ran past. I was stuck by how bloody fast elite athletes run – but what struck me most forcefully was the positivity coming from the watching crowd.

There were words of encouragement for every runner. I walked the route then, heading in the opposite direction of the participants and it was the same at every step.

The enthusiastic encouragement just went on and on and it wasn’t only directed at the fast runners. I walked past every single competitor – they ran past me is more accurate– and there were good vibes washing over each of them.

“Jaysus, if you could bottle that feel-good energy and flog it, you’d make a mint,” I thought as I lazily made my way to the finishing line on a city bike to ask a few knackered finishers how they felt.

I forgot about the positivity entirely until I started running myself for the purposes of this column. But there it was again, only this time it was directed at me.

I have received texts, tweets, emails, Facebook messages and Instagram comments from people I know and people I don’t know willing me on. I had a journey of encouragement from a taxi driver I didn’t know from Adam. There have been so many people applauding my efforts – poor as they are – and offering me tips on how to get better and suggesting runs I might go on in the future that it has been almost overwhelming.

It has also been as far removed from the crushing negativity that is more commonly found in many of the anti-social media hangouts I frequent as it is possible to get.

“Amn’t I only great,” I was thinking to myself as I got ready to set off on another Phoenix Park run last Tuesday morning. “Maybe I’ll keep this running thing up. Maybe I will run a marathon.”

Off I went at a fair auld clip, covering the first 2km in just over 11 minutes – even my super-judgey running app was impressed – and then something unexpected happened.

I am wearily used to finding running physically challenging, so much so that the mental challenges have never really presented themselves but as I ran the park on a morning with hints of spring in it, with inappropriate music blasting in my ears, I found myself wilting internally.

At least twice, I resolved to just stop running and walk home, not because I was flaked but because I was bored. But I kept running because I knew that if I didn’t I would never get to 10km

“I’ll go on,” I resolved, only delighted with myself for having shoehorned a line from Samuel Beckett into my run.