‘Leukaemia, cancer, Crumlin – all in one sentence. Everything just stopped’

Ten-year-old Lily Burke needed three years of chemo after her diagnosis, as a toddler 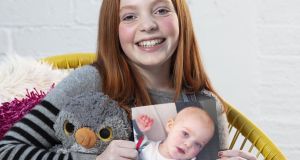 Lily Burke with a photograph of herself as child.

At the age of 20 months, Lily Burke was a healthy toddler, full of energy. So her mum Jess grew concerned when Lily developed a high temperature. They went to their GP, who gave them Calpol and Neurofen.

“I had one foot out the door,” recalls Jess. “And he had another look at the reading. He said it was pretty high, and that she might have a bit of flu and need a drip. So he referred us to the CUH [Cork University Hospital] for blood tests as a precautionary measure. Now, there were no associated bruises. She’s very fair and has red hair, so didn’t look paler than normal. There were no telltale signs.”

The doctors told Jess that Lily’s white blood cell count was high, and her platelet count was low. “We thought it was a blood disorder or disease. Then they said they were lymphoplastic cells – also known as leukaemia cells, and that they would try to get her a bed in a cancer ward. Leukaemia, cancer, Crumlin – all in one sentence. Everything just stopped. I was a single parent at the time, a young mother, and she was all I had.”

Lily was diagnosed with acute lymphoblastic leukaemia, with a 90 per cent chance of survival.

“All I could see was the 10 per cent,” Jess recalls. “You black out. Everything just becomes a blur after a while.”

Within hours, Lily was undergoing a blood transfusion in an isolation unit and was transferred to Crumlin Children’s Hospital, where she underwent chemotherapy for three years.

Now, I take nothing for granted. Even her first time at school, other mothers were crying, but I was just so happy she made it

When that finished, Jess found it hard. “You become so reliant on the structure of it all,” she says. “We were up every week, or for weeks on end. Every day she had some form of chemo, even sometimes at home.

“Crumlin were amazing, and we dealt a lot with the Mercy Hospital in Cork who were just unbelievably supportive. I was very upset at times in the middle of the night and Bernie the nurse there was a great friend to me, and another mum to Lily. Lily doesn’t have any bad memories, to be honest. She just remembers the nice nurses; she has fond memories. It’s a little chapter of her life, she knew no different, whereas for me it overshadowed everything.”

Lily is now aged 10, has been in remission for five years, and is an all-rounder at school, sport and art. “Now, she’s great, I’ve no worries with her. But any time she gets a little bruise I get worried. My other kid had a limp, which is one of the symptoms, but it is nothing to worry about.

“Now, I take nothing for granted. Even her first time at school, other mothers were crying, but I was just so happy she made it. I didn’t think she’d be alive, to be honest. When you’re there getting the diagnosis, I thought she’d never do so many things, like school.”

Lily now has her heart set on being an artist, and last summer won a poster-design competition to encourage people to pick after their dogs – they have a terrier-spaniel cross called Cleo. Her poster is up all around their home town of Cobh.

“I like to paint all different things,” Lily says. “I use paints when I’m allowed, or colour in drawings.

“The poster I designed was of a dog pointing, saying ‘your dog is not the problem – you are! Scoop the poop’. I also painted a picture of Cobh, with the church and the hill and the houses.”

The Shop That Nearly Wasn’t

The Shop That Nearly Wasn’t is stocked and staffed by cancer survivors, and includes art, photography and crafts donated by cancer survivors, such as Michael Flatley – who is selling a print of his Oscar Wilde painting – Senator David Norris, milliner Sarah McGahon, whose hats have been worn by Amy Huberman and Lady Gaga; rugby’s Tony Ward; RTÉ Supergarden winner Gráinne Walsh; director Stephen Bradley; and award-winning children’s author and illustrator Peter Donnelly.

Lily’s contribution to the shop is a tote bag design. “I like drawing a lot,” she says. “So I drew a picture with a unicorn. I find really detailed stuff, like facial expressions, hard, though.”

Twenty or 30 years ago I would have been done for. So I’ve already had an extra five years, thanks to cancer research

Over the next week, The Shop That Nearly Wasn’t hosts a series of events, including an introduction to screen-printing by Monika Crowley of the Molesworth Gallery, a reading from film and TV director Stephen Bradley, floral design workshops, yoga and wellbeing classes, and a gumshield clinic for teams and schools with two-time cancer survivor Cathy Robinson of Gumshields2Go. There will also be a hat-making workshop run by Sarah McGahon.

Opening at noon today (Tuesday, February 4th). Senator Norris – who survived liver cancer after a transplant five years ago – will cut the ribbon on the shop, which is organised by Breakthrough Cancer Research. “I wanted to help in any way I could,” he says. “Twenty or 30 years ago I would have been done for. So I’ve already had an extra five years, thanks to cancer research.

“I’m pretty good now, not bad for an old fella, says you. The operation has quite reduced my physical energy, but my mental energy is 100 per cent. And I absolutely enjoy life. It was a very long operation, but it was very well done by St Vincent’s Hospital. They were absolutely brilliant, both in the public and private wards. I even enjoyed the food.”

There are currently 190,000 cancer survivors living in Ireland, yet survival rates remain low for some cancers, such as pancreatic cancer.

One part of the shop will remain empty to highlight low survival rates for certain cancers. Breakthrough Cancer Research aims to raise €2 million this year for research and treatment development to tackle drug-resistant cancers, mirroring the progress in survival rates for cancers such as leukaemia.

“It’s all about the research,” Jess says. “Thirty years ago, most kids like Lily weren’t surviving, but kids can get through it. That can be the difference for parents – finding out that there can be a light at the end of the tunnel.”