Dil Wickremasinghe: ‘We threw out the rule book for parenting our children’ 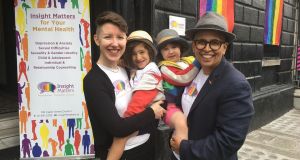 Anne Marie Toole and Dil Wickremasinghe with their children, Phoenix and Xavier.

It was a chance oversubscription at a mental health retreat that led to journalist and podcaster Dil Wickremasinghe meeting her wife, Anne Marie. “I got there, then they told me: ‘We’re really sorry, we’re oversubscribed. You have to share a room.’ And I said: ‘What, excuse me? I have never heard the likes of it.’

“I made myself a cup of tea and somebody tapped me on the shoulder and said: ‘I think we might be sharing.’ And I turned around and saw the most beautiful, stunning blue eyes and that was Anne Marie and that was it. It was meant to be. By the end of the weekend we had shared our email addresses and by the end of the month I told her I loved her and it was very quick after that.

“Anne Marie always says when we met we threw out the rule book,” Dil says, referring to the speed at which their relationship progressed. “We started talking about kids very early on because I was 37 at the time and I was very conscious that to start the ball rolling it would take at least three to four years before we would actually manage to get ourselves together to start treatment. And I was right, because I was 41 when my son was born.”

Children were not always on the cards for Dil, however, who had a strict religious upbringing. “I grew up as a Jehovah’s Witness. I experienced a tremendous amount of brainwashing in relation to the world being a cesspit and everyone’s a sinner and the only way you can save yourself, the only good people in the world, are Jehovah’s Witnesses and you can’t trust anybody. These horrible toxic messages that I’ve become aware of in the last year – I’m training to become a psychotherapist,” she explains.

“One of the last things that I was able to rid myself of was this idea that gay people shouldn’t have children because I think for the longest time I thought: ‘Okay, I may be gay, and this is who I am, but I don’t have a right to bring children into this world as a lesbian.’”

The couple are parents to two children, son Phoenix (5) and daughter Xavier (3), though Dil says she has had constant conversations about gender with her children since the start. “We have these conversations at home all the time around gender – about being gender fluid and what’s transgender, what’s non-binary. So, we always say: ‘Look, if you say you’re a boy I take your word for it, but that’s not set in stone. You can come back and tell me if you’re not sure.’ That’s all open. I’m very conscious about not defining them too by their so-called gender.”

Dil and Anne Marie each gave birth to one of their children. They attended a fertility clinic in Clane. “We went about finding a donor. We looked for a known donor. The sperm bank is in Denmark and when the children are 18, if they want to, if they so wish, they can go to Denmark and they can contact their biological father. We felt as parents we didn’t have the right to take that choice away from our children so we went for a known donor. So whatever they decide we will support them.”

Anne Marie’s family were very supportive of the couple’s decision to have a family but Dil’s parents, who threw her out of home when she came out as gay at 16, reacted “very badly”.

“I did go to Sri Lanka with my son. It was a massive opportunity to heal, to build bridges. It didn’t happen.”

Dil also had to deal with a lot of negative attention when she announced her pregnancy publicly. “It was in the run-up to the marriage referendum. I was in Newstalk at the time. I was very vocal. We didn’t plan to be pregnant during the referendum. The biggest worry around the referendum for people was, ‘Oh my gosh, if you let gay people get married they’ll end up having children and what would that look like’, because that was the big argument of the No side.

“I was in the public eye so I said: ‘Okay, you guys are worried about what gay people are going to look like having babies. Here we are. Are you scared? Does this look crazy to you?’ We really put ourselves forward. We got a lot of negative attention from the no campaign.”

Things became so bad that Dil had to involve the gardaí. “In the [radio] station my producer would walk me to the car because he was convinced something would happen. I was in such a high level of anxiety that Phoenix arrived two weeks early.

“Our first outing as a family was to the polling station to vote. So, it was beautiful but I feel quite robbed and quite angry that a lot of my pregnancy was shadowed by the negative attention I got from the No campaign.”

Dil says she and Anne Marie “threw out the rule book in relation to how we are parenting our children. We went down the route of having home births. Both myself and my wife had the same midwife.” This opened the door to what Dil describes as “alternative parenting”.

“We breastfed our children. We used the baby-led weaning method. We used the EC, which is elimination by communication, so our children were kind of potty-trained from practically the start.

“When it came to schooling we kind of looked at everything and thought I know there’s some great schools out there but we felt that mainstream school does not put the emotional wellbeing of the child first. Unfortunately, they put academics first. And we feel, working in mental health, if a child’s emotional wellbeing is nurtured first everything else will fall into place.”

Dil’s children attend a Steiner school. The average age a Steiner child learns to read is seven because the school prioritises sensory learning so, children are playing outdoors a lot of the time, she explains. “Whether it’s raining or snowing they go out. They learn through sensory, they’re touching things, they’re smelling things. They’re not reading it from a book. They’re not looking at it on a screen. There’s no technology in a Steiner school. A child’s brain develops better when they’re not put in front of a screen.”

The Steiner school’s approach to discipline is consistent with Dil’s beliefs. “There is no shaming. The teacher will say: ‘You’ve got busy hands. Let’s find something for those busy hands to do.’ There’s no ‘You’re bold, you’re bad’.”

At home Dil says “there’s absolutely no punishment. There’s no things being taken away or anything like that. We talk to our kids. We talk about our emotions.”

She explains: “When you are a child you’re testing the world. You’re testing the boundaries of your parents. You’re trying to figure things out. This is their way of learning. They’re learning about emotional boundaries. They’re not doing anything to intentionally disobey you. They’re doing it because they’re just learning.”

Dil feels strongly about homework and examinations and the stresses they cause for children and teenagers. “I remember when I was 16, I failed my Junior Cert, my O-levels, because I experienced sexual abuse when I was 12 by a teacher,” she explains. “I thought my life was over because that’s what my parents and my teacher said. In fact, my father went so far as saying: ‘You may as well kill yourself now because you’ll have no opportunities in this world because you failed your exam.’”

Starting school saw Dil’s son become very aware of other families and it meant Dil was asked a question she had perhaps not expected quite so soon, but had nonetheless prepared for.

“I’ll never forget it,” she says. “Phoenix had started in a Steiner. It was the first week. He was three years old. He came home, we were having dinner and he said: ‘Mama, Mammy, where’s my daddy?’ We had the conversations and we were prepared. He only really saw it when he was standing waiting to go into his school and he saw all the other families. We’re the only same-sex family in his school.

“I was like, ‘Oh yeah, you know how we talked about a donor? We talked about how mama and mammy, we are two women and biologically we can’t have babies so, we need the help of sperm and we had to go a fertility clinic.’ We didn’t hold anything back.

“There was a time he was sad and he was like, ‘I’m sad that I don’t have a daddy like the other kids in my class” and we would honour that. And it’s like ‘We completely understand that because you’re looking for something that you don’t have and that’s perfectly normal’ and we worked through that. We didn’t take it as an offence. We didn’t take it personally. If you were a lone parent you’d be the same. If you were adopted you’d be exactly the same.

“We march for Pride every year. They absolutely adore it. They love rainbow flags. We just celebrate what we have.”

The everyday moments meanwhile are her highs. “These are the best days of my life,” she says. “Being a parent is the best days of my life because I still can’t believe that I actually made it this far. Everything that has happened to me in my life. It’s incredible to me that I’m still alive and not only alive, I’m absolutely thriving.”