Dog DNA: Research finds they behave, age and mellow like we do 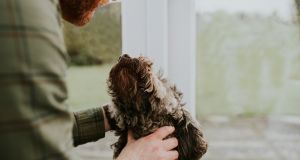 Dogs go through stages in their life, just as people do. Photograph: Getty Images.

Dogs go through stages in their life, just as people do, as is obvious to anyone who has watched their stiff-legged, white-muzzled companion rouse themselves to go for one more walk.

Poets from Homer to Pablo Neruda have taken notice. As have folk singers and storytellers. Now science is taking a turn, in the hope that research on how dogs grow and age will help us understand how humans age. And, like the poets before them, scientists are finding parallels between the two species.

Their research so far shows that dogs are similar to us in important ways, like how they act during adolescence and old age, and what happens in their DNA as they get older. They may be what scientists call a “model” for human aging, a species that we can study to learn more about how we age and perhaps how to age better.

Most recently, researchers in Vienna have found that dogs’ personalities change over time. They seem to mellow in the same way that most humans do. The most intriguing part of this study is that like people, some dogs are just born old, which is to say, relatively steady and mature, the kind of pup that just seems ready for a Mr. Rogers cardigan. “That’s professor Spot, to you, thank you, and could we be a little neater when we pour kibble into my dish?”

Mind you, the Vienna study dogs were all border collies, so I’m a little surprised that any of them were mature. That would suggest a certain calm, a willingness to tilt the head and muse that doesn’t seem to fit the breed, with its desperate desire to be constantly chasing sheep, geese, children or Frisbees.

Another recent paper came to the disturbing conclusion that the calculus of seven dog years for every human year isn’t accurate. To calculate dog years, you must now multiply the natural logarithm of a dog’s age in human years by 16 and then add 31. Is that clear? It’s actually not as hard as it sounds, as long as you have a calculator or internet access. For example the natural log of 6 is 1.8, roughly, which, multiplied by 16 is about 29, which, plus 31, is 60. OK, it’s not that easy, even with the internet.

To bring the comparisons home, the researchers compared an aging Labrador retriever to an aging Tom Hanks. They used a lab because that’s the kind of dog they studied. And they used Tom Hanks, because, well, everybody knows Tom Hanks. For most of us, of course, there is no pleasure in seeing a dog get older, but seeing even a beloved celebrity subject to the irresistible march of time is somehow reassuring. Sometime in the future the A-list may be able to purchase immortality, but not yet.

Scientists also reported recently that adolescent dogs share some of the characteristics of adolescent humans, like, say, “reduced trainability and responsiveness to commands.” Not your children, of course, but those of other parents. However, teenage dogs don’t torment their actual mothers. They complain to their humans. That means a double whammy for some pet owners. If you happen to have adolescent human children as well as adolescent dogs and you all are stuck at home in close proximity because of a worldwide coronavirus pandemic, then all I can say is more research is required.

Perhaps I shouldn’t be flippant about these research projects. They involve some groundbreaking work and could have potentially important conclusions. Take that paper with the natural logarithms, for example. To come to those conclusions researchers sought patterns of chemical changes in DNA, a process called methylation that doesn’t alter the content of genes but does change how active they are.

Lab tests can tell how old a human is just from the pattern of methylation. Thanks to this research, the same can be done for dogs. The results will help researchers studying aging in dogs to translate findings to humans. None of this research was done on dogs kept in a laboratory. All of the dogs in the aging comparison study were pet Labrador retrievers, and the owners gave permission for blood samples.

Scientists are unsure about whether the physical decline seen in aging in dogs and humans, in fact in all mammals, is related to the process of development in earlier life or whether the decline is a different process altogether. The researchers found that the pattern of methylation suggested that the same genes may be involved in both processes.

Good methods of comparing dog and human ages are important. Dogs are increasingly seen as good models for human aging because they suffer from it in many of the same ways humans do. As the Dog Aging Project, which is collecting genetic and other information from a vast number of pet dogs, puts it on its website, the goal of the research is “Longer, healthier lives for all dogs and their humans.”

The DNA of dogs

As an aging human, I can’t fault that approach. In, 2018 the co-director of the project, Daniel. E. L. Promislow at the University of Washington, Seattle, laid out the reasons dogs make a good animal in which to study aging and get results that will help people. In essence, they suffer a lot of similar ailments, such as “obesity, arthritis, hypothyroidism, and diabetes.” That’s not all of course, but when we imagine that an old dog walks funny for the same reasons we do (it hurts), we’re not being anthropomorphic.

Elinor Karlsson at the Broad Institute described her research in genomics and dogs: “One of the things that we’re really interested in is figuring out, first of all, whether there are things in the DNA of dogs that you can find that actually explain why some of them live a remarkably long time.” Those findings might be of use in extending healthy aging in people.

The study on the changes in dog personality over time used border collies that were part of the Clever Dog Project at the University of Vienna. The border collies were all companions, volunteered by their human owners. Humans are said to grow more easygoing, stable and agreeable as they age. We can all think of exceptions, probably in our own family, but overall statistics cannot predict the behaviour of outliers like Uncle Rasputin or Aunt Ratchet.

How do you test dog personality? The border collies were put through many different tests. In one, a stranger walks into a room and pets the dog. In another, the owners dress up their dogs in human T-shirts. One-fifth of the dog owners admitted to having done this before, on their own, not for research purposes. In another test, the owners dangle a sausage in front of their dogs just out of reach for a minute or so. Be assured this was approved by an ethics board, and the dogs were fed the sausages once the time was up.

The researchers found that dogs do change as they grow older just as people do. They become less active and less anxious. But one of the authors of the study, Borbalu Turcsan, of Eötvös Loránd University in Budapest, Hungary, noted that some dogs don’t change as much over time. “People with more mature personality profiles change less as they age,” she said. “And we found exactly the same in the case of dogs.”

The end of aging is of course the same in dog and human. Dogs just get there more quickly. This is one thing that makes the dog a “good model for human aging and mortality,” as Promislow wrote. “Dogs age a lot faster than people do,” Karlsson of the Broad Institute explained. “And so if you want to study aging with the idea that you want to help people within our life span, then you want to be able to study something that’s aging much faster than us. You can learn about it more quickly than waiting 80 years until somebody dies.”

On this point, of course, what is a benefit for science is a great sadness for dog lovers. Dogs die too soon. And it is left to us to witness it, time and again. It’s never easy. As one version of the folk song, “Old Blue,” has it, “Old Blue died and he died so hard, shook the ground in my back yard.”

Here, where the consolations of science fail us, poetry can remind us of what it is about dogs that makes us face the shortness of their lives. In, “A Dog Has Died,” Pablo Neruda describes his dog, in younger days, at the beach: Joyful, joyful, joyful, as only dogs know how to be happy with only the autonomy of their shameless spirit.