Doctor and former Rose of Tralee Elysha Brennan: ‘I thought I would die from my illness’

Former Rose of Tralee Dr Elysha Brennan, having overcome two serious health scares, has graduated first from her medical class out of more than 300 students in the Royal College of Surgeons in Ireland (RCSI). Video: Ronan McGreevy 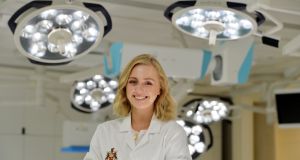 Elysha Brennan at the Royal College of Surgeons in Ireland: ‘I’m in such a blessed position because I know what it is like to have it all taken away from you.’ Photograph: Alan Betson

In October 2016 medical student Elysha Brennan was diagnosed with ulcerative colitis, a debilitating condition which led to her hospitalisation for 10 days.

It is an autoimmune condition which attacks the bacteria and the microflora in the bowel. The effects, as she graphically recounted in a blog post at the time, are overwhelming – severe stomach ache, loss of blood, weight loss and extreme mental fatigue.

The cumulative effect of chemotherapy she received having been diagnosed with the cancer Hodgkin’s lymphoma, in 2012, was a factor in her developing colitis.

Just 23 at the time, she believed there was something fundamentally wrong with her to be diagnosed with two such serious conditions at such a young age. She ended up in hospital for 10 days and for a further 2½ weeks in February 2017.

“That second hospital admission was the one and only time I said that I thought my body couldn’t take it. I didn’t think I would see the other side of it,” she recalls.

“There was one night in particular and I asked the doctor: ‘Is this it? Am I going to die?’ I was septic and I was shaking. Everyone was around me. I thought, ‘This isn’t good.’”

She was discharged on February 11th, 2017, the day of her 24th birthday and resumed her medical studies at the Royal College of Surgeons in Ireland (RCSI).

Seven years after she was diagnosed with Hodgkin’s lymphoma, Dr Brennan, as she will now be called, this week graduated top of her class out of more than 300 students at the RCSI.

Being first was noteworthy in itself; doing it having faced two life-threatening illnesses was something else.

“Her resilience was never more evident as when I visited her in hospital when she faced a serious illness during her studies,” said Prof Arnold Hill, the RCSI’s head of the school of medicine.

“She had her books around her on her hospital bed while on a drip, studying for an upcoming exam that she was determined not to miss.”

Now 26, she was – marginally – the oldest undergraduate in the class. She sat the Leaving Cert in 2011 at Gormanston College near her home in Bettystown, Co Meath, but fell short of the points to study medicine. “I had a bit too much fun,” she recalled.

She was repeating her Leaving Cert in Leeson Street when she was diagnosed with Hodgkin’s lymphoma in May 2012 two weeks before she was due to sit her repeat exams. She assumed the lump on her neck was down to the stress of preparing for exams.

She did the Leaving Cert anyway. She got into medical school, deferred the year to allow for her ultimately successful treatment and entered the RCSI in September 2013 at the age of 20.

The public know her best as the 2015 International Rose of Tralee, another diversion on her way to graduation as she took a year off.

“I find myself to this day defending the festival. I remember meeting somebody at a selection and she said, ‘When you start working, don’t bring up the Rose of Tralee. It’s a negative stigma that has followed me around’, but it’s been such a positive experience and I’m really proud of it. I have seen how it empowers young women,” she said.

“I travelled the world: India, Africa, all around Europe, the Middle East. It shaped me as a person. I really needed to take that year out to grow and develop.”

Dr Brennan puts her success down to long hours of study at home in Bettystown from 8am to 10pm in preparation for exams punctuated by relaxing with watching episodes of Grey’s Anatomy.

“I’m in such a blessed position because I know what it is like to have it all taken away from you,” she said. “I have worked tooth and nail to get my degree. It’s been my fighting determination that I’m going to make the best of all the time I am well.”

She now plans to become a paediatrician.