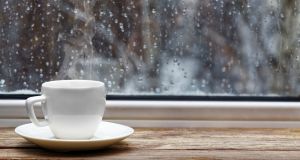 I cannot remember the last time I had a cup of tea brought to me in bed.

It was one of those days when stress and exhaustion make everything wrong. Everything. It was raining. Again. I like to have my first mug of tea of the day in the garden during the summer. It is supposed to be summer now – not that you would know it if you lived in West Yorkshire. I stood, mug in hand, staring out moodily at the garden. The steam from my tea was attempting to obscure the rain drops running down the window.

I had forgotten to buy bread. No toast with my tea. Wonderful. The dogs gazed at me expectantly, hoping for their breakfast. I was in two minds about giving it to them. If I had to be hungry, why would they not want to show solidarity and forgo breakfast too? I knew that was a non-starter. I heard them scoffing as I drank my second mug of tea at my post by the window. The sky was leaden.

Tony was snoring in bed. In the silence I could hear him – making me more cross. I cannot remember the last time I had a cup of tea brought to me in bed. He is not allowed to use the kettle any more – it’s far too dangerous – so it is not Tony’s fault. But it is, really. He should be with me, trying to make me feel better instead of being snuggled under the duvet oblivious to my dark mood and the rain.

I was feeling mean. I should have taken the dogs out for a long walk, but I did not have the energy and neither did I want to get soaking wet.

I did get very wet helping Tony to have a shower. I have no idea how he gets so much water everywhere. Our plumber, Henry, is deeply impressed by Tony’s ability to cascade water from the top of the wall. Maybe I should wear my swimsuit, rather than endure a daily soaking. When we had the bathroom refitted I did think about a wet room, but for various reasons this was not feasible.

On this particular day I made my feelings known about being soaked yet again. Tony’s dementia is at the stage when more or less everything is confusing. He had no idea what was wrong with me, and that maddened me even more. I yelled at him that I was no longer going to accept his dementia as an excuse. He had better understand I really, really had, had enough.

I put Tony’s clothes out for him in the right order and he dressed himself. He came down with his sweater tucked into his trousers. For goodness sake, he looked like he had escaped from an institution. I said this to him, but he stood there, not understanding. He had picked up on my foul mood, but did not know what to do.

This was the moment a decent person would have calmed down. I could not be that decent person. I just looked at him. He pulled his sweater out of his trousers, asking me if this was what I wanted. I ignored him and went upstairs to sort out washing.

I went into the kitchen to top up my tea and returned in time to see Tony giving a piece of a sandwich to the dogs. That was my point of absolute meltdown. I grabbed his plate and threw the food on the floor. (Fortunately, it is tiles rather than carpet.) I have never done anything like that before. I shocked myself, but by then I was on a roll of righteous fury.

Tony looked nonplussed. I pointed out I had saved him the hassle of passing it bit by bit to the dogs. The dogs, of course, were desperate to get to the food, but they were more worried about my mood.

They did not dare move even though sandwiches and crisps were littered in front of them. Tony and the dogs stared at me. Well, they could stare all they liked because I was going out.

When I returned, Tony who had been asleep in the armchair, woke up immediately. Getting up he came over to hold and hug me tight. He said he did not know what he had done, but he was sorry. Stroking my hair, Tony told me how much he loved me. Of course, he had not done anything wrong. It was and is his illness driving me to despair.

That was when I started to sob – releasing some of my overwhelming misery and unarticulated grief.