Be yourself? Nah, fake it till you make it

Padraig O’Morain: Being yourself is tricky when you don’t know which ‘self’ to be 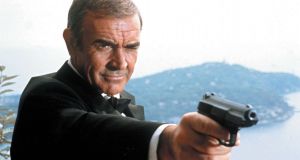 “If you are shy and awkward, being yourself doesn’t sound like the best idea. You’d rather be suave and sophisticated like, say, Sean Connery’s James Bond.” Photograph: Warner Bros

“Be yourself” is advice that has always puzzled me. I first read it back in the Stone Age when, like another half a million people or so, I read Angela Macnamara’s weekly advice column in the Sunday Press. Her column answered readers’ question on love, sex, shyness, anger, marriage and more.

Among those who wrote to her were shy and awkward (I qualified) teenage boys seeking advice on how to talk to those terrifying creatures, girls.

That’s where I read that in order to survive in these situations you need to “be yourself”.

I didn’t know that and anyway, even if I managed to be myself, which self should I be? This isn’t a conversation I had with myself at the time but it’s one I’ve wondered about since. Should I be the studious self, the lazy self, the friendly self, the sarcastic self to name but four? I have been all of these and more.

I thought of this again when I read recently of research into successful job interviews. The report in Science Daily said that “being yourself may be the best way to secure a job offer”.

Ever managed to be yourself at a job interview? Me neither. I recall many embarrassing job interviews and also many that went well. But one stands out because I flowed through it on a wave of confidence. I entertained, impressed and enthralled the room. Here’s the problem though: that wasn’t me being myself – it was me being somebody who was most definitely not my “self” and I have no idea where that very impressive performer came from.

When I went down through the Science Daily report I read that it isn’t as simple as being yourself anyway. Poorer quality candidates “can actually damage their chances of being offered the job by being more authentic,” said one of the researchers.

Indeed, when I used to sit on interview panels I normally became mildly depressed after a few days because the candidates seemed so much better suited for the job than myself. I only cheered up when I realised they were all “putting their best foot forward”, otherwise known as “making it up”.

I have since come to the conclusion that most of us go through life wanting people to like the self we present to them at the time. When you are “on your best behaviour” you present one version of yourself. When you “lose it completely” you present another.

The smiling, polite, well-scrubbed corporate clone nibbling a Hobnob and sipping tea during at break at a conference could be a sleazy Twitter troll in the early hours of the morning; the very model of a caring, good -humoured citizen on Facebook; and a resentful boy when his mother tells him to polish his shoes.

Sometimes, unfortunately, we cannot predict with any confidence which particular self is going to emerge.

The other week I arrived at a very friendly party made up of people in the publishing business. I knew I wouldn’t know anybody there but neither did lots of other people so it shouldn’t matter.

But as soon as I walked in, the shy and awkward teenager was back in full force and I knew I would’t be sticking around for long. Everybody was very friendly but the confident self who could have handled the whole thing with flair refused to come out to play, preferring to take a stroll in St Stephen’s Green while waiting for me to escape and join him, which I did.

Where does all this leave us? Perhaps with the very opposite of “be yourself”.

I refer to that wise advice, “Fake it till you make it.”

Padraig O’Morain (pomorain@yahoo.com) is accredited by the Irish Association for Counselling and Psychotherapy. His latest book is Mindfulness for Worriers. His daily mindfulness  reminder is free by email.