Reducing stress for girls: lessons from a parenting master 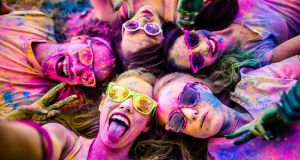 Social media doesn’t help reduce stress in girls, and needs to be kept in bounds because it’s often a cruel place

Leaving Cert stress, peer pressure, snapchat and fidget spinners – Irish young people are bombarded with stressors that make us wish for The Waltons’ era. Australian international parenting guru Steve Biddulph says the growth of social media has compounded anxiety and stress for young people and led to the marked plunge in mental health among teens in the western world.

Raising Girls: Helping Your Daughter to Grow Up Wise, Warm and Strong is a response to a world that is tougher than ever on young people – and girls in particular.

Biddulph says the mental health problems we are seeing among young people are “pretty much the same as they are all across the post-industrial world”.

“Of course, economic stress makes it worse, as parents are stressed too, which children feel acutely. But even affluent and financially secure young people are also suffering, so that is not the only factor,” he says.

Social media is often a cruel place. But the causes lie deeper than even that

Ireland has the fourth highest rate of suicide among teens in the EU, with only Lithuania, Estonia and Finland experiencing higher rates.

“Ireland has very capable experts on youth suicide and I’d be reluctant to comment from the other side of the world. But here is what we know from my country and the international picture.

“Economic hard times do contribute, but are rarely the sole cause. Social media doesn’t help, and needs to be kept in bounds because it’s often a cruel place. But the causes lie deeper than even that,” he says.

“For a young person to take their own life, two things have to happen. They have to feel that life is too hard to endure, and they have to feel terribly alone, which sadly is possible even when those around you love you deeply. We’ve created the conditions where both those things happen way too often. We haven’t wrapped enough concern and support around young people, especially in the wider community,” he says.

Biddulph says in writing his book, he took the key ingredients of resilient mental health and made them practical: “Our communities are essentially too fragmented and disengaged. So, the first thing was to have young parents feeling supported and not rushed. So we have to take care – both governmentally and in our own communities – of young families.

Financial and housing support, of course, but also we their neighbours helping with meals, baby-sitting, second-hand baby needs, just being supportive and friendly to those young couples in our streets and neighbourhoods. If they feel safe, then their babies develop a lifelong sense of security,” he says.

Biddulph has firm ideas on school starting age, and says the later children start, the better.

“We have to protect childhood, so not start school too young, but have play opportunities, kindergartens where there is no pressure or evaluation, no testing, no formal learning.

“So that girls especially can be noisy, messy, free, and not turned into good little girls who please with neat work. And boys have time to mature developmentally before they are forced to learn,” he says.

While stressing the the importance of fathers on young girls’ lives, Biddulph says young girls need firm older female role models that aren’t their mother or in their peer group, who they can go to without feeling judged.

He says if you want your daughter to grow up “strong and free” you need to start early to bolster her security, sense of self and happiness.

“In girls’ lives it’s protective to have dads, or surrogate dads, who play with them, are warm and kind, and don’t hit or shout, or mistreat their mum. In the teen years we need aunties or auntie figures who supplement what parents can give, and talk sense and wisdom to girls, so the peer group is not their default for their self-worth.

“We need schools that are fun and relaxed warm places, with less testing, pressure or rush, where girls can discover interests and passions that make life feel worthwhile.

“We have to make sure that dads learn how to be affectionate, engaged, and kind, funny, and also strong in the sense of being reliable, showing up, someone you can count on. That doesn’t need finances, in fact some studies show a career dad is often less available as a parent, that it is his time that matters to kids, not his wallet,” he says.

Girls need less pressure to conform, less worry about looks or being decorative for males

“Aunties turn out to be very important in girls coming through adolescence safely, as they provide someone straight talking, who loves you, and are less embarrassing than mum to tell things to. Every girl needs an auntie or auntie substitute,” he says.

Biddulph says the world is tough on girls as they face increasing pressures to be “decorative for males”, which is heightened by the use of social media.

“We need to teach girls how to self-value, know about the pressures from boys and the online world, and feel they don’t have to ‘fit in’ – that they can be different on the spectrum – gay, interested in non-traditional, or very traditional, things and be themselves. They need less pressure to conform, less worry about looks or being decorative for males,” he says.

So how are we to help a generation of girls and indeed boys who have grown up online and tie their self-worth up in the amount of snapchat friends and likes on their Instagram selfie? While we can’t take phones off kids or expect them to shun the internet, Biddulph says kids need a break from the internet to be themselves, play and relax.

“Less engagement with social media, having parents who provide some boundaries, where the whole family leaves their online devices or phones on the charger from seven o’clock every night, so they can leave the stresses of the playground and world behind. Fewer TVs blaring the horrors of the world across the space where children play, and where conversations can happen. Only turning on TV for specific shows, not having it just going on in the background,” he says.

“New research is showing that nature, being in the open air, even having a pet dog or cat, growing plants or food gardening, helps to soothe and develop a sense of peace, and eventually, of spirituality and belonging in the world. This strengthens and liberate girls – in fact all young people.

“Mums and dads who are part of their community and bridge them to interests, sports, hobbies, arts and music, so that kids feel they really do have a village. I think that in Ireland you do these things rather well, and just need to get back to that, even in urban environs, to build back community strength. None of us can raise kids alone.”

‘I couldn’t afford to live in Dublin, the city of my birth’
7

I would say to anyone thinking of returning to Ireland: look beyond Dublin
10