Daddy, dementia and me: Safe in a world without coronavirus

Daddy’s degenerated brain could not process this pandemic, and why should it? 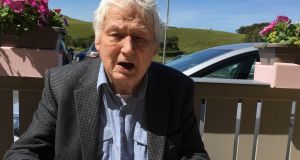 George Ryan is a member of a WhatsApp group now, whether he likes it or not.

Daddy sent me a video message from his nursing home the other day. He told me he loved me very much and hoped I was happy with “the picture”.

He looked more serious than Leo Varadkar did during his state of the nation speech on Paddy’s Day.

Not a bad feat since, like many of those with dementia across the country in nursing homes, hospitals and their own homes, he hasn’t a clue about what’s going on here in the outside world.

I can only imagine the cajoling his carers had to do to entice him to engage in this social media exercise. George doesn’t exactly capitulate to anything without some colourful verbal resistance.

Well, he is a member of a WhatsApp group now, whether he likes it or not. And I’ve just sent him a video of his five-month-old great-granddaughter, Ada, being held aloft by her daddy and doing all sorts of fancy footwork to the uplifting tune of Riverdance, encouraged by Aisling, her mother.

Like George, Ada is oblivious to the unfolding health crisis. Hopefully, it will be just something her parents tell her about in the future, just like his parents talked about the Spanish Flu of 1918.

All I’d be doing is confusing him, causing him stress which his degenerated brain and dodgy heart could not process

Of course, these are different times. We are such an affluent country now with so many economic and medical resources to fight a pandemic in comparison to our forebears. Not only have we nutrition, sanitation and a sophisticated health service, we also have myriad ways to communicate when in solitary or isolated situations.

Isn’t it ironic that the much-maligned social media will save those of us living alone from cracking up? It is weeks since I interacted in a normal way with another human being.

I know Daddy would have a good chuckle at my “Alcatraz Vlog”. I’m sending it to family and some long-suffering friends in order to still feel a tactility with the outside world.

I’d love to send him the one in which I say I’ll bring all the logs up from the bottom of my garden to the back of the house and then – if necessary – bring them back down again. No mean feat since the garden is on an incline and the size of a field that could do with some TLC.

I’d love to tell him about the video I made about escaping from solitary confinement by bribing my guards with poitín and heading off to my favourite beach really early on the morning of Mother’s Day. I’d explain that I brought a flask of coffee, the box of heart-shaped chocolates the princesses had sent and my Uzi machine gun lest anyone came within a two-metre distance of me.

He would be really interested in the fact that my sister Breda and hubby Mick spent a night lately in their camper van overlooking a Normandy beach with its second World War ramparts as they tried to get a ferry home from a cut-short skiing holiday.

He’d have a good laugh at how I “self-isolated” my debit card for three days after it went two cents over the €30 limit, scuppering a contactless payment when I finally braved my way to a garage to get petrol.

But then I’d have to explain the coronavirus context and why would I do that?

All I’d be doing is confusing him, causing him stress which his degenerated brain and dodgy heart could not process.

Instead I’m gong to send him a picture of the two pet robins I have adopted. I’ve christened them Randolph and Rowena. They wait on a table outside my living room every morning until I bring them out a muesli of sesame and sunflower seeds.They are way too busy to be worrying about pandemics as they build their nests. In the evenings, if there is even a sliver of sunshine, they congregate in the treetops and join in the most musical choruses.

Full of hope, just like the Italians we have been watching sing and play music from their balconies.

I started the ‘gender reveal’ party trend, and I regret it
7