My teen daughter has become really anxious about climate change 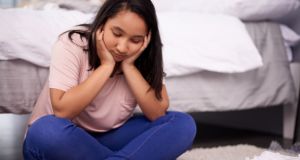 Trying to reassure an anxious teenager is hard enough, but when they are worried about a serious and real issue, it is much harder. Photograph: iStock

Problem: My 14-year-old daughter has become really anxious about climate change. She has been following the news coverage about Extinction Rebellion and the school strikes, and is waking at night worried that the world is going to end.

I try to reassure her that she is over-reacting but she argues back with loads of facts about biodiversity loss, super hurricane and the melting ice in the Arctic. It is impossible to reason with or reassure her.

She is very well-read on the subject and follows all the news articles etc. I have tried to ban her from watching bad news, but that appears futile, as she goes online. Also she is accusing me of being a denier and control freak. Also, she is getting too old for me to be censoring her news feed. I try to tell her that as her father I am worried about her, but she is not listening to me. We seem to be rowing all the time.

What can I do?

By the way, I am worried a lot about the issues she raises as well, but am at sea as to what to do.

Answer: Trying to reassure an anxious teenager is hard enough, but when they are worried about a serious and real issue such as climate change, it is much harder. With the publicity around Extinction Rebellion and a string of damming scientific reports, the long-established facts about climate change have been gaining more attention in the media. The serious consequences for the future of the natural world and human society as a whole are beginning to dawn on the public. Any sensitive person who seriously thinks about the issues is likely to become fearful and anxious. This includes young people like your daughter, who naturally have a big stake in the future. In my clinical practice, I have noticed a big increase in anxiety among young people about climate breakdown and he state of the world more generally.

Accept her worries as real

While your intention to reassure your daughter is to genuinely help her, it may come across as dismissal or that you are not listening. As a teenager this is likely to increase your daughter’s argument with you and potentially drive a wedge between you. Instead, I would suggest that you take a step back and listen. Don’t argue back or reason with her and instead accept her worries as real and encourage her to tell you about them. Young people are often better-informed than their parents on these issues, so take a step back and let her educate you. Listening and taking your daughter’s views seriously will take the battle out of the conversation with her.

As well as discussing the facts, attend to her feelings. Acknowledge her feelings of anxiety and worry and how understandable they are – “I understand how you must be scared when you think like that” or “lots of people are so worried now that it is keeping them up at night”. Share also your own worries, too, and if you feel the same way – “I worry too about what is happening”. Helping your daughter feel heard and understood will make a difference.

Explore what action she can take

The antidote to worry is taking action. Explore with your daughter what constructive action she can take to address her worries. Help her channel her “worrying energy” into actions that can make a difference. This might mean personal actions such as reducing the family carbon footprint or community actions such as taking part in the Tidy Towns initiative or political actions such as joining a youth campaigning organisation or writing to politicians. If she is worried about nature she could become a member of national conservation groups such as Native Woodland Trust, Irish Wildlife Trust or Birdwatch Ireland. As well as addressing the issues, helping your daughter get involved in positive actions will have lots of benefits for her personally, whether this is the benefit of reaching out and meeting like-minded young people or the mental-health benefits of outdoor activities and connecting with nature.

You could also join her in some of these actions or indeed set family goals around becoming more resilient and living greener lifestyles. Joining her in action is a great opportunity to bond and to have fun together.

Help your daughter also learn to switch off and focus on her own wellbeing. Explain that there are no benefits to her sleep being disturbed by her worries and explore ways she can regain her sleep at night. There are many different strategies that you can suggest she tries, such as having a notebook by the bed to jot down the worries that wake her at night and then listening to a mindfulness app to help her return to sleep. Creating relaxing evening routines, eating well and getting enough exercise will all help as well. Do seek more support if her night anxiety and worries continue.