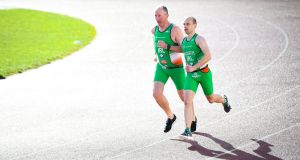 If you don’t know Donnacha McCarthy as one of Ireland’s brightest triathletes, you may know him and his dog, Aero, from the Irish Guide Dogs advert. Remarkably, McCarthy is a blind triathlete who shot on to the international stage a couple of years ago and has plans to represent Ireland at the Tokyo Paralympics later this year.

McCarthy battled leukaemia when he was a child and, as a result, lost his sight when he was 10 years old, changing everything for this farm kid from Co Cork. But how did he get from that point to planning for Tokyo?

How did you get into sport?

“I grew up on a family farm in west Cork, so I would have always been active. My earliest memories of being active, and it wouldn’t necessarily be a sport, although it probably should be, are running after cattle and sheep to move them through fields on the farm.

“My national school head teacher, Dan Daly, who has since passed, would have been a huge advocate of sports and promoted sport and physical education in school. We always had dedicated time to play soccer, football or whatever sport in school. I was always quite competitive back then – even though I was probably in first or second class and was playing with the guys in fifth and sixth class, I just absolutely loved what I was doing. I also joined my local GAA club, Drimoleague, and played under-10 or 12 football, obviously before I lost my sight.

“We trained once a week and I remember on Saturday mornings I would always have to get up early and go up and help my parents on the farm and then try to escape down the backfields halfway through the chores to get down and get changed and run down the road to be on time for football.”

Was there a time you nearly gave up sport and who encouraged you to keep going?

“When I lost my sight that was the moment I gave up doing sports. I was 10 years old and it was a huge change in my life. It’s kind of hard to put it into words really, I would say it was almost like depression because I went back to national school and I was still friends with the guys I was friends with before I lost my sight but I felt cut away from them because they were still going out and playing sport at lunchtime in school and I wasn’t able to join in with them. I felt very cut off from my friends because that’s how we socialised down in west Cork.

“It put me off sport completely because I couldn’t imagine how I was ever going to be able to play sport not being able to see. I’d never heard of Paralympics or para sport or visually-impaired sport, I just assumed that after I lost my sight sport wasn’t going to be part of my life any more.

“One of the first memories of me getting active again was my sister putting me on her bike and me peddling on the roads down home while she ran ahead of me giving me directions. It was just great to be active again and to get that feeling you get from exercise, the endorphins I suppose. My headmaster was really good as well, he still got me involved in sport where he could, he would always try to come up with games where he could include me to some degree and I think that was really important putting me on the first step to getting back into sport.

“I started working with Vodafone back in 2013 and they were sponsors of Triathlon Ireland at the time and there was a lot of talk about triathlon around the company then. A few of the guys who I worked with tried to encourage me to do one, but I thought no way, I can’t even swim, why would they think I could do triathlon. I just thought the whole sport was crazy, to be honest. One of the guys took me out running with him at lunchtime. Neither of us had a clue what we were doing, we were just experimenting with what worked guiding-wise and tether-wise. We had a few close calls with lamp posts and cars and all sorts of things. I loved it and the competitive side of me started to come out again and I did a few 5km and 10km races.

“In 2015 a friend in work was being coached by triathlon coach Eamonn Tilley and she mentioned they were hosting a paratriathlon talent day. He’d mentioned to her I should go along so I did. I thought it would be nice to improve my running and maybe do a few duathlons if I got a tandem bike. Eamonn said that was grand but to come along to the pool anyway and he’d throw me in and see how I got on.

“Once I get my mind set on something I’ll just keep hammering away at it until I eventually crack it and that was what swimming was for me. I didn’t know what would break first, it or me, to be quite honest – there were several times I nearly threw in the towel. But I was very lucky to be teamed up with Dave Tilley, Eamonn’s brother, as a guide when I started out and he was determined to get me swimming. Having him pushing me on days I didn’t want to be pushed was huge in terms of getting me to crack the swimming. It was like having my own triathlon mentor and he taught me everything he knew. I think it was fitting he did my first races with me and we got my first international medal together.”

What advice do you have for young people getting into sport?

“Try everything that you can get involved in. That was definitely the case for me. I had a go at everything really when I was growing up. I tried my hand at a few visually-impaired sports before I settled on triathlon. Ultimately it just comes down to doing something I really enjoy doing, that’s what keeps me motivated. I love the training and the people I’m involved with as well.”