Adrenalin-pumping rock climbing can help combat depression, and gets you fit 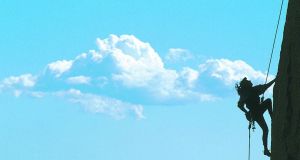 “However, it is very important to state that if anyone is on prescribed medication they must adhere to their medication and use exercise as an adjunct,” says Dr Julie Broderick of Trinity College Dublin

Rock climbing is not for the faint hearted. The adrenalin-pumping activity requires participants to be in peak condition both mentally and physically as they use their wit and strength to scale the heights.

But while the sport may require a lot of input, it is not only beneficial to heart and body but a new study has also revealed that climbing can help to relieve the symptoms of depression.

Researchers from the University of Arizona have found that the combination of concentration, willpower and the social aspect of climbing reduces mental health symptoms from moderate to mild.

Author of the study, Eva-Maria Stelzer, says the reason climbing is beneficial is down to the fact that participants have to be “mindful and focused on the moment”.

“It does not leave much room to let your mind wander on things that may be going on in your life – you have to focus on not falling,” she adds.

Andree Walkin (37) is the occupation marketing manager for UL Sport Adventure Centre in Killaloe, Co Clare. She has been climbing for 18 years and while she doesn’t suffer from depression, says the activity always helps to improve her mood.

“I think the US study sounds very interesting and I agree with the findings,” she says. “I love the feeling of achievement after scaling a climb and the uplifting mood and sense of pride and accomplishment it gives me afterwards.

“I am a serious advocate of the great outdoors and the mood-lifting power it can have. I have also seen first-hand the positive effect an outdoor sport like climbing or hiking can have on someone’s mental health and overall well-being.”

Dr Julie Broderick, assistant professor in the department of physiotherapy at Trinity College Dublin, agrees and says research has proven that activities such as rock climbing can be hugely beneficial for people with mental health issues.

“Climbing provides social interaction which is important to combat isolation that people often experience when depressed,” she says. “There is an element of commitment to the task and forward planning which can help if you are tempted to change your mind.

For people with mild-to-moderate depression, exercise has been shown to be as effective as pharmacological therapy

“Exercise [in general] has been shown to decrease symptoms of depression regardless of the intensity of activity undertaken – and has been recommended as a core component of usual care in people with depression as it can improve symptoms and quality of life.

“In fact, a recent large Cochrane review stated that for people with mild-to-moderate depression, exercise has been shown to be as effective as pharmacological therapy. However, it is very important to state that if anyone is on prescribed medication they must adhere to their medication and use exercise as an adjunct.”

The World Health Organisation (WHO) estimates that depression will be the top cause of the global disease burden by 2030. And those with major mental illness, such a schizophrenia, bipolar disease and major depression, have an increased risk of cardiovascular disease and subsequent shorter life expectancy.

Physiotherapist Alice Waugh says the reasons for this are multifactorial (including genetic risk factors) but there are several lifestyle habits that are “modifiable” risk factors such as a sedentary lifestyle which should be targeted.

“There are no specific exercise guidelines for people suffering from depression, but the general advice of at least 30 minutes of moderate intensity exercise five days a week, with two days of strength training, should be the goal,” she says.

“If someone is finding it difficult to motivate themselves, exercising with a friend can be a good way to start. Finding something that you enjoy is also important to make sure you continue to exercise. This can include a wide variety of activities such as walking, dancing, housework, swimming, cycling, as well as gym classes such as aerobics.

“But if you are planning on taking up rock climbing, weight training is essential as the sport requires you to hold your own body weight.”

Dr Broderick agrees and says it is important to prepare properly for an activity like rock climbing as it isn’t something which can be achieved overnight.

“When beginning a new activity, try not to overdo it at the start, but build up slowly,” she advises. “It will take your body time to get used to the new pursuit and you may experience delayed onset muscle soreness. It is also important to realise that an activity such as rock climbing requires skill, so make a mental commitment to plan ahead.”

Waugh says exercise has many benefits such as increasing energy levels and fitness, decreasing stress and anxiety, improving heart and lung fitness, improving joint mobility and muscle strength as well as helping to regulate body weight and blood pressure and improving confidence and sleep patterns.

And the Dublin-based expert has some advice on how to get started.

“Setting a goal is a fantastic way to motivate yourself,” she says. “This may include a few small steps which are easily achieved such as a daily walk at lunch time. A larger goal such as climbing a mountain will require preparation and planning. But you need to make sure you are training your body for the goal ahead and setting a routine that prepare you mentally for the task. The best way to do this is to practise the activity and incrementally build up to your goal.”

How to start a new exercise routine

People who are just beginning to exercise should incorporate exercise slowly.

Maintaining a good exercise routine can be hard. So rather than focusing on how often or how long you exercise, trying to incorporate exercise into your daily routine can be a good start.

By sitting for more than seven hours a day, you significantly increase your risk of premature mortality, so taking breaks, getting up and moving about can reduce your risk.

Incorporate exercise into your life by including a 10 minute walk at lunch time or after work, getting off the bus a stop earlier or introducing a swim once a week. This can then be built up to longer bouts of exercise more regularly.

A new exercise regime will become easier once you get into the routine and start to feel the many benefits.

The main goal is to exercise regularly, and this is more achievable if you are doing something you enjoy.

Elliot Dallen died last week. This was the final article he wrote
9