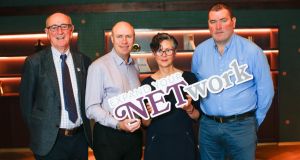 It was the type of cancer that killed Apple co-founder Steve Jobs in 2011 and American soul singer Aretha Franklin in 2018.

It’s the cancer that RTÉ journalist, Tommie Gorman has been living with for more than 20 years, yet neuroendocrine tumours (NETs) are still not widely known cancers.

Often misdiagnosed or not diagnosed at all for several years, these rare cancers are often called the quiet cancers.

A small group of NET patients are now keen to speak out about their condition so that doctors begin to consider that common symptoms such as severe indigestion and heartburn and diarrhoea might be something more complex.

Andrea Martin (59) suffered episodes of extreme indigestion for several years before she realised she had a neuroendocrine tumour.

“I had gastric pain, ongoing indigestion, heartburn and nausea. I had a gastroscopy [internal investigation of the stomach] and an ultrasound but nothing was detected,” she explains.

One evening following an acute bout of pain, her sister insisted on bringing her to the A&E department of St Vincent’s University Hospital. “I had a CT scan which identified a seven centimetre tumour on the tail of my pancreas. I was very lucky because the surgeon on duty was an expert in NETs and he had a sense that my cancer was different from the usual pancreatic tumours. He organised more tests and a biopsy which confirmed that I had a slow-growing NET,” she explains.

Three months later in August, 2015, Martin had surgery to remove the tumour. “I prepared well for the surgery. I got fitter. I ate well, slept well and took a lot of rest. In fact, I felt so well, I considered not having the surgery – which I later realised was a panic reaction,” says Martin.

She says that her post-operative recovery was good and she was back working in her job as a media lawyer in October, 2015. “I did Tai Chi for a while afterwards and then eased myself back into Pilates. I have to watch my intake of alcohol and sugar because part of my pancreas was removed but other than that, I’m fine,” she says.

Martin says that while there is a risk of the cancer coming back, she feels confident it will be treatable. “I’m in the system now. I’m checked every year and if it re-occurs it will be picked up quickly and there is a range of treatments.”

Mark McDonnell (53) went for a medical check-up before starting a new job in 2002. That check up revealed that his liver wasn’t working properly and he was told to exercise more and eat and drink more healthily.

Eight years later, he went to the doctor with a pain in his toe and mentioned his liver condition. An ultrasound revealed several tumours in his liver. His oncologist recommended a “wait and see” approach but sent him to NET specialist, Dr Dermot O’Toole in St Vincent’s University Hospital for a second opinion.

A NETs diagnosis was made and McDonnell had over 65 per cent of his liver removed in two different operations, eight weeks apart.

“The primary NET was discovered in my small bowel and I was put on somatostatin analogues [hormone inhibiting drugs] for one year. I couldn’t tolerate the medication so I came off them and haven’t take medication since,” explains McDonnell.

“I went through all the mental anguish about having a cancer and thinking that I would die. Our children were teenagers at the time. Since then, I have a scan every year and I’m informed about my condition and I believe the doctors have a lot of ammunition to treat it if it comes back,” he says.

Both Martin and McDonnell are part of a NET patient network which offers support to those who are diagnosed with these slow-growing tumours and raises awareness of the rare and little-known type of cancer which usually originates in the gastrointestinal tract. “It helps to talk to people on the same journey as yourself,” says McDonnell.

The main message of the NET patient network is to encourage GPs who suspect something different to send their patients to a specialist in neuroendocrine tumours. About 2,000 people in Ireland have NETs with between 120-200 newly diagnosed each year.

Dr Rachel Crowley is a consultant endocrinologist at St Vincent’s University Hospital in Dublin which was designated as the Centre of Excellence for NETs in 2017. She says that the biggest issue about NETs is that they are extremely difficult to diagnose partly because the symptoms can seem so similar to more common conditions such as Crohn’s disease.

“The zebra is the symbol for NETs because in medical school, doctors are trained to consider the most common illnesses first. We’re told “if you hear hooves, think horses” whereas we want GPs and consultants to also think that common symptoms such as severe indigestion and nausea in a small number of patients can be due to a slow-growing neuroendocrine tumour so we say “if you hear hooves, think zebras”.

The other difficulty with diagnosis of NETs, according to Dr Crowley is that scopes [internal cameras] and ultrasound scans rarely detect this type of slow-growing tumour.

Instead, a CT scan or a gallium PET scan is required to identify NETs. Up to now, patients have been sent abroad for gallium PET scans, but St Vincent’s University Hospital will have the equipment installed in Spring 2019.

Surgery is the first option for those diagnosed with a NET. Patients with hormone-secreting version of NETs will then be given hormone-inhibiting medication to take for the rest of their lives. A small number of patients are sent abroad for a very specific type of molecular therapy called peptide receptor radionuclide therapy (PRRT).

The RTÉ journalist, Tommie Gorman was instrumental in setting up the NETs patient network. He has spoken publically about how he travelled twice yearly for 19 years to Uppsala in Sweden for specialist treatment. “I’ve been told that I was the first person to get the E112 card [for the HSE Treatment Abroad Scheme],” says Gorman.

In 2002, Tommie Gorman made the documentary Europe, Cancer and Me which chronicled this treatment. “I was diagnosed in 1994 and at that time, the life expectancy for only 50 per cent of patients was five years. After that it was in the lap of the Gods but the Gods have been kind to me.”

Since the NETs specialist centre opened in St Vincent’s University Hospital, Gorman has become a patient there.

“Things have improved dramatically for Irish patients with NETs. This is not a benign disease and we have lost some young and middle aged people in the network. But we are now building an Irish version of the Swedish model. The dialogue we have with consultants, the HSE and patients is more akin to a meitheal or co-operative.”