Muiris Houston: Time for my annual search to see if I can come up with some health benefits of eating chocolate 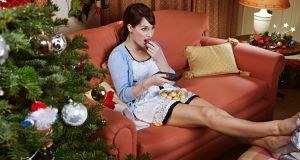 Are your tastebuds salivating at the thought of the first Roses or Quality Street passing your lips since this time last year? Photograph: iStock

Are you getting in shape for the annual guzzlefest that is Christmas? Are your tastebuds salivating at the thought of the first Roses or Quality Street passing your lips since this time last year?

It’s time for my annual search of the recent literature to see if I can come up with some health benefits of eating chocolate.

Here’s one: researchers found that eating nearly one-third of a cup of almonds a day – combined with a quarter cup of dark chocolate and about two tablespoons of cocoa – improved blood cholesterol levels. The study was published in the Journal of the American Heart Association (good) but was part-funded by chocolate-maker Hershey (bad).

It’s actually quite difficult to come up with “clean” research for the health benefits of chocolate. And unearthing positive health news for the kind of chocolate bingeing induced by the opening of a festive tin is well nigh impossible.

Not all scientists are happy with the antioxidant theory behind the benefits of chocolate. It contains flavonoids, substances known to have anti-inflammatory effects and anti-oxidant properties that help mop up disease-causing agents in the body. It’s also full of the amino acid tryptophan, which is an essential ingredient of the feel-good neurotransmitter, serotonin.

However, the theory is good enough for me, a biased and committed chocoholic. Some day, the promised breakthrough will come as a mega-trial produces quality (street) evidence for the benefits of the annual Christmas choccy splurge.

But my research wasn’t completely in vain. A Christmas edition of the British Medical Journal from some years back threw up some tongue-in-cheek research that I’d like to share with you.

Intrigued by the fate of boxes of chocolates given as gifts in hospital, junior doctors in three UK general hospitals designed an experiment. An observer covertly placed 350g boxes of Roses and Quality Street side by side in a prominent location in the main nursing or reception area of a hospital ward. The observers covertly recorded what time each box was opened, and at what time individual chocolates were taken from each box. Over a two-to-four-hour period, they also recorded the role of the person eating the chocolate (for example, doctor or nurse). Before leaving, the observers were asked to record the numbers of leftover chocolates by brand.

Survival time of a chocolate

Some 191 out of 258 (74 per cent) chocolates were observed being eaten. The median survival time of a chocolate was 51 minutes. The model of chocolate consumption was non-linear, with an initial rapid rate of consumption that slowed with time. On average, the time taken to open a box of chocolates from first appearance on the ward was 12 minutes. Quality Street chocolates survived longer than Roses.

The highest percentages of chocolates were consumed by healthcare assistants and nurses (28 per cent), followed by doctors (15 per cent). A lack of data on dietitians is suspicious.

While I hate to criticise such imaginative research, it missed an important opportunity relevant to the forthcoming festive season. The observers were not asked to record which particular sweets were least popular in each box. My money would have been on the hideous strawberry creams.

A London GP shared his practice experience. He noted that among 13 staff, it was usually the brown-wrapped chocolates or toffees that were left forlornly at the bottom. A man of initiative, he included a tin of Celebrations, revealing Maltesers were the most popular choice.

I’m hoping Irish Times readers will help fill this important research lacuna. I’d like you to report back in the new year which varieties were least and most popular from tins of Heroes, Celebrations, Roses and Quality Street. You may record additional information as to the identity of the prime guzzler in your house (granddad, auntie etc) if you wish. Anonymity is assured.

Have a happy and fun-filled Christmas, everyone!

Irish in New York: City ‘looks and sounds like a war zone’
7