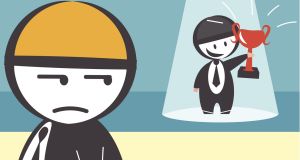 One way to cultivate joy is by contemplating other people’s happiness and sharing the good feelings that arise from it. Image: iStock

I have no time for begrudgery, so I was glad to learn that welcoming the good fortune of other people makes us happier.

I used to see begrudgers as mildly amusing. They hone their bitterness to a fine point and they can generally find something cuttingly funny to say about their targets.

But when all is said and done, begrudgers do more harm than good, sometimes to themselves and sometimes to their victims. I recall a boss crushing the spirits of a junior staff member who had pulled off a coup. He growled at him not to get a big head because what he had done wasn’t such a big deal after all. Actually, what he had done was unquestionably a big deal and I recall watching him wither under the blast of begrudgery.

The online world is a paradise for begrudgers. A journalist whose work exposed a case of mistreatment of women tweeted about the hard work involved in writing a story that could get past the lawyers and still tell the tale. Immediately a begrudger responded with a tweet saying, effectively, “Oh yeah? And how do you think the women felt?”

Stew in their bile

Actually, without the work of this journalist most of us wouldn’t have had a clue how the women felt because we would not have known about them in the first place – to begrudgers such details are of no interest. They stew in their bile and seem to derive some meagre nourishment from it.

I mentioned at the start that being the opposite to a begrudger can make us happier. The research (see for instance, this article in the University of California’s Greater Good Magazine, suggests that enjoying another person’s happiness activates the reward centres in our own brains.

The capacity to enjoy other people’s happiness or success also improves relationships. In educational settings, it contributes to improved performance by students.

The “positive empathy” movement, as it is called, is bolstered by research in neuroscience and social psychology.

I recall my own totally non-scientific example.

When I used to wait for a bus home after work a man who I take to have been homeless would beg money off the queue to buy drink (this assumptions is based on the strong smell of drink off him at all times). One night he speculatively picked up a lager can someone had left on top of a bin. To his inexpressible delight the can turned out to be full. He was so enraptured he carried it along the queue to show it to us before he bore it away.

The queue laughed along with him in his wonder. All of us stepped on to the bus with lighter hearts.

Every time I walk down that street I remember him and I get to feel good all over again. So his joy from an unexpected discovery continues to lift my spirits years later. Had I begrudged him his good fortune on any of the innumerable grounds a begrudger could instantly come up with, I would have denied myself all of that.

In other words, to be able to plug into someone else’s happiness and get a warm glow from is a bit like enjoying free happiness: someone else has done all the work.

The concept of sharing in other people’s good fortune has been around for a very long time, long before it began to be researched.

Bringing joy into your life is seen as a key element of Buddhist philosophy. One way to cultivate that joy is through a practice called Mudita in which you contemplate other people’s happiness and share the good feelings that arise from it.

So my prescription for the begrudgers of this world would be to pack them all off to a monastery on the side of a mountain far, far away until they learn to allow other people’s happiness to spark joy.

They’ll come down from the mountain beaming and with open hearts. And we won’t begrudge them a bit of it, sure we won’t?

Here’s my pick of wines to try this weekend: 11 reds, whites, rosés and fizzes
9