Striking the right chord: how singers should protect their vocal health

Professional singers should regard themselves as athletes, with every vocal performance akin to running a marathon, says a top laryngeal surgeon 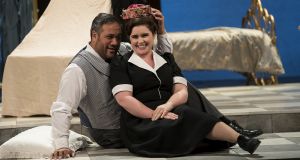 Jonathan Lemalu (Figaro) and Tara Erraught (Susanna) in the Irish National Opera’s The Marriage of Figaro.

This weekend, (Friday, January 31st to Sunday, February 2nd), Irish mezzo-soprano Tara Erraught is curating a weekend of Celebrating the Voice at St Peter’s Church of Ireland in Drogheda. Mixed in with the concerts and masterclasses, she is presenting a lecture by laryngologist and laryngeal surgeon Dr Paul Kwak of the New York University Voice Center and the NYU Department of Otolaryngology.

When I ask him why anyone would consult a laryngologist about singing, his answer is clear. “You don’t,” he says, “it’s about anatomy and health of tissue.” He sees his role as helping singers understand the physiology of the voice, the mechanism of singing. “Singing, or any use of the voice,” he says, “is much different from using the legs or the arms or any other kind of physical activity, in that you can’t see it.

“You’re basically marshalling two little folds of tissue inside the neck, powered by the lungs, and it can all seem a bit mysterious.” An examination by a laryngoligist, he says, can give a singer “a tool to understand his or her own instrument”.

The range of problems includes things we all know about – the effects of a respiratory infection – and others that most of us never think of, what he calls phonotrauma. This includes haemorrhages, “bleeds into the vocal cords, or an acute amount of swelling just related to excessive demand or excessive use”.

The chronic problems he sees mostly relate to voice use, “whether it’s muscle tension issues that compromise the efficiency and the mechanics of the voice, or lesions, like nodules or polyps or cysts, which can arise over time”. He views singers as athletes, and says that, like athletes, they have a fairly predictable set of issues “arising from the larynx and the tissue that they use when they sing”.

‘Balance between activity and rest’

It’s important for singers to focus on “the balance between activity and rest”, vocally speaking. “Having singers understand themselves as athletes is such a helpful metaphor for understanding the limits of their instrument. It’s not just a metaphor. Sometimes people think it’s a thing that I just say to make singers feel like they’re working really hard. But they are working really hard. If you look at the amount of force and energy that passes through the larynx during any given vocal performative task, it’s immense, of the order of millions of collisions of the vocal folds over the course of an opera.” He sees it as “close to running a marathon with the larynx in demanding opera roles”.

He deals with singers at the Metropolitan Opera and on Broadway. The schedules of Broadway musicals in New York city, he says, are “kind of ludicrous – to do eight shows a week with no rest or recovery, that’s like running eight marathons a week with no rest or recovery”. It may seem simplistic, he says, “but the tissue needs to rest and recover for long-term durability”.

Another important way to preserve the health of the tissues is hydration. “This, too, becomes a kind of a trope in the popular health literature, to the extent that it becomes sometimes meaningless. People say, yes, you should drink a lot of water. But the reason for that is actually that the vasculature, the blood vessels that feed and nurse the vocal folds, are quite sensitive to changes in the body’s hydration status. And dehydration, we suspect, makes singers more susceptible to injury over the long term.”

To achieve a balance between activity and rest, he says, “means not just singing, but all voice use”, so speaking comes into the reckoning as well as singing.

I remember myself having difficulty scheduling an interview with the great Austrian baritone Wolfgang Holzmair, because there were days on which he never spoke, not even to the pianists he was working with.

“It’s one thing to have to sing a two- or three- or four-hour opera. But you might also have had a 30-minute conference call with your manager, or an interview, or you may have just wanted to talk to your mom. All of that voice use accumulates over time and you don’t really keep track of it. One of the simplest things that singers can develop an awareness of for vocal health is rest versus activity.”

Everyone’s physiology is individual, and to illustrate this Kwak instances how he could never aspire to getting the same results from the use of his time in the gym that his personal fitness trainer can achieve. “I could do 800 sit-ups a day and not have his abs. We all have different bodies that respond in different ways to challenge and exercise. I look at Rob, my trainer, and ask how can he have that kind of athleticism and that kind of body when we are basically doing the same workouts.”

The same disparities affect singers. He calls it “body privilege”. Some people can learn how to yell without damage. “But I’ve seen singers who get a vocal haemorrhage with a sneeze.”

Tara Erraught herself caught a cold before performing in the Veronica Dunne International Singing Competition in Dublin in 2007 and, following the advice of her teacher – Veronica Dunne herself – got help through acupuncture.

Vocal health was also dealt with when she studied at the opera studio in Munich, and she now carries everywhere two images of her vocal cords – in a healthy state, and when she suffered from pneumonia. “Not everybody’s muscles look the same.” When flying she uses a HumidiFlyer mask for hydration and protection from other people’s illnesses, and, in general, drinks “unbelievable amounts of water”.

Soprano Suzanne Murphy, founding director of Opera Collective Ireland who now teaches at the Royal Welsh College of Music and Drama, says singers should “not force the voice, always warm up gently, be aware of the breath, be careful about what they drink and avoid stress”. And, as her own teacher [Veronica Dunne, again] advised, “you should at the end of an evening be able to repeat the last 15 or 20 minutes of singing healthily”.

Always have something in reserve. Good advice in life as well as in singing.