Beating bad sinuses: The magic of shooting salt water up your nose

‘So you’re happy to look after your teeth and not your nose?’ said my doctor. Wise words 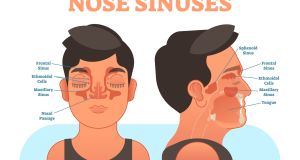 Salt and baking soda is a treatment maybe as long as 100 years-old. Photograph: iStock

Of course I didn’t see the joke coming. I was in the doctor’s office and my guard was down. It was the first meeting with the new GP – a handover of business after the retirement of my old doctor. I was talking at good length about my “bad sinuses”.

And they are – or rather, were – “bad sinuses”. I’ve tried to count the sinus infections I’ve had. I can’t. But there have been multiple per year since childhood and with them, antibiotics and headaches that feel like an alien is bursting out of your face. Throw in a couple of inhalers and some hay fever and you have “that person” – I can’t roll in the grass or sniff Christmas trees.

The doctor stopped my spiel and asked a question more befitting a dentist. It went like this:

“Do you brush your teeth?”

Ill-health, antibiotics and the number of GP appointments all tend to recede with regular cleansing

And there you have it. Baited and sizzled. Through mild embarrassment and less mild confusion, I registered that he was talking about sinus rinsing. In short, that’s the practice of firing a saline solution up one of your nostrils and allowing the liquid cleanse the crevices in your head of allergens and mucus and other unwanteds before exiting other nostril. Sometimes it exits via your throat. Switch nostril and repeat.

I told the GP I’d heard of it. I even owned the contraption – a sort of squeezy bottle – and maybe did it the odd time when the pollen was bad, or if I had a cold. I was told that wasn’t enough.

Not surprisingly, he was correct. I’ve been doing it regularly enough since the end of 2016 and I’ve had one sinus infection since. (That came at the beginning of 2020, after I lost the sinus-rinse bottle.)

The device I use is the Neilmed Sinus Rinse, but there are others. It costs €10-€15 and comes with 10 premixed sachets of salt and baking soda to start; then you buy refills. That mixture, according to the Dublin doctor and author Paul Carson, is well established: “Salt and baking soda is a treatment maybe as long as 100 years old. People used to sniff salt and baking soda off the palm of their hand,” he says.

I tell Dr Carson, an expert in allergies who runs a clinic in Sandymount, Co Dublin, a bit about my miraculous turnaround. He’s not surprised. Within a very short time, I realise I’ve found a champion of sinus rinsing more enthusiastic than my GP.

“It would be something I would recommend as many as 20 times a day,” says Dr Carson, half-joking, I think. Thankfully, he provides me with a more manageable target: brush your teeth, comb your hair and wash your nose before you go to work. Regularity. I’m seeing a pattern.

“People are being advised to make sinus rinse their best friend, because it nurtures the nose, keeps the area clear and healthy – and it is a good preventative in terms of people who are prone to sinus problems,” he says, adding that ill-health, antibiotics and the number of GP appointments all tend to recede with regular cleansing.

With the change of seasons, rinsing your sinuses is a cheap enough experiment which may pay off in saved trips to the GP

The process of nasal irrigation is an old one, most likely developed in ancient India and closely linked with yoga practices, according to the available literature. A common sinus rinsing device is the neti pot, which looks like a small teapot. The neti pot is gentle, and uses gravity to wash the sinuses at a soft pace.

The practice made its way from Ayurvedic to western medicine in the late 19th century and has since found further success as an inexpensive way of managing a range of nasal problems. It has gained more mainstream popularity in recent years, with studies supporting its usefulness in the prevention of chronic rhinosinusitis, sinusitis and allergic rhinitis. Some research points out that the exact quantities of salt and baking soda required have not been standardised. It’s also vital the water isn’t contaminated – cooled, boiled water is recommended.

The process can be fairly unpleasant. Especially for witnesses. It’s not for everybody, but those who take it up tend to swear by it – Dr Carson uses the word “convert” a number of times. Proactivity is key; waiting until you’re already “bad” is pointless – the rinse can’t properly do its work.

All of the above will resonate with other “bad sinuses” people. But that population, which Dr Carson says sits at about one in four , will soon grow.

“One of the things that is very important is to understand the surge in sinus problems,” he says. “The number of people with recurring sinus problems or persistent sinus problems will go from 24-50 per cent within the next decade. It is very stark.”

Climate change and other environmental factors play a part in that acceleration (the HSE lists air pollution as one cause of sinusitis), as does a general increase in the overall number of people suffering from allergies. “In terms of ill-health, it’s almost like a perfect storm of bad factors coming together at this particular time in the world’s history to make them more prone to sinus problems,” says Dr Carson.

A lesser-known perk of maintaining nasal health is its link with asthma. “There are plenty of published papers showing that asthma sufferers also have, at the same time, an existing sinus problem,” says Dr Carson. “And that they are relying purely on inhalers for their asthma and not having their nose and sinus issues dealt with appropriately.”

The doctor says treating sinus problems can in some cases help alleviate asthma symptoms; another upside I can attest to.

With the change of seasons, rinsing your sinuses is a cheap enough experiment which may pay off in saved trips to the GP. If it works as well for you as it did for me, you’ll also ingest fewer antibiotics, by quite a margin.

“But people want to help themselves. And you can’t help yourself any easier than taking salt, baking soda and water up the nose.”