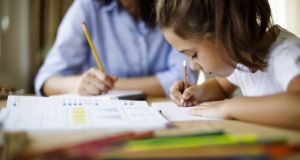 I’ve established myself as quite the homework rebel at this stage. Photograph: iStock

I’ve established myself as quite the homework rebel at this stage, to the point that I find myself tagged in all manner of homework news, discussions and even political party manifestos across social media as the topic comes under scrutiny. My rebellious notions have not gone unnoticed by teachers across the country, who message me in support of its abolition, nor by my own children’s school, where I think the principal may even dread to see me come knocking.

And it certainly hasn’t gone unnoticed by my eldest, who regularly informs me she wishes I had felt so passionately against it when she was younger.

“You live and learn,” I reliably inform her. “And if you don’t take it on board, sure what’s the point of learning at all.”

A recent study by DCU revealed that a significant number of our primary school-aged children were struggling to run, throw or kick a ball properly – revelations which seemed to alternate between causing a lot of consternation and the usual parent bashing.

Screen time, predictably, was blamed by some. And there are few parents among us who can honestly say they don’t find the lure of consoles and devices a constant war in the waging. But it’s a simplistic notion to lay all the blame there, even if it is a contributory factor.

We’re a time-poor society, working long hours, dealing with long commute times and facing different challenges to the generation before. One uncomfortable truth is that this has a knock-on effect on family life and children’s lives. While protests came from parents adamant that the study was not reflective of their children’s situation, and included the list of activities their children engaged in, those for whom the opposite was true remained comparatively silent.

No surprise really, who, after all, wants to shout out on social media that their children can’t do those things or that they can’t afford the time or the money necessary to involve their offspring in a plethora of activities.

As parents, the majority of us are doing our best in the respective situations we’re in. And while there’s no magic wand that can be waved to change the various financial restrictions within different families, there is one thing that could be accomplished by an end to primary school homework for us all. It would give families back time. Time which could be used for many things, including getting our children outside to play – something that would have to help improve our children’s fundamental movement skills.

It would help with the childhood obesity crisis we’re facing if they had the time to be outside and active, playing freely as children should. It would help promote better mental-health practices, if the balance between work, rest and play could be that little more equal.

I’ve argued against homework for a long time now, until another social media tag and its timing made me wonder if, in fact, there’s a type of homework I could get behind.

I hadn’t been to the Peace Proms before. I hadn’t a clue what to expect and to be honest there was a part of me slightly resentful at having to battle the rugby crowds and traffic en route when I had deadlines looming.

But there was an excited boy who knew his Queen-loving mother was in for a treat. Two and a half thousand primary school children from across the country sang in unison with the Cross Border Orchestra of Ireland. Connectivity through music. Songs with meaning. It was impossible not to be moved by the spectacle and the sound.

At the end, I noticed I noticed a tag on my phone relating to a school I’d read about previously. A school in Cork which had ditched traditional homework in favour of acts of kindness for December. I’d been intrigued at the time and as echoes of John Farnham’s You’re the Voice and particularly the lyrics “we’re all someone’s daughter, we’re all someone’s son” rang in my ears, I was intrigued again.

Most of our schools operate through an ethos of kindness but, as we all know, actions speak louder than words. It’s one thing to suggest being kind, it’s entirely another to actively practise kindness.

And just like traditional primary school homework has continued because we’ve always done it, kindness could become the new force of habit with benefits for all.

In the times we live in, and as we raise the adults of the future, we’ve never needed it more.

Read: The school that doesn’t believe in homework